It’s a special treat today folks!  With a complete break from protocol, I’m bringing you the fruits of a bird outing from just a couple of weeks ago.  In relationship to my usual delays in getting my babies out of the camera and into these pages this is nearly light speed.  If we were in a jet there would be a HUGE boom about now.  There is a couple of reasons for this promptness.  One being that the images were already processed – literally the day I took them and the other just due to the excitement of getting this bird in the tin. 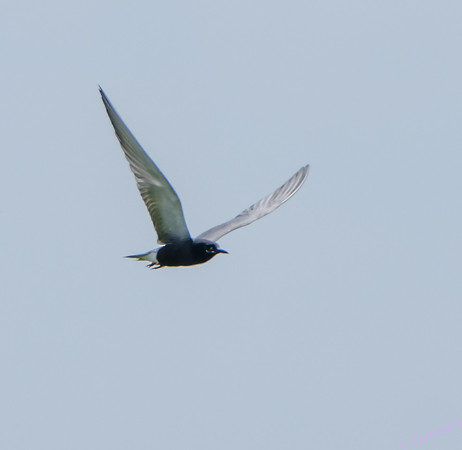 That my friends is a Black Tern.  Without question, this is a new addition to my Birding Life List and I owe my brother for having the chance to get it.  We had recently signed up for the Illinois Birders Exchanging Thoughts (IBET) Yahoo group.  I am not technically sure if Ron saw all the posts that were occurring regarding the Black Tern sightings and decided to head down there or if he went there on his own first and then saw all the posts.  Regardless, he went over to the Hebron IL. bike path and checked out the scene.  Sure enough, there were Black Terns hanging out in a distant pond/lake.  It really looked a bit like a marshy area but apparently it is referred to as Goose Lake by all the birders in the area.  Note, there is absolutely no signage anywhere near this area that actually refers to it as “Goose Lake”. 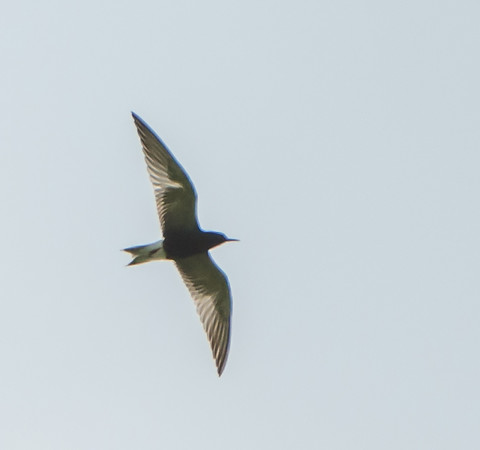 Hit the jump to read a bit more about the Black Tern and see a couple more pictures.

He was even lucky enough to get the shots in the tin upping his own bird count in the process.  Linda and I were up in Libertyville on a Friday of that same week and made some time to head over there ourselves while on our way to Lodi, Wisconsin for a family reunion.  Linda got us there without issue and we lathered up in bug repellent heeding the advice of every single person who had reported on the sighting.  We confirmed there was a gauntlet of mosquitoes under the canopy of trees that lined the first part of the trek out to the lake.  Linda eventually turned back drained of about a gallon of blood.  The thought of a new bird kept me going although it was awful – the repellent was nothing more than a cool lemonade drink on a warm day for those bloodsuckers.  Halfway out there I met up with two gentlemen heading toward me on the path.  Noting their spotting scopes I started up a conversation.  They had just come from the lake and confirmed the Terns were still there along with Yellow-Headed Blackbirds and songs of Marsh Wrens.  Now excited, I thanked them and ran.. I mean walked the rest of the way to the lake area. 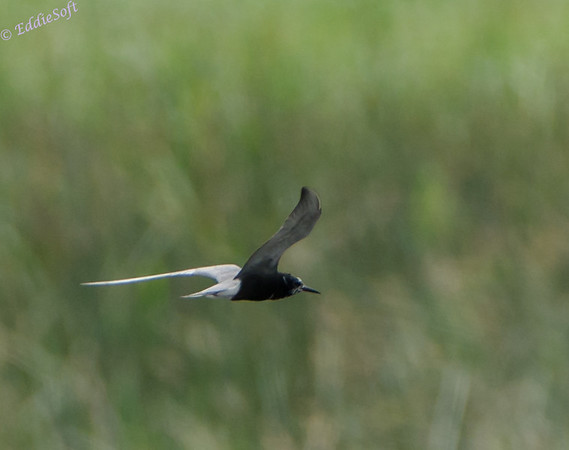 The first thing I noticed was a person had walked all the way out to the lake and was slowly making their way back through the weeds and brush.  It took her about 15 minutes to make it back to the path.  Ron had met a birder there when he was there and was wondering if this might be her.  We talked a bit and learned she was with the Conservation Dept and was checking the water level.  Her assessment was they got the level just perfect (they have controls that allow them to manage that).  Her litmus test was the fine bird specimens they were able to draw to the area and the fact there were a lot of newborns out there.  I did end up asking if she was the individual Ron met.  It was not, her name was actually Cindy (sp?) and not Suzanne.  At that point it was time to get to work.  She had stirred up the parents who were now flying around like bats out of hell weaving, diving and everything else they could do to make it nearly impossible to get a decent picture of them.  To say these Terns have acrobatic skilz is like saying clowns simply look different.  Their more like the Cirque Du Soliel of the birding community.   I know Ron struggled to get focus on them and I was using every bit of strength I had to keep the Beast in track mode.  I  probably took over 300 pictures of them – the few you see here are the only ones I’m really willing to show the public.  Still not the best, but based on what it took to get them – damn happy. 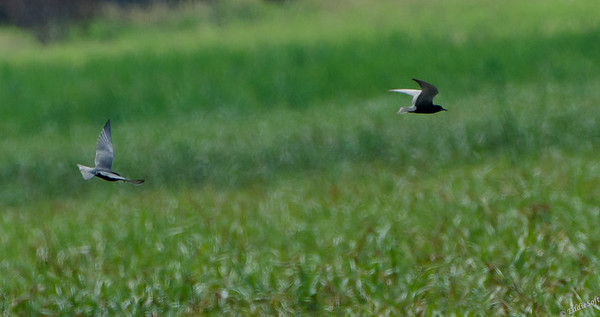 Eesh, out of pictures.  Let’s jump quickly to the Cornell site and see if there is anything worth mentioning about the Black Tern.  Wow.. talk about a let down.  They have nothing collected about this cool bird.  Their cool facts consist of telling us they are a social bird.  They eat insects and a disappointing common bird in steep decline Conservation Status.  I probably learned more about this bird just by watching them there – clearly they like insects, have amazing flying abilities, nest along marshes and spend time in Northern IL.  One odd thing that doesn’t make sense to me is they list the central and southern states as migration regions.  The Northern states and Canada are their Summer region.  So here is the question.. where are they migrating from?  There is nothing shown in South America unless it is a thin blue line on the northern coast.  If that isn’t where they all go they must be simply migrating down only to fly back up.  Quite intriguing.

Well, that’s it.  A hot off the press bird for your enjoyment!  Now to go put that check mark in the book.

3 thoughts on “Taking My Tern”