Well folks, I have officially unofficially entered in a new phase of my life as of 4:00pm today. I say unofficially in the sense I am still employed, but on permanent vacation until February 1st of 2021 until it becomes technically official. So I still have my work computer and will still help my colleagues out if they come calling in an emergency – I do not expect that to really happen as I’ve been training my replacement since May and he along with the rest of my coworkers are plenty capable of dealing with the day to day decisions that come with the job. That means yours truly has a lot more time on his hands for those tasks that have been neglected over the years – not to mention a honey-do list that was apparently started from what I can tell at least 5 years ago. She was nice enough not to hand the ream of paper into about 4:03pm ha. No worries, I promise to find some time to get my posts out. I had intended to give you a link to a gift I was given during my work send-off happy hour. After about 2 hours of fighting to get it to properly process on Smugmug I had to give up (hey, I’m on tight retirement schedule!). Anyway, it was a personal retirement goodbye from a Mr. James Faulkner or should I say Randyll Tarley from Game of Thrones. As someone who happens to be a big fan of GoT, I have to admit.. that was awesome. In fact, the entire celebration was wonderful – The memories – they highlighted the funny and embarrassing ones of course – and seeing everyone’s faces was truly overwhelming. As I had predicted in a previous post..incredibly emotional. Told my wife afterwards I had to retire now as I couldn’t possibly go through that again. We’ll see how life after work goes. For now, let’s get this kicked off on the right foot and get straight to our featured feathered friend of the day. 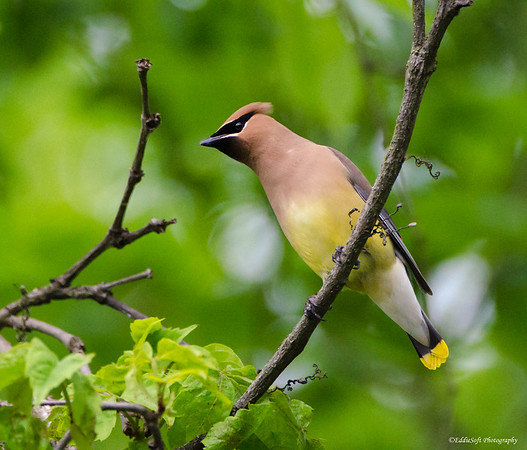 Thought I’d bring you a bit of color in celebration of the day. It has been pretty miserable around here weather-wise as of late with cold winds, a dusting of snow and pretty much 3 days of overcast and rain so far – probably all the tears I was trying to hold back during the celebration. For those not familiar with our brightly feathered friend, it is a Cedar Waxwing. One of the few really colorful birds that hang around in our region through the cold seasons. We do have the Northern Cardinal and that ass of a bird the Blue Jay which definitely add color to the dreary winter backdrop where the other brightly feathered birds like the American Goldfinch put on their dull coats for the chilly season. 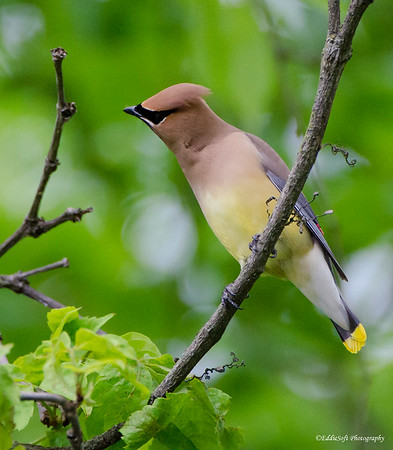 Hit the jump to learn a bit more about our smartly colorful friend!

These specimens were found while birding at Chain O’ Lakes State Park up in Spring Grove IL. a mere three years ago in June 2017 (yeah, I know, but truthfully, I’ve been giving Ron a chance to start posting on the “He Who Owes Me Bigly” event and as of late he’s been extremely busy so cutting him some slack). Prime directive once I get through the first 2 inches of stacked honey-do papers is to get all the really old entries popped off the post queue. Second directive is to proofread my good friend Brad M’s sure to be upcoming book on photography. Whoops, I digress, let’s get back to our Waxwing who has been sitting here patiently for some attention. 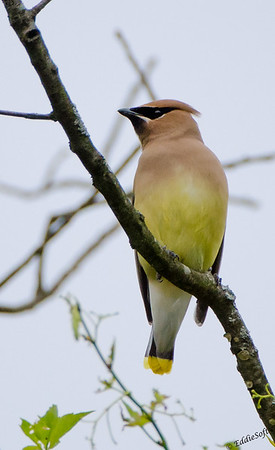 The Cedar Waxing is a rather distinguished looking bird if you ask me. Sharp lines on the top and bottom half that frame an exquisite blending of brown and yellow across the breast. The bent back crest almost looks like the end of a feathered fountain pen complete with a tail that’s been dipped in yellow ink. The black mask is accentuated in white giving it a much more crisp form compared to its burglar counterpart the Common Yellowthroat (link here). My favorite feature of the Cedar’s color palette is the feature that led to its name, the red colored waxy secretions on the tips of the secondary wing feathers. Guess which part I ALWAYS struggle to get in the tin – congratulations if you said the red colored waxy secretions on the secondary wing feathers. Not sure what it is with the specimens I come upon, but they never want to give me a chance to tin them. Even went all the way back to my first series on this species back in January 2014 (link here) – no luck there either. Cornell’s website mentions they are not always easily seen – that I can attest to. If you look real close at the second image in this post (two up) you can just barely see a glimpse of the red about halfway down the wing. I’ve made a note to get a better shot of those waxy elements now that I’m on a long vacation. 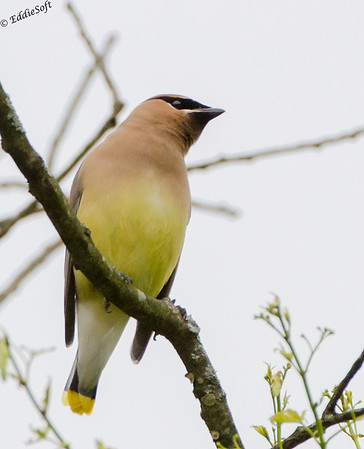 Oops, out of shots, better get to some interesting tidbits. So the Cedar Waxing species has an interesting region map. They breed up in Canada and then some tend to push a bit south to basically upper half of the US for year-round where some of them say screw you to the cold that takes over here in the winter and get their dipped yellow tails down to Costa Rica. You usually don’t see those wide bands on region maps between the breeding, year round and the nonbreeding – especially with the year round on top of the nonbreeding. Apparently the scientist are still trying to figure out the function of the red waxy tips beyond a possible attraction of mates. Pretty sure it is just to frustrate the hell out of me trying to get pictures of it – damn birds! Lastly, if you happen to be in the northeast and see a Cedar with an orangish tip, Cornell states that is due to a high honeysuckle berry diet during tail development – wonder what would happen if they ate too many blueberries!?!

Will call it there for the first unofficial official retirement post .. stay tuned folks, should be a healthy dose of posts coming your way once the holiday passes.