Hello from isolation state! Looks like my broke state of Illinois is heading for another lockdown starting this Friday. One day after my planned official goodbye to my “corporate” family. Due to the pandemic precautions, we have been required to work at home since March and it looks like that requirement will remain in effect until at least April of next year. I would not be surprised if that gets extended. Truthfully, my IT organization has limited impacts to remote working as we are typically engaged in projects that span to all parts of our enterprise covering all parts of the world. I’ve had the pleasure/inconvenience (pick your viewpoint) of conversing with team members in Asia/India at 10pm, then working with our European members the next morning followed by our North/South American colleagues throughout the day. It has been a wonderful career allowing me to engage with some of the brightest minds across the globe, be introduced to new viewpoints and certainly learn to broaden my own perspectives as a result. The work deliverables I think will be easy to let go – I’ve mentioned before that working on high profile projects (some in the multi-billion dollar range) can take its toll. What I will definitely miss are the relationships. Some I have enjoyed for the entirety of my 31+ years and many others developed over that continuum. I remember the retirement gatherings I used to attend during my early career days listening to the guest of honor refer to his coworkers as family and thinking that was odd. Now I know exactly what they meant and I know exactly how they felt as they said their goodbyes. All the pressures I’ve encountered during my years at work are probably going to pale to how much stress there will be tomorrow trying to keep my composure in front of a computer camera. A virtual goodbye probably has a reduced emotion compared to directly shaking the hand and thanking them for all the advice, all the mentoring and for being an invaluable sounding board that directly lead to my successes. Hoping one day I can take the time to do that once this pandemic crap is past us although clearly it will be more difficult say goodbye in person to my international colleagues. Many of them would travel to the US for our architecture summits I coordinated so we could at least meet face to face once a year – and that, of course, was canceled in this my farewell year.

We will see how this goes tomorrow, but all this talk of family led to today’s featured topic.

Although clearly on a different level, it seemed appropriate to bring you a series on a bird family. Now, I have brought you pictures of little goslings before (link here), but they are just so damn cute I can’t stop taking pictures of them. I am not a good judge of age when it comes to birds – not like they come with birth certificates or anything of the such. What I can tell is relative age groupings from the early chicks/goslings seen here, to the more juvi state as they start taking on more of their adult feathering and then finally adulthood. 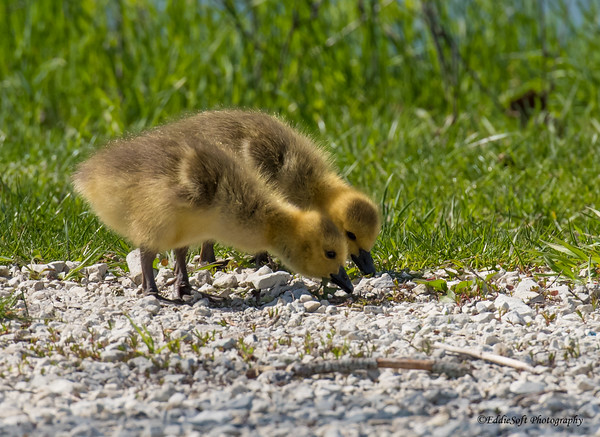 Hit the jump to read more about our family of Canada Geese.

The transformation to the adult plumage happens by the end of the 3rd to 4th month range. So in that time, these little balls of feathers mature rapidly under the watchful eyes of their parents. According to an Indiana Department of Natural Resource website, the parents will defend their young “vigorously” for the first 10 to 12 weeks until they are sufficient to fend for themselves or if all else fails take flight. These little cuties still need to grow into their wings, for now, focused on exploring the new world and learning required survival skills that will serve them through adulthood.

As a person who happens to focus on the behavior aspects of wildlife, it is this span of a bird’s life that intrigues me the most. I could sit all day and watch the interaction between gosling and parent, intra-gosling behavior and of course their exploration will all the new sights/sounds/smells life has to offer. Over the years of doing this I’ve been able to pick out the meek goslings, the brave souls, and even the clown from time to time. 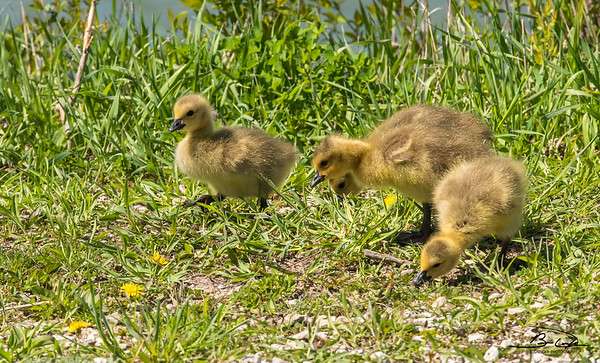 Based on purely observations over the years and extrapolation to other wildlife offspring I’ve been able to study in the field, I’ve surmised that the meeks will probably not make it to adulthood – lacking the confidence to take action or not being adept at problem solving are not traits that enable you to navigate life’s dangers. For the families that I have been able to observe for extended periods of time, those are the ones that go missing as the days go by. The bold last longer than the meek, but oddly enough, I’ve seen a high rate of those go missing as well. See this especially in Raccoon families – there is always one that is the first to bolt out into the open to get to my feeders (sore subject of course) and the last to leave when the mother heads out. I suspect, those are a bit too confident and might be skewed as to their own ability to protect themselves from the evils that abound. It’s the middle tempered offspring that tend to have the best survival rates from my own personal observations. 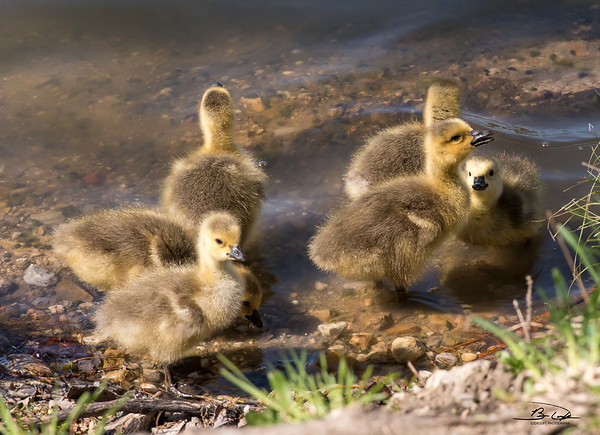 Now, keep in mind those are purely opinions formed from observation, a dose of speculation and cross species correlation – clearly not a rigid scientific experiment as I do not have the ability to mark the individuals for exact future reference and when people see me trying to talk to them .. you know, asking them directly what they are thinking in an attempt to get verbal responses to my quandaries… fellow humans start making assumptions about my mental stability. Hey, it doesn’t hurt to ask! 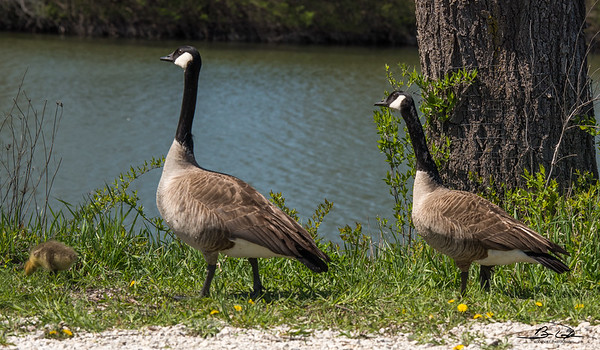 A bit of background on this series. It was actually taken in Champaign IL at a place called Kaufman Lake (link here). Oddly enough, having attended school there for 4 years, I never heard of this place. Ron actually told me about it thanks to a conversation he had with a fellow birder while checking out the Swallow-Tailed Kite (link here). Which, by the way, is still in my top list off cool birds I have had the pleasure of witnessing in the wild. Although this is a rather small place (29 acres), it is a really nice setting that sits in an urban setting. Complete with a trail around the entirety of the lake, this park provides a pleasant birding experience. 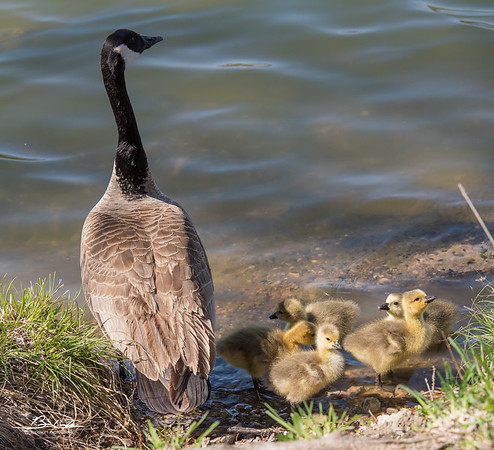 Our visit for this series occurred in April 2018. I cannot remember exactly what occasion brought us to the area – best guess is the annual running of the Illini Marathon based on the timeframe – note, only thing that makes me question that is there’s ALWAYS crappy weather for the Illini Marathon. Not sure if I can recall a time where I wasn’t running in a downpour, or wind or cold temperatures or more likely ALL. My first marathon was there and it was pouring down rain the entire time, cold (which isn’t a bad thing when it comes to my sport except I came down with a bit of hypothermia afterwards) and a 20mph wind that was directly in my face for miles 23-26. The brightness of these shots clearly does not fit the norms for that time. 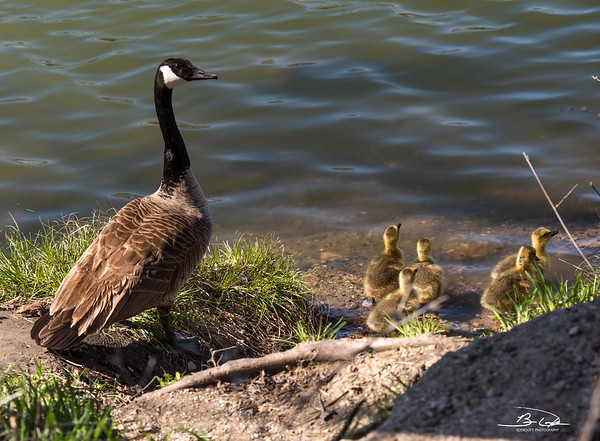 Immediately upon arrival at the park, we spotted these two proud parents escorting their offspring around the grounds. A sucker for babies, I was out and taking shots microseconds after Linda brought the vehicle to a stop. Aware of the aggressive nature of the adults, I tried to keep my distance not wanting to get my subjects riled up. This also required me to keep Linda out of sight as her reputation proceeds her when it comes to the Canada Goose lore – for another post, but ask Linda sometime about her almost killing a group of defenseless Geese while playing golf. Go on, ask her, she’d love to tell you all about it (then come talk to me and I’ll set the record straight ha). 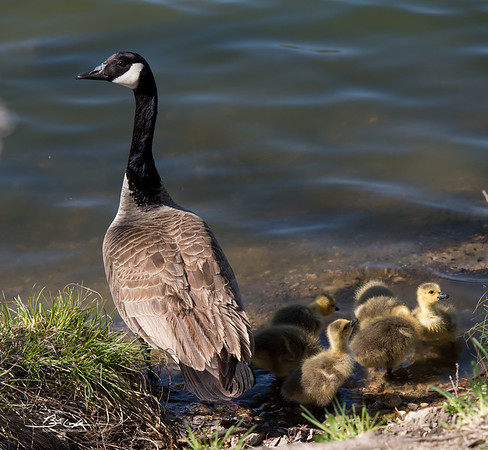 Eventually, the proud parents guided their precious offspring to a small path down to the lake’s edge. Under mother’s watchful eyes, each chick marched its way down, plopped into the water and awaited the day’s lessons. I could have stayed there watching them for the rest of the day as they brought back memories of my own early upbringing – must say the Goose’s swimming lessons were a bit more involved than my own – Dad showed me the basics and tossed me in – needless to say I learned to be a pretty good swimmer pretty damn quick.

All I got for you today folks – wish me luck tomorrow, some of my friends have been in the IT trenches with me for a looong time and we’ve been able to celebrate the good times and cover each other’s backs in the lowpoints. Feels kinda like I’m abandoning my post… then I noted I’ll get to sleep later in the morning – sorry folks, time to go ha!

16 thoughts on “A Family Goodbye”