I think my body may need a quick recharge as tonight’s 7 mile run was a bit of a struggle. Apparently the 16 miles I ran on Sunday and the 6 previous weekends of at least a half marathon distance has finally caught up with me.. or all the hours spent working on trails on the off days. Regardless, Bri needs to rest tonight. Good news for you is rest for me equates to ample time to push out a post. Tonight’s featured friend should bring a smile to the face of fellow birder blogger HJ over at Avian 101 (https://avian101.wordpress.com/). 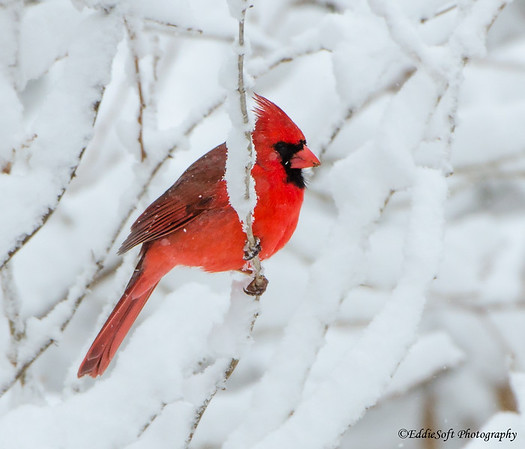 Catch one of HJ’s Red Galleries if you want your fill of these brilliantly colored Northern Cardinals (and, of course, be sure and catch his other gorgeous bird shots). I do not have near the number of Cardinal shots that HJ does, but this bird has been featured several times in the past – one from the summer (link here) and one from the winter (link here). Today’s series actually goes back to some winter shots from my backyard back in March 2018 (yes, another series from like yesterday hehe).

Hit the jump to see a couple more shots (literally) of this crowned royalty. 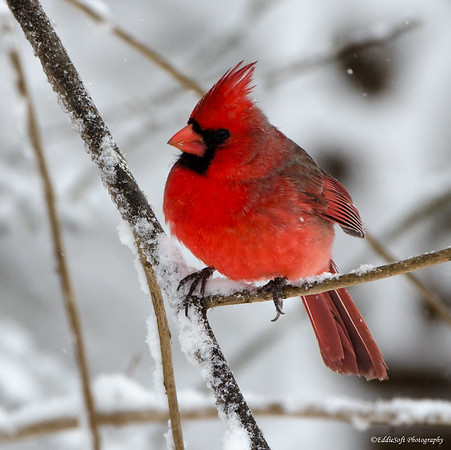 I was about to comment on how the Cardinal is probably one of the most recognizable birds out there with their Christmas themed coloring and royal crown, then decided it would be prudent to verify that with a quick check on their region maps. Surprised to find that this full bodied bird (seems more polite than saying chubby, fat or plump) pretty much stays in the eastern half of the US and then a jaunt into Central America. Not sure what is going on at our northern border as they appear to have no love for Canada – no Terrance and Philip for these birds! So, in the off chance you are not familiar with this bird or a fan of St. Louis sports, this lovely creature is the official state bird of SEVEN states (my broke state of Illinois, Indiana, Kentucky, North Carolina, Ohio, Virginia and not to be outdone, West Virginia). Note, school children picked the Northern Cardinal for Illinois back in 1929. That pretty much puts that 3 state braggart Goldfinch from the previous post in its place. The two do have a similar trait – the females draw the short straw on the pretty colors and forced to hang out in significantly subdued feathering. The female has a few red highlights in the crown and feathering, but mostly a drab brown. The bright orange bill is shared between both sexes and actually stands out much better against the female’s palette. Put either of these birds against a snow background and you have yourself an extremely nice composition worthy of any wall in the house. It was still snowing at the time of this shoot – check out the flakes as they pass our subjects. Shutter speed was cranked up to combat the exposure blowout from all the background white. 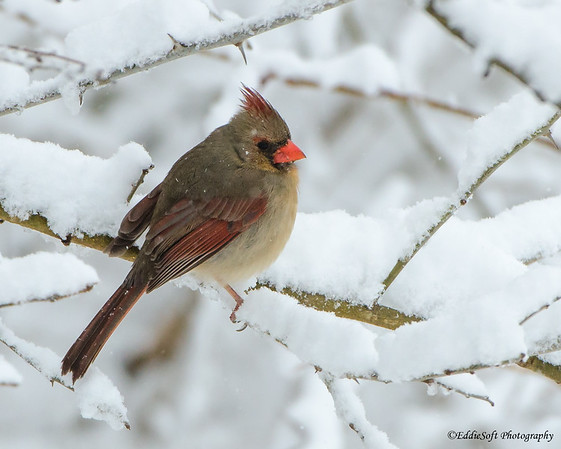 We have the privilege of watching the Cardinal year round – probably a third of my seed gets consumed by them as they are typically one of the first to arrive and definitely one of the last to leave in the evening. I tried to find some shots I took of the 30+ Cardinals that happen to be hanging out together in the trees around the feeders. Unlike the Finches, the Cardinals do really like to eat next to each other. One or two will flutter over to the feeder, eat a few seeds and then get pushed away by a couple more Cardinals in the next wave. This continues (likely cycling but I can’t tell them apart) until the group has their fill. According to Cornell’s website this community behavior changes during the breeding season when the Cardinal becomes extremely defensive of their nesting territory. An interesting tidbit so important that Cornell listed it twice in their facts sheet.

Unfortunately, out of shots. A short one today although I do happen to really like all three of these shots. Stay rested and healthy everyone as we are halfway through another month. By the way, this is Linda and I’s official 30th anniversary of our engagement and the 31st anniversary of our official dating date – what can I say, I like to keep my life simple and this strategic planning means I have to remember one less important date. Unfortunately, we used our company’s summer shutdown for our wedding date or I would have had all three lined up!!!!

7 thoughts on “All Hail the Crown”