Greetings all! Hope you enjoyed the deviation from all the usual feathers in the last post. Always good to feature something other than birds to give everyone a break. Although I have been getting some feedback requesting I stay away from the Snake topics. Which means, of course, there will be slither posts coming sometime in the not too distant future hehehe. I think it best we all try to face our fears or there’s little chance to get comfortable with them. I can state for a fact that standing on rafters three stories up while building our house definitely helped quell some of my height fears. Been a dreary week around here with all the rain (needed for sure), but there is a lot of woods work to do before the upcoming Halloween event. I can’t afford to be sitting around here staring out the windows. Figured it would be a good time to feature this. 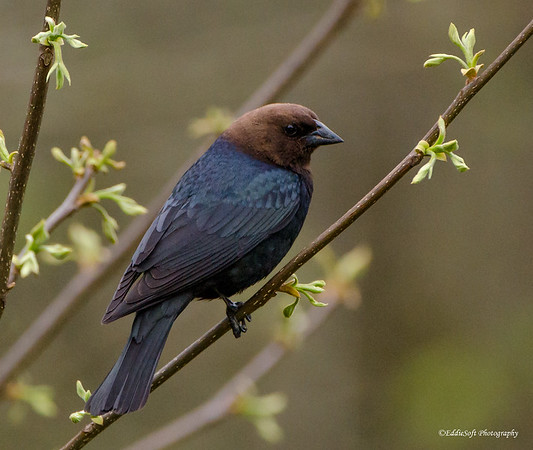 Oh, before I forget. With the time crunch from the Halloween work and some key deliverables due on aggressive timelines at my day job, I’ll probably get these posts out shorter than usual – content and timewise. Everything should be back to normal in October and I can finally take a break and relax a bit – been a long year so far and just need to get over this last hurdle. Now back to this jerk of a bird. 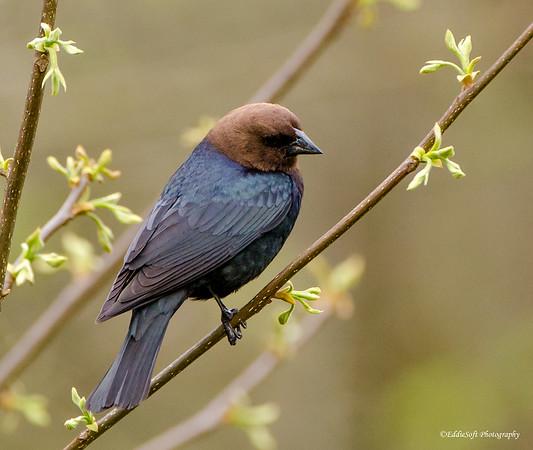 Hit the jump to read more about this lowlife bird.

Nothing fouls my mood in a day quicker than when one of these show up on the lot. Ron can attest, there are a few birds on my absolute hate list and this happens to be in the top 5 for sure. Ironically, it also happened to be raining at our house back on a May day in 2018 when I took these shots. If there is one good thing about rain when it comes to photography the moment the rain lets up you get a deep, rich coloring for your photographs. Now, that comes at a cost of ISO or shutter speed, but we can deal with that in other ways. 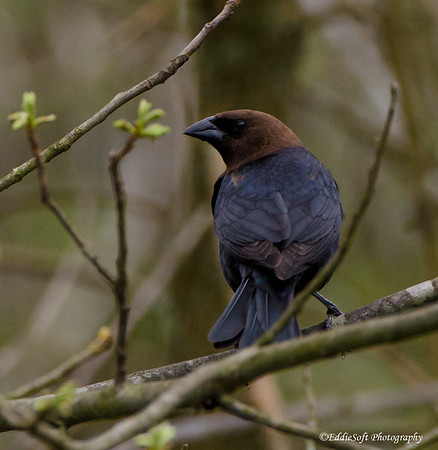 Already had this series processed on another monitor which tends to over-brighten the images – will likely pop back into the digital darkroom and boost the vibrancy a bit on these to match the tone of the shot a few back. That is if I want to bother looking at this craptastic bird again. 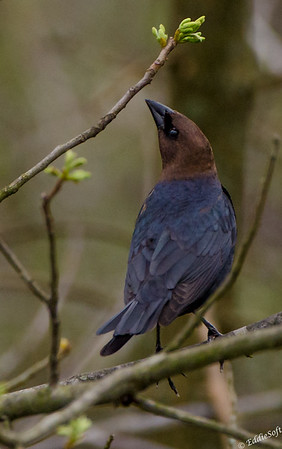 You are probably already aware this is a male Brown-Headed Cowbird as they are abundant across the entire continental States and then down into Central America. I do always like to give a shout out to the individual(s) responsible for naming birds when they choose a moniker that can be visually seen in the field – kudos to whoever named this one as they pretty much nailed it with the head. Now the cow part needs some work (due to their pension for hanging out around Cows who stir up insects and such). Maybe I’ll put in a petition to have it renamed the Brown-Headed Asshat. I may need some help with petition signatures so look for an upcoming request! As you can tell, the male is fairly dark in its feathering pairing up the brown with an overall black body. In direct light I’ve found the black feathering will take on a sheen that looks kind of like a dark teal – think almost like this bird’s other family member the Grackle. 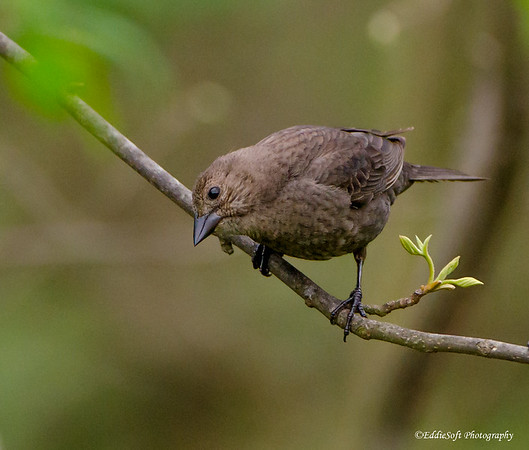 The female on the other hand is all brown with a bit of darker streaking. Like the male, this bill is conical shaped, black and thick. They also possess a coal black eye that reflects the darkness of their souls, the evil that resonates through every feather on their body. Just look at this one, smug and ominous, looking for unsuspecting females to unleash their demonic behavior on. 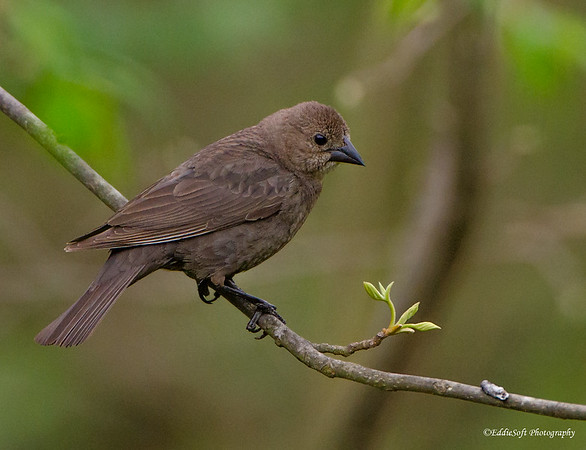 There she spies her target. A young innocent female bird looking to start a family. She has labored for weeks to make the perfect nest to provide protection for her newborn, painted the nursery to comfort the little ones and bring joy as they awake each day to their mother’s nurturing. Soon they will be old enough to play in the trees, hoping from perch to perch trying to mimic their parents in pursuit of sustenance. But NOOOOoooo, this demon has other plans – plans that will have a long lasting impact on her victims. 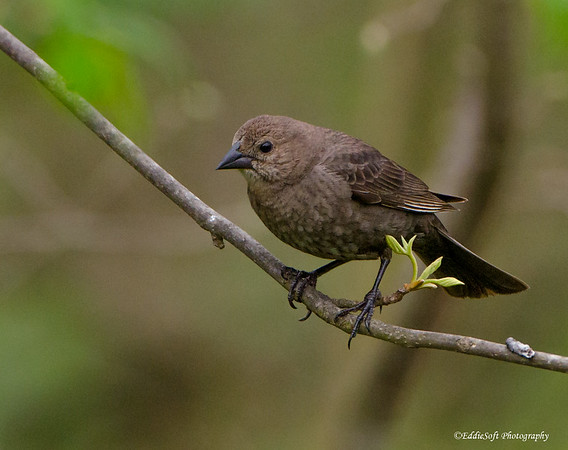 Perhaps I am too harsh, perhaps I just don’t understand the nuances of this bird’s life … nah, plain and simple, the Cowbird is a complete ass. Maybe you are not aware of one of the key aspects of this female. She’s what they call a brood parasite. Too damn lazy to build a nest of her own, nope, she seeks out other nests, distracts the occupants and lays her own eggs alongside the others. Then she takes off to leave the unsuspecting mother to raise her foreign offspring. Often too caring for her own good, the mother will try to raise the baby Cowbird as her own. Depending on the relative sizes of the species, she could be left exhausted trying to feed the larger mouths – potentially at the expense of her own natural family. I have several pictures of a small House Finch trying desperately to feed a gigantic young Cowbird. If that isn’t enough to hate this bird, then maybe the fact that some of these young Cowbirds will simply kick the small babies out of the nest. 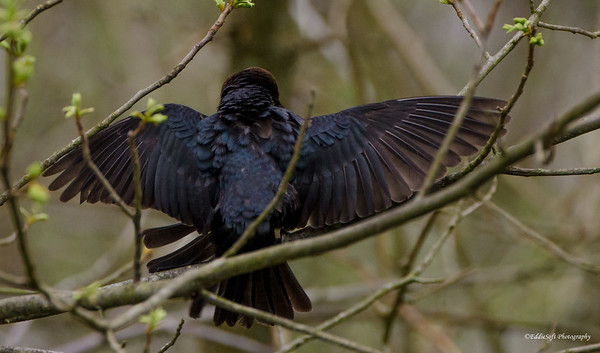 Where’s the real mother, the one that so callously left her own babies to be raised by another mother – well, she’s down at the local tavern looking for a good time – for the record, Cornell states they can lay more than 3 dozen eggs a year.

A gloomy bird for a gloomy day. Take it easy folks and be sure and sign my petition when I get it put together.