Greetings everyone! Been wrapped up in the chaos we call Christmas and have not had time to really sit down and relax in the warm glow of the computer monitors. Clearly the financial engine is booming in America as trips to the stores to pick up items to celebrate the now over-commercialized event meant spending three times as long in a checkout line than it took to actually find that perfect gift. Every store – same story. I do try to support the local independents – the problem is my time is becoming increasingly valuable to me. Quite revealing as the mainstream media and self-serving politicians tried their hardest to paint a false recession narrative just a few months back. In honor of this soaring economy, I bring you royalty (well, at least I’m pretty sure about that). 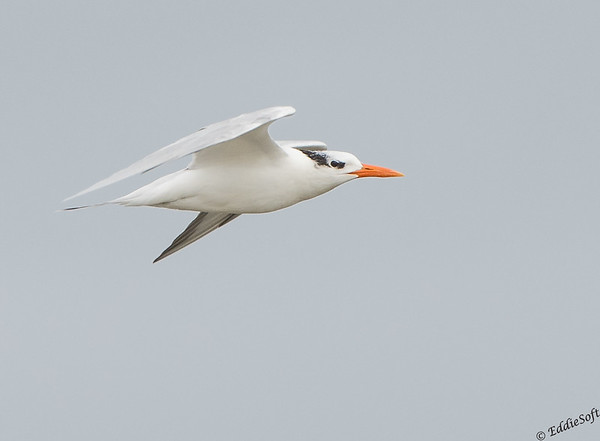 I have not featured a lot of Terns here and not for lack of images. On the contrary, my photo queue is full to the brim with these sharp looking birds. They happen to be a family of birds that hang out at my favorite local wildlife refuge in Havana (Emiquon) as well as easy fodder on our multiple trips down the Texas Gulf Coast. If you have access to a fairly decent sized body of water, then you have a good chance of being able to witness these aerial acrobats in action. The difficulty is not getting them classified in the right family as their slim/aerodynamic profile and dagger sharp bills tend to quickly differentiate them from the abundance of Gulls sure to be in the same area. No, the difficulty comes into getting them categorized in the right species as there are at least eleven I can name off the top of my head that are available somewhere in North America. Granted not as hard as ID’ing one of the twenty or so Gull varieties, but they do have a similar issue in that their coloring doesn’t differ that much – especially out of the breeding season. 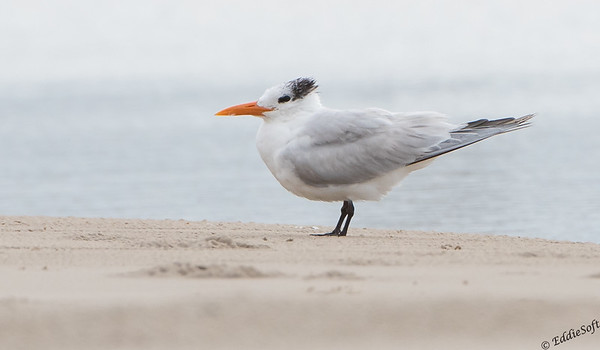 Hit the jump to learn more about this sleek looking bird.

As a result, I usually find myself creating a folder and loading it up with all the Terns I come across in the digital darkroom. That way, when I find myself with some unexpected free time I can simply navigate to the folder and challenge myself to get a few narrowed downed at a time. Once they are whittled down to one or two options, I call in the big guns and ask my brother Ron to weigh in. He has greater attention to detail and able to spot nuances I often miss. Also explaining my reasoning for putting it in a particular group helps my own confidence while reinforcing my internal decision framework. 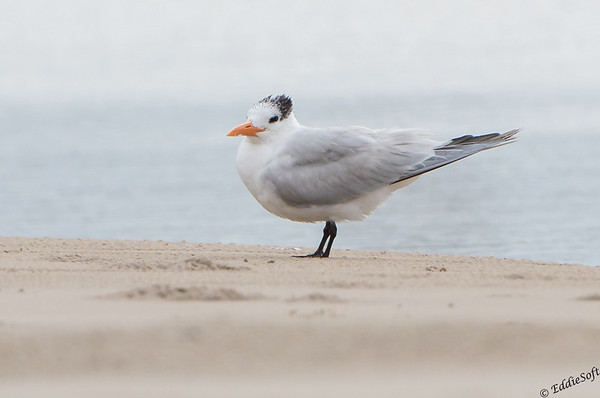 Unfortunately, Ron has been extremely busy as of late so trying to give him space to deal with the balls he is currently juggling – trust me, I am keenly aware of how much time it takes to dig in and try to distinguish birds that come from a family with similar looking features – contrast that with those birds that sport unique profiles such as the Pileated Woodpecker (link here). Now, some of the Terns do have a unique characteristic that is a tremendous help. Take for example the Black Tern (link here) that sticks out like a sore thumb. The Tern featured here appears to have a similar easily differentiated feature – specifically the ragged crest adorning the back of the head. Typically, this crest is held flat against the back of the head and thus not as easily spotted, however, the one on this specimen would appear whenever it turned its back on the wind. 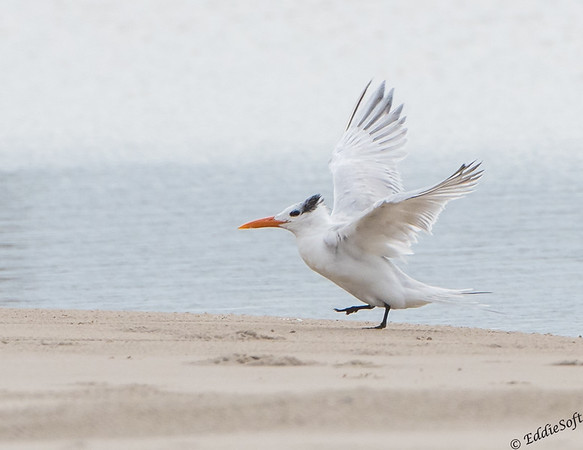 Combining that feature with the solid and fairly bright orange menacing looking bill with rather short black legs and black/darkish lined tips on the underwing leads me to the classification of a Royal Tern. One feature I was not able to get clear in the photographs was the long forked tail – the flight shots that made it into the tin were horizontal making it very difficult to discern the fork. The shots that sandwich this paragraph probably give the best angle on how extended those feathers are. Mental note, next time in the field try to get a better angle that shows this particular feature. Suspect this is the first thing Ron is going to ask for a better view of – will have to check the darkroom floor for some discards that might show the required perspective even though the photographic execution was crap. 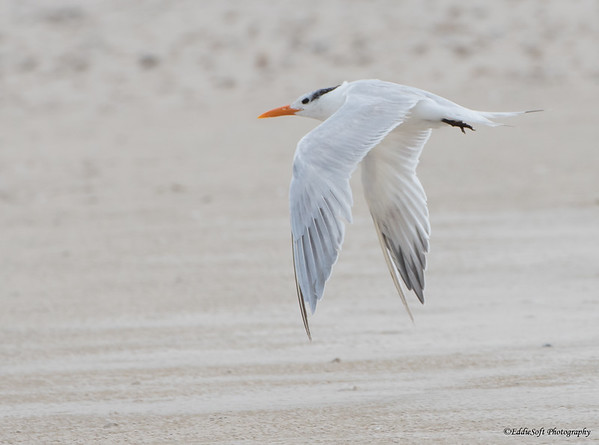 This particular specimen was shot at Galveston Island, Texas back on December 2017 – good lord, just realized the calendar year is about to change bringing a mental image of Snoopy running from a horde of falling years (mentally replace the brown leaves with calendar pages). The Royals are coastal birds with minimal migration. They jump up to the New England coastline for breeding and migration, however, they spend most of their days enjoying the beaches of the southern coastlines (Carolinas, through the Gulf Coast and then down and back up the Central America through Baja. Breeding adults will sport the black cap common to many Terns, where the nonbreeding variety will show the markings depicted in this series. 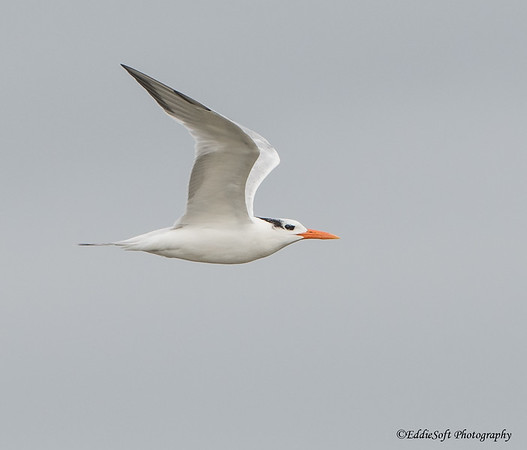 Watching these nimble flyers is pure joy. When they are just hanging out and enjoying the sunshine they’ll open the wings and effortlessly float along. When the day turns from fun to hunt, the wings shift into purpose mode as they lower ~25 feet above the water’s surface looking for small fish or crustaceans. When they catch sight of their prey, they turn on a dime and pierce the water catching their prey in their strong bill and take to the sky once again. Cornell points out these Terns will often swallow their prey in flight – now that is what I call a fast food run. 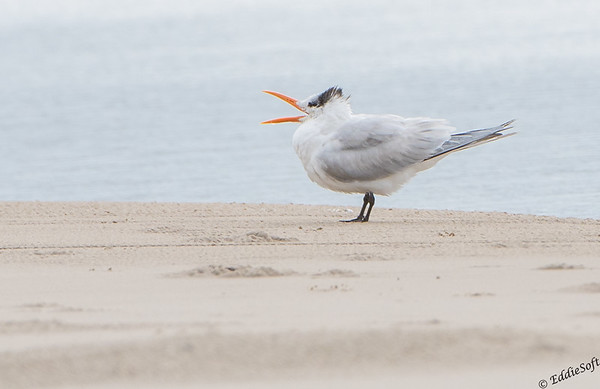 If Ron should happen to challenge this ID, I’ll definitely update everyone – like I said I doubt it as this is one of the Terns with fairly distinguishable characteristics when combined with other identifiers such as leg color, bill color, bill shape and wing feathering help narrow down the options very quickly. As always, any other opinions provided in the comments section is greatly appreciated.

Until we talk again, stay safe during the holiday season – and sure as hell, don’t risk life and limb by accidentally putting yourself between a screaming horde of crazy-eyed soccer moms and a display of Barbie Dreamplane Playsets – the horror, the horror.

4 thoughts on “As the Royal Terns”