Here I sit wondering. was it having to load and then unload 20 bags of cement, or shoveling 30 5 gallon buckets of coal shale, or hand carrying said buckets some distance away, or moving a bunch of 4x8x3/4 treated plywood, or loading and unloading cement pavers, or having to haul 16 large tubs full of Halloween decorations back onto the tall shelving in my outbuilding, or complying with Linda’s demand to take out the trash that has resulted in destroying my lower back? Finally gave in to the nagging pain and had my chiro snap it back in place. Now just need to get the swelling down before another weekend’s worth of work stares me in the face. The good news is, right now, sitting doesn’t hurt as bad as standing which makes getting a post out one of the few things I can get done during the healing process. Oh, for the record – I am certain it was the trash duties that did this to me!

Took a gander at the photo queue and found a series featuring these beauties. 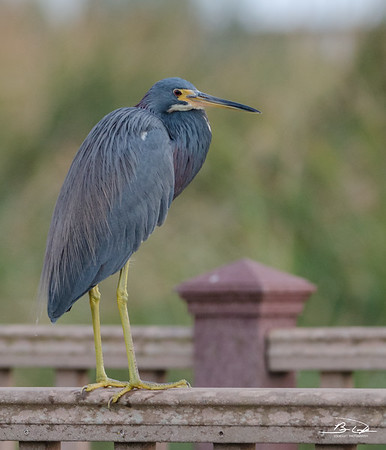 When it comes to Herons, the Great Blue holds command from a sheer size perspective, but when it comes to elegance, I think the Tricolored variety takes the cake…or maybe in this context, the fish. Something about the slate blue/grey interlaced with lavender and then contrasted with the white on the belly give this smaller Heron a regal look. An image that stands in contrast to the wet and muddy environments they tend to hang out in. 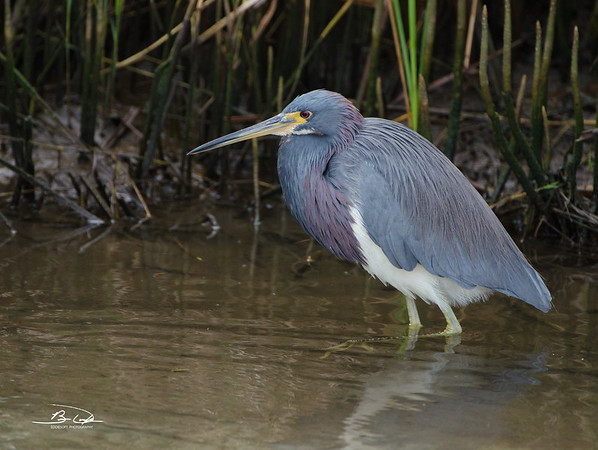 Hit the jump to learn a bit more about Mr. Tri.

This series of Tricolors come from our December 2016 birding trip to the birder paradise called the Texas Gulf Coast. If you are fond of the Tricolored, then that is the perfect place to be as they are in abundance along the entirety of the Gulf area. Did a quick check on their region maps out of curiosity on their overall range. They are definitely southern coastline centric from Florida, down and around Central America on up to southern California. 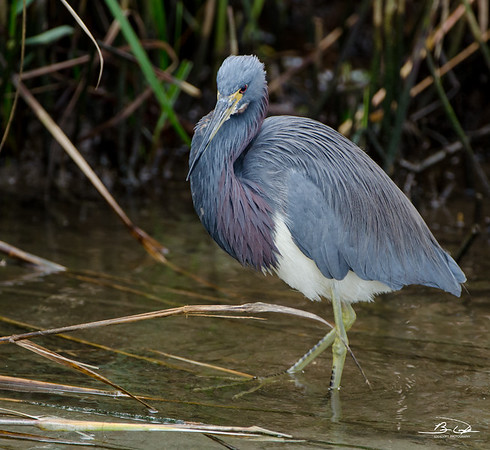 Their relatives the Little Blue Heron’s (link here) region has a similar breadth but willing to travel to up into the Midwest during breeding season. Guessing it is the romantic lure of the corn fields. The Great Blues (link here) are far more adventures and claim pretty much the entirely of the US as their stomping grounds (although apparently the Rocky Mountains are too high of a climb). 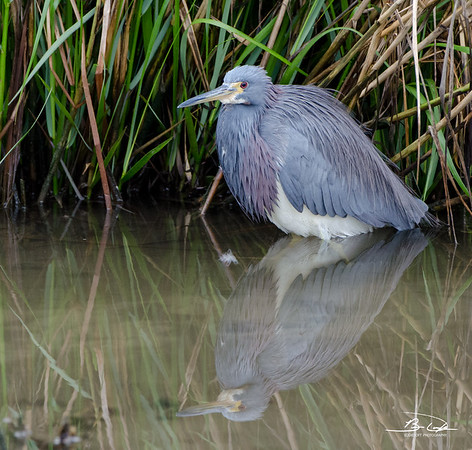 This particular specimen was found at the South Padre Island Bird Viewing and Nature Center. It was hanging out fairly hidden from most of the visitors who kept to the main path along the raised boardwalk. There is a small boardwalk offshoot from the main run that takes you back behind some rather tall reeds. Towards the end of that walk reveals and opening where you can usually get your glass on some good subjects. Apparently this Tri prefers this more private setting – no children to scare the small fish that make up the majority of their diet. Note, I really liked the full body reflection the still water produced in the shot above.

With the full reflection in the tin, decided to push in a bit to give a bit more detail on the bird. As the glass closed in on the Tri it occurred to me there is a downside to the private hunting grounds. The more company you have the more choices your predators have. These marsh waters are home to some mighty impressive Alligators (link here). At least with a few more victims.. I mean “friends” around there is a greater chance that one of them will sound the alarm in time for chance to flee. A Gator checking out this part of the center will have one target in its sights. Before I leave this setting, note how low this specimen is to the top of the water. While researching this bird on Cornell’s website, learned that the Tri will pull in their neck and lower themselves to the water before making their strike. Consider that bit of background confirmed! 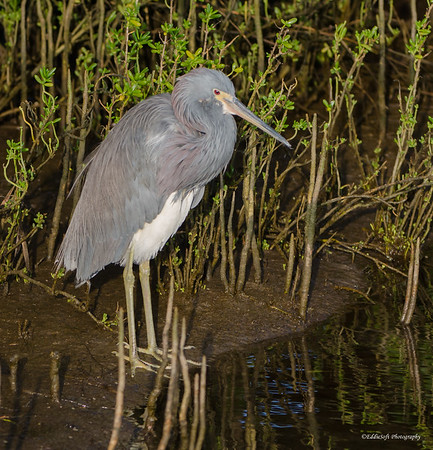 Found this specimen (believe it to be a different one) later in the day as the sun was starting to drop. Found it interesting that it was hunting the water from the bank. Most of the time I have seen this bird on the prowl it has been leg deep in the water. Tried looking up if this was an anomaly or if they do like to mimic their big brother the Great Blue. No luck on getting an answer to that, but did learn the Tri is supposedly similar to the Reddish Egret when it comes to stalking practices – very active, lots of dancing and coaxing to stir up prey. They even claim they put their wings over their heads similar to the Reddish to trick fish into wandering into the shadows. I have shots of the Reddish doing this (again, link here), however, never witnessed the Tri being this hyper.

The specimen above was found at Laguna Atascosa National Wildlife Refuge. As mentioned, the Tri doesn’t have the size of the Great’s, but they are still a tall bird compared to the rest of the peeps that spend their time in the shallow waters. There are two key indicators when trying to identify the Tricolored in the field. Both fairly easy to see as long as you can get a view from the side or front. The first is probably the easiest to distinguish. This species possesses a white belly. Spot that on a dark morph Heron/Egret and you are good to go. A second indicator can be more hidden at times. In fact, it is difficult to tell in the Padre shots above. They tend to have a whitish stripe down the front of the neck. You can see its outline in the shot directly above.

While checking out Galveston Island, spotted this specimen in a small pond just off the road. It threw me at first as I saw the rusty neck and immediately thought it was a Reddish Egret. Didn’t really take note of the white belly (my bad) which would have pointed out my error immediately.

Discovered my error in the digital darkroom, but was still confused about the lack of the blue/grey slate and absence of the lavender. Eventually figured out that this was a juvenile. A nice add for my reference gallery. Unfortunately, that was the best shot I was able to tin on that encounter. The shot below gives a better look at the white strip on the neck and the now very apparent white belly … now if I could have just seen that stupid reed in the way I could have had a decent shot (bad Bri) 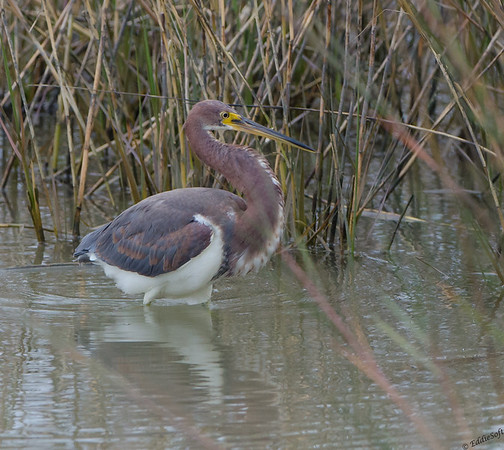 Probably should wrap this post up – had a lot of pictures that allowed me ramble on. Hope you enjoyed learning about my favorite Heron.

3 thoughts on “Well, Hi There Tri”