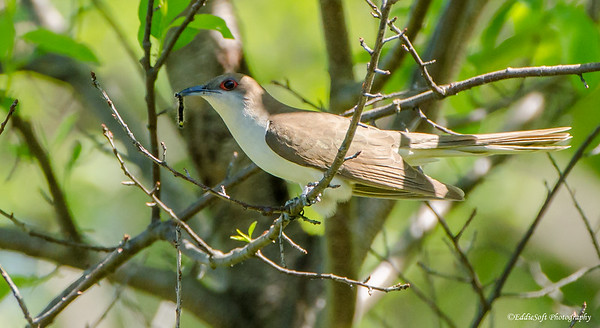 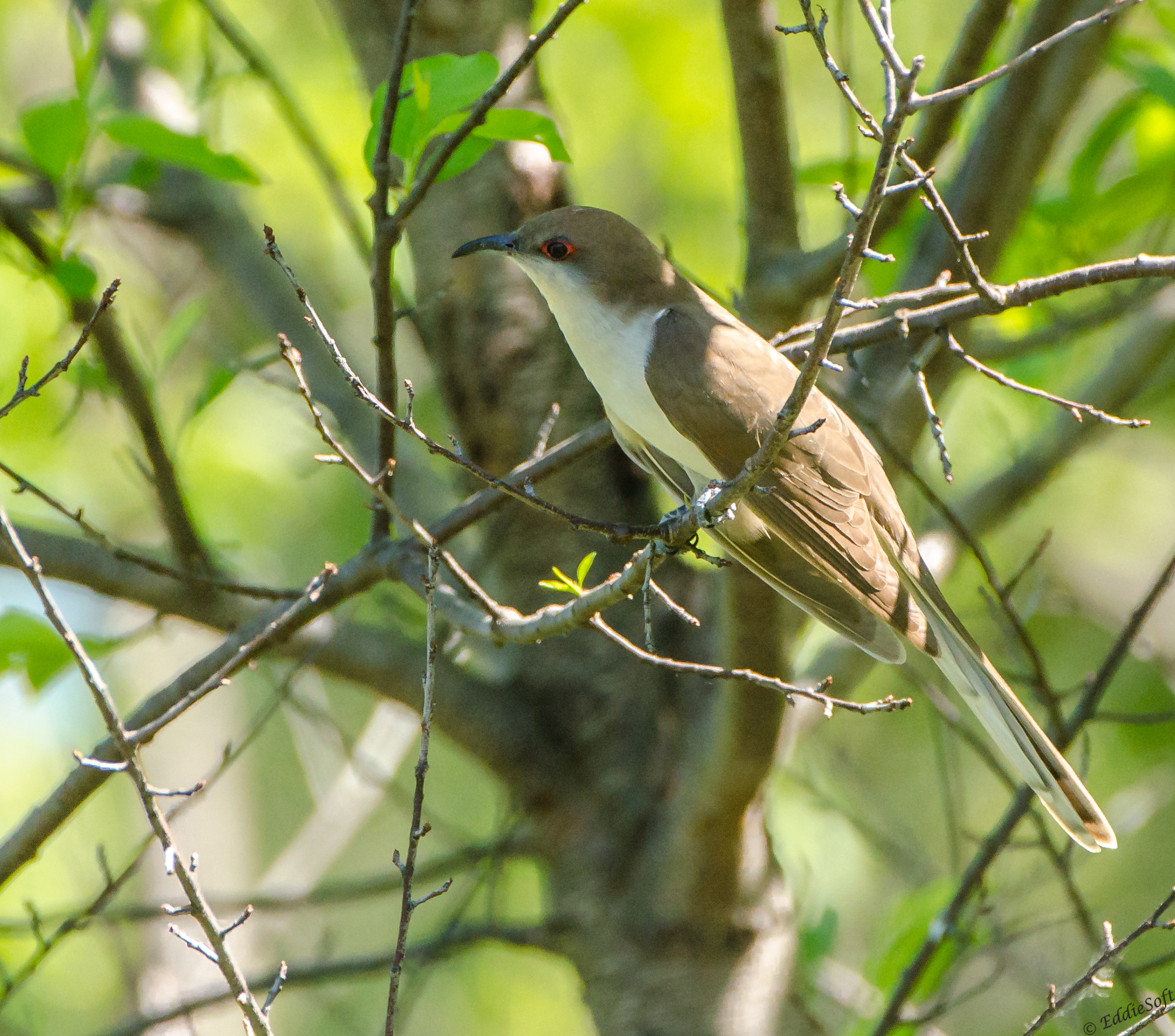 That was it for the new birds on that visit. Birding was still good that day. Like last post, simply going to give a rundown of the interesting encounters. Next up, the Eastern Kingbird. I’ve featured the Western variety a number of times due to their rareness in the Midwest (link here and here). What we do have is a lot of the Eastern variety. This particular one was hanging out at the top of the tree canopy singing its lungs out.

Next up the more elusive of the Orioles. In the breeding season you are likely to see a Baltimore Oriole on any birding excursion. Their bright orange plumage is easy to spot against the lush greens. The duller coloring of the Orchard Oriole is a little harder to detect and thus may be one of the reasons they often go unchecked in the field. Note, they do have a similar breeding region to the Baltimore.

The next bird falls into that class of subjects that rarely get correctly identified in the field. When it comes to little brown jobbers, determining the exact species without being able to study the nuances is nearly impossible – if it is a juvi, then start hunting for companions that might be a bit older or you are in for some long nights with the nose in reference books. Sometimes you get lucking and their song will give them away (if they are willing to share in your presence). This Sparrow chose not sing for us and thus had to enlist the aid of Ron to help identify it after processing in the digital darkroom.

Per Ron, ” The white eyeing, chestnut crown, round head, long tail, whitish throat with chestnut side tinges, buff breast, two weak wing stripes and pink conical bill are distinctive”. That description puts it in the Field Sparrow category. Their song is easily identified in the field – simply listen for the sound of a ping pong ball being dropped on a table. Until looking at these latest shots I didn’t realize how much chestnut they really have in their feathers – something to tuck away for maybe a better ID in the field. 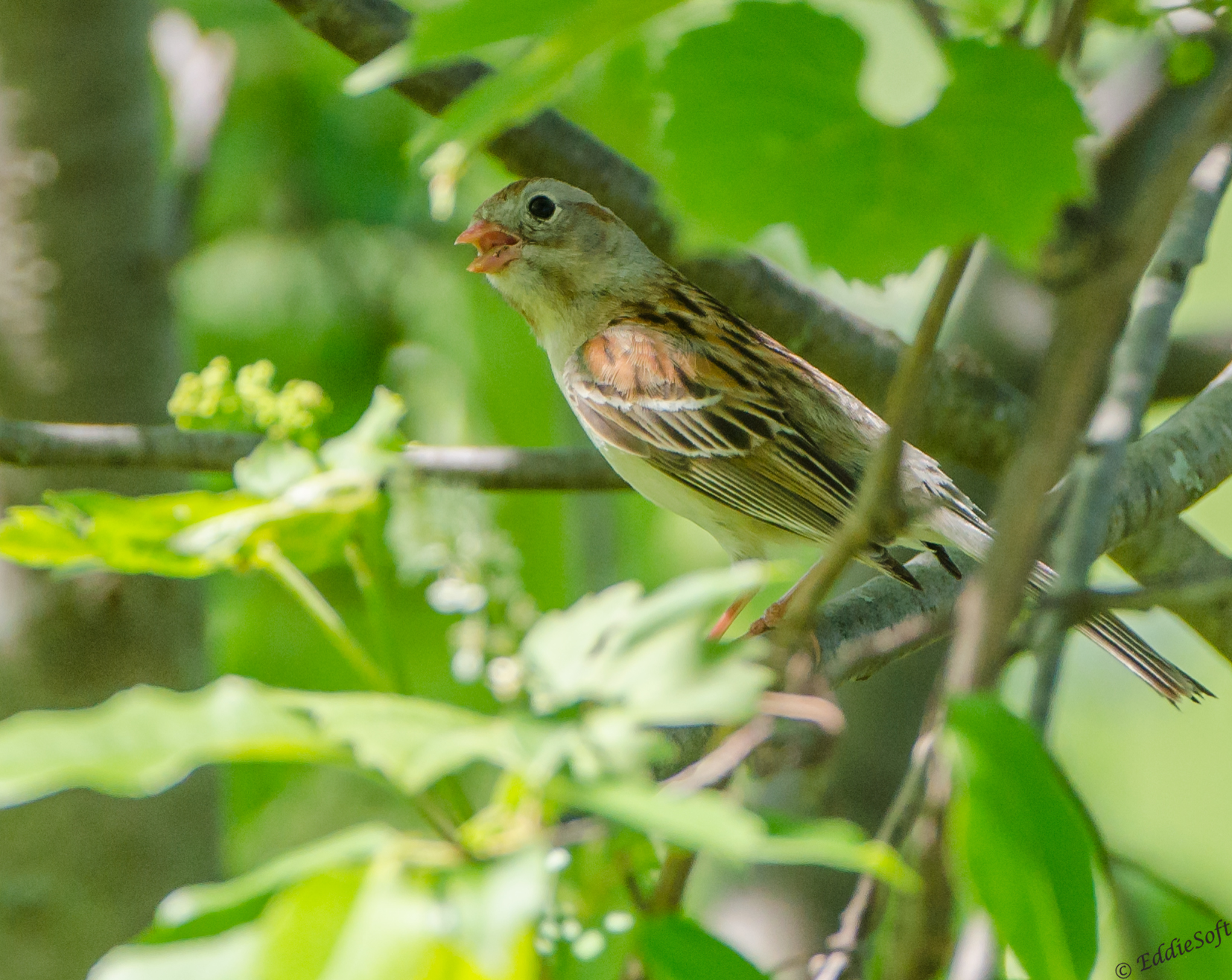 Next in line, another bird with a red eye – unfortunately, these pictures do not really show it as well as the Cuckoo shots above. This one was hanging out on the right side of the main loop trail intent on tracking down some food. I wasted a lot of digital storage trying to get a decent picture in the tin. The canopy was killing the light and forcing the ISO up. Usually not a problem, but this Red-Eyed Vireo had two bowls of Sugar Pops in the morning and wouldn’t sit still. 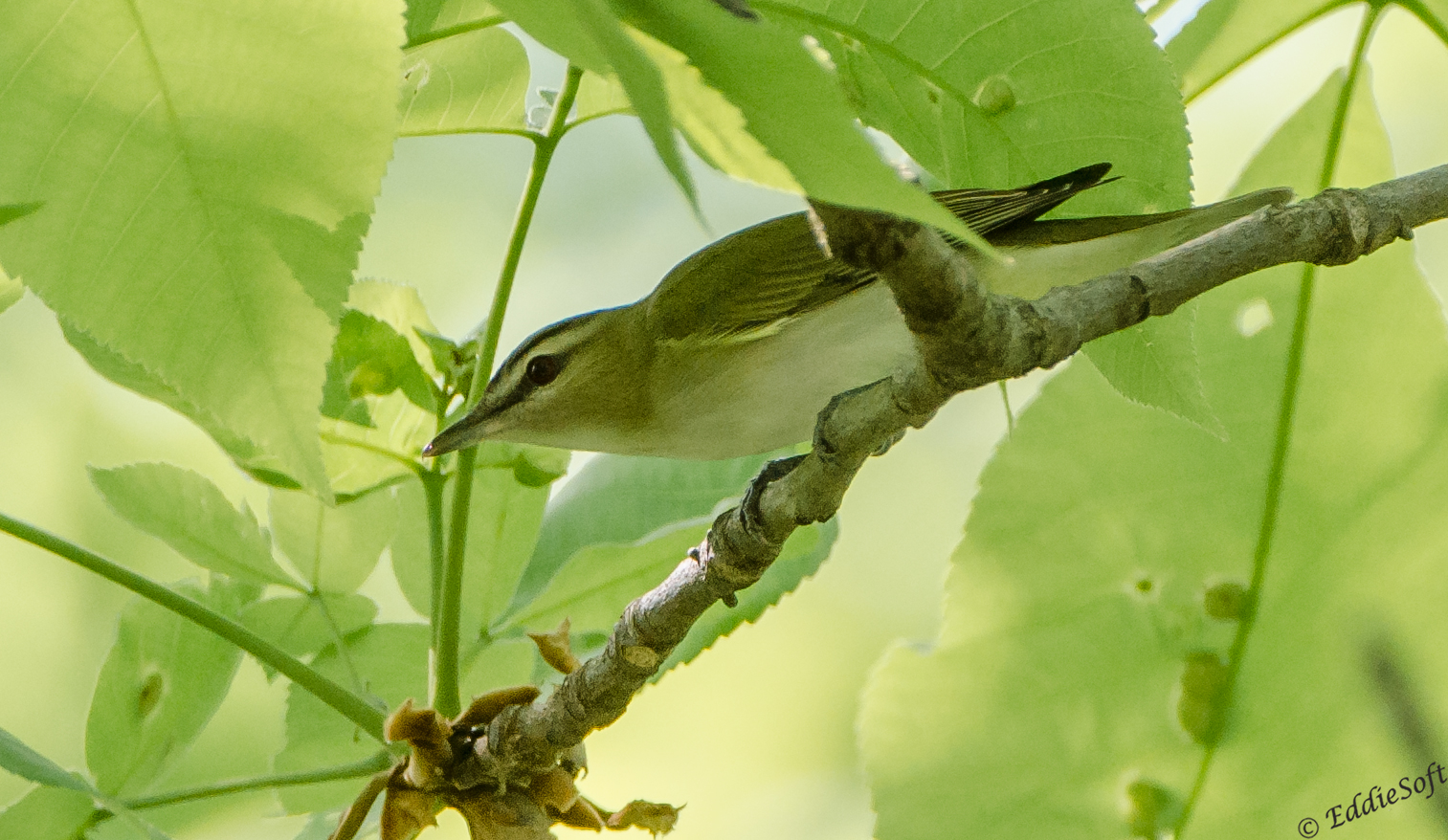 You can see a hint of the red in the eye in the following shot. Had to drive the exposure up enough to get that view. It is possible this is a juvi – their eyes do not get their red tint until entering adulthood. The reference books do mention this feature is hard to detect from afar – might want to add it can be tough seeing it when trying to photograph an ultra hyper specimen.

The angles above did not reveal one of their key features – if granted the proper view, you will see a small hook on the end of their bill. This is handy when trying to distinguish the Red-Eyed Vireo from the similar colored Warbler Vireo. Our subject also had its crown up which I rarely get to experience in the field. 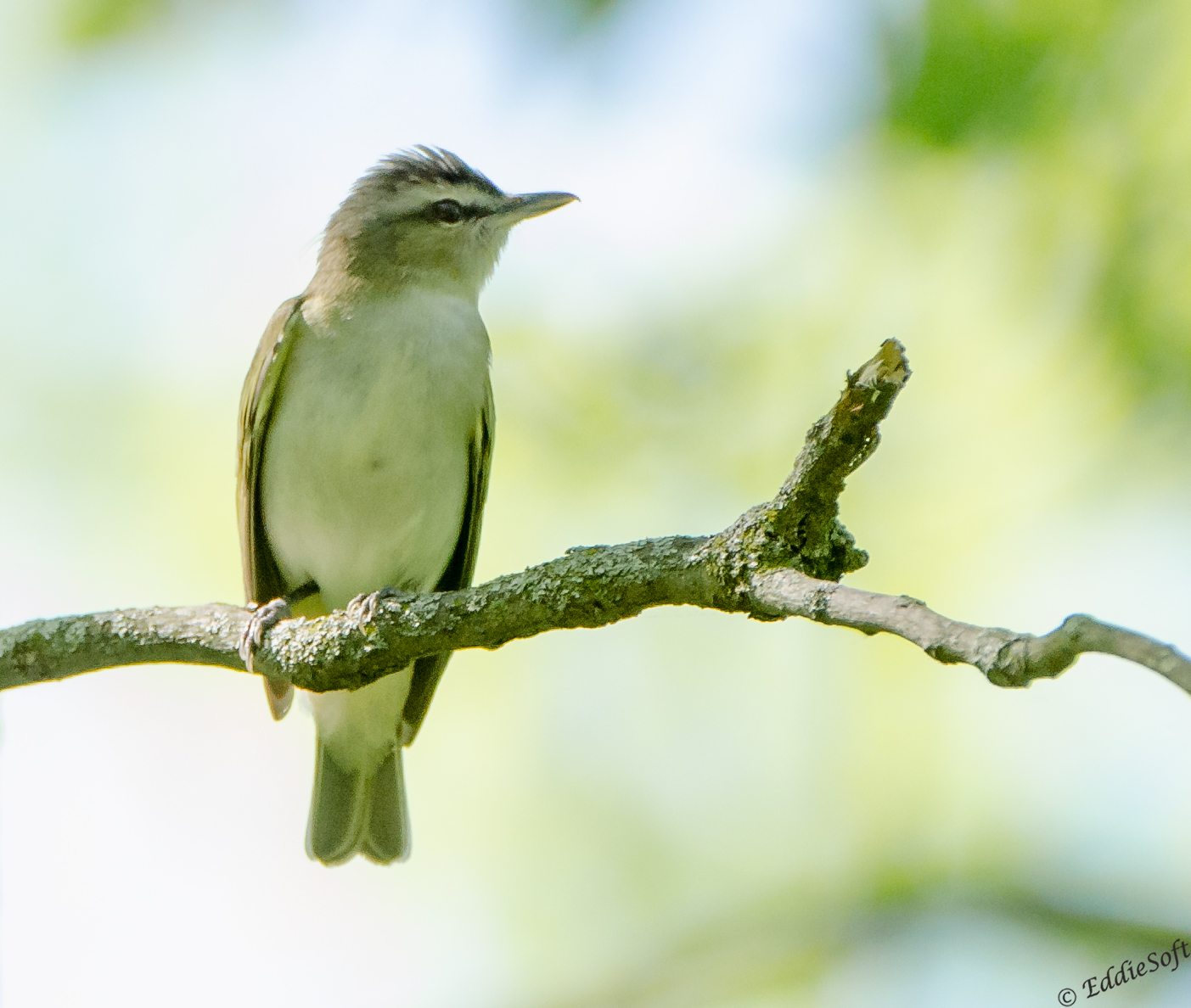 Thanks to a foreground leaf that went unnoticed due to the big glass piercing through it, this additional shot suffered some discoloration on the tail. I just thought the pose from the branch up was really cute … and shots with birds without tails tend to look weird. 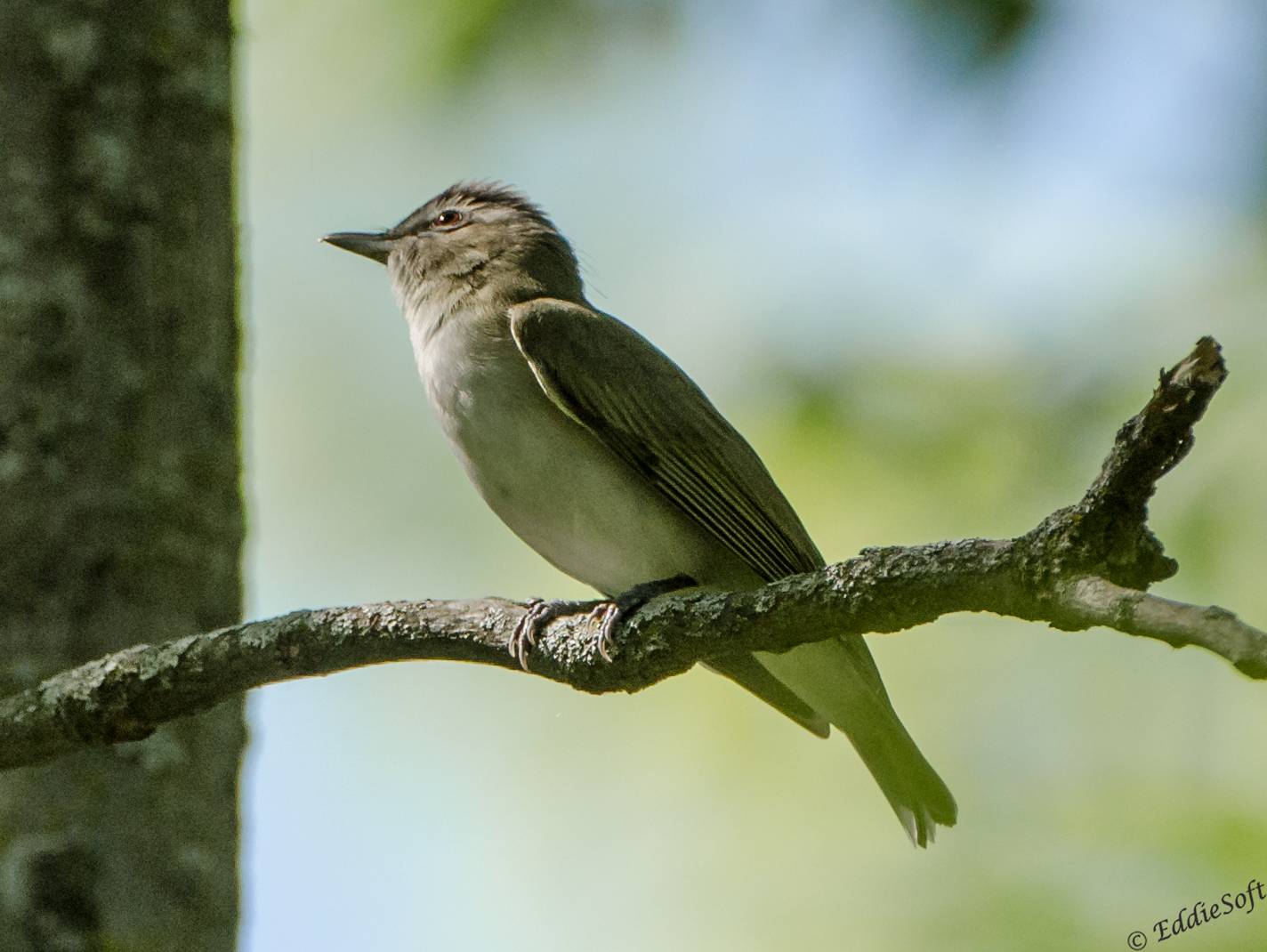 Like the Viero above, this Great Crested Flycatcher was not playing friendly with the camera. Not the best shot for sure, but this one does show the key features you look for in the field. The crown is distinctive when it is up where the yellow breast topped with the gray neck is easily seen (as long as you are to seeing it from the front, otherwise you will need to look for the less distinctive rusty primaries). They too possess a hook like the Vireo. You might be curious about the eyelines.

Those are not real markings, rather shadows from the nearby twigs. Pretty cool effect nonetheless. Including the remaining shots just to complete the bird checks for the day. These pictures do not do the bird’s justice compared to how brilliant they look in the field – my apologies for the poor execution. Friend to the blog Brian over at Butterflies to Dragsters recently introduced me to the Eurasian variety – which I happen to now like more than our American Goldfinch variety pictured below. Maybe just a case of familiarity since these bright yellow spots are extremely common in our parts where I have obviously never had the chance to seen the Eurasian version. 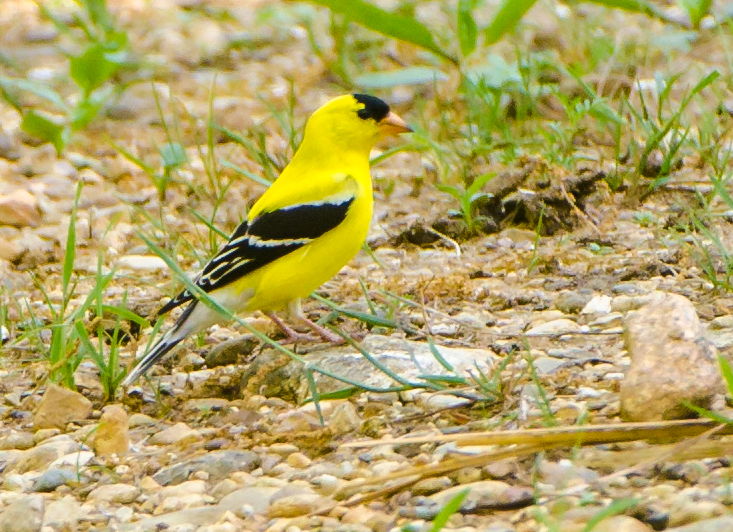 The Scarlet Tanager is a special find in the field. Again primarily an eastern US bird, however, they are very elusive even with their brightly colored markings. One of those birds I am always looking for and 99% of the time come up empty. This one flew by and landed on a nearby tree while we were taking pictures of the Vireo. Attention immediately diverted to the Scarlet. Now that we had found it, the problem was getting it in the tin. The spot it landed in was on the other side of the trail which was significantly denser and the light was a premium. Had to grain up to get something in the tin.

One gorgeous bird (one poor picture ha). Although even poorer execution, adding this in just to give you a feel for how the Scarlet comes down the back to the tail feathers.

“Hey, you stop looking at my ass!” Seems like a fitting image to end this two part post on our Gander Mountain excursion. Hope you enjoyed seeing all checks for the day. Also a good reminder to Ron and I how good the birding can be there in stark contrast to how BAD it was last weekend – we did see a Yellow-Billed Cuckoo a few minutes into that recent visit – absolutely nothing after that beyond hordes of mosquitoes and 7′ weeds engulfing the trails. Take it easy everyone, I need to get back to my Halloween decorations.