Other than a likely case of hopefully temporary ear damage we successfully made it through the first night of bands at the Mississippi Valley State Fair beer tents.  As mentioned last post we are playing groupie this weekend and checking out some new local bands and of course our long time favorite Love Dogs who will be taking the stage later tonight.  Just as a quick summary and to add to my memory banks when I’m old(er) and wondering where the hell all those years went – the Sugar Nipples ended up being a band with a “named” band than they turned out to be.  We have visions of them being similar to our favorite Vegas band Steel Panther but they fell short.  The capper was when they started repeating songs to fill the gap before the AC/DC tribute band Electric Shock came on.  Luckily shock ended up being really really good … if you like AC/DC classic sets.  One of my biggest accomplishments in life was converting Linda from country to real music.  We have traveled to several AC/DC concerts and our bar was set extremely high of someone wanting to monetize off their name.  Beyond some lead riff mistakes, Shock pulled off an excellent job.  The lead singer had the vocals down and imagine a 5’2″ Angus complete with school boy outfit shredding away the night for 2 hrs.  Oh, and he was from Australia and had devoted most of his life to exactly reproducing the abilities and styles of his mate from the home country.  Would recommend warming up a bit before tackling a song that starts out with such a hard solo – he eventually settled in or the alcohol compensated as the night progressed.  Can’t wait until tonight, and guessing you can’t wait to get to the meat of this post! 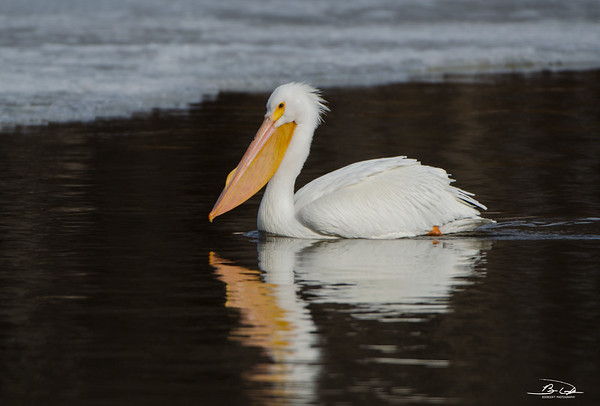 Yes, once again featuring a bird from the backlog.  This one is slightly different though – the last one came to you courtesy of 2015 where this one, with a sigh, comes to you from the wayback machine of February 2014.  Wait a minute, “where the hell did all those years go”.   Noting how much grief my brother Ron gave me for being 2 years behind, can’t wait for the comments when he sees I am 4 years in lag. 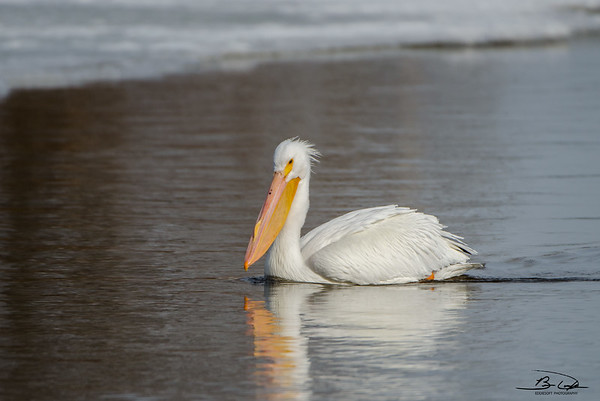 Hit the jump to see and read more about these bundles of white feathers!

Thought it was fitting to go with today’s post because we are in Davenport IA and these shots were also taken here.  Today we are in the midst of our summer season bringing with it the customary heat.  Pretty sure I was complaining how ridiculously cold it was in the middle of February.  Feel free to take issue with my weather complaining see as how we have chosen to live in an area that experiences all 4 seasons.

In case you haven’t experienced these birds and thereby likely never been to a body of water west of Indiana and north of Florida.  Other than that, you should have seen these massive birds enjoying a lazy float on the river.  They also happen to be a bird photographer’s dream bird.  Much like the Great Blue Heron, these birds move slowly both in the water and in the air.  If you have trouble getting these into the tin, you should probably consider taking up painting instead. 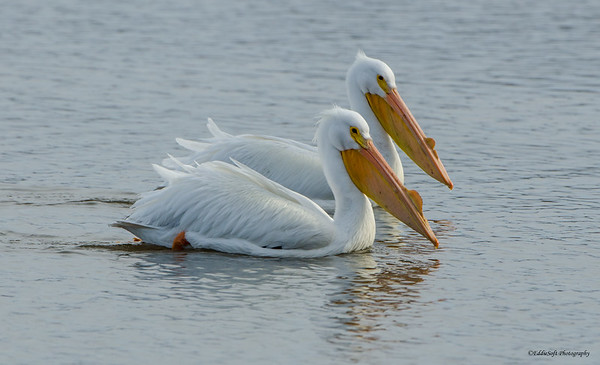 You might be curious about that large knob on the top of their bills.  Both females and males sport this feature.  That is an indication it is breeding season with this birds.  For the rest of the year, this feature is absent.  This also means I can officially tell you that Cornell’s birding website is slightly off in their breeding region designation.  They need to extend their coloring down into eastern Iowa.   There is another characteristic they tend to hide while on the water. 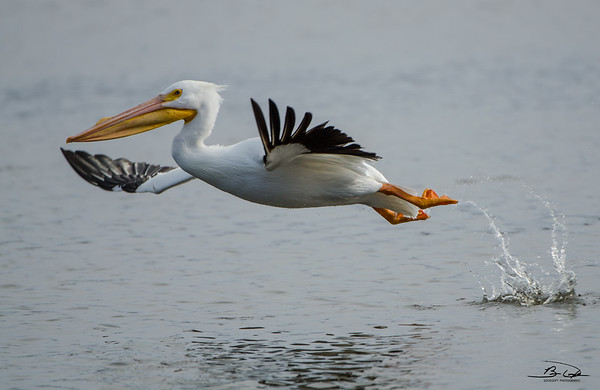 Their wings are dipped in black.  It is pretty obvious when they are in flight, but a lot of people have asked me to identify their soaring flocks only to be surprised when it is a bird they are already familiar with.  Guessing part of the problem is the cool effect they produce when they are soaring.  Typically they mass in large groups and tend to fly in V patterns very similar to the Canada Goose.  Their synchronized flight causes almost a blinking effect as they change angles that amplify the blacks and then the whites of the wings.  As soon as I spot that shimmer it’s an official ID regardless of how far away they happen to be.   Here is a close up of those dipped tips. 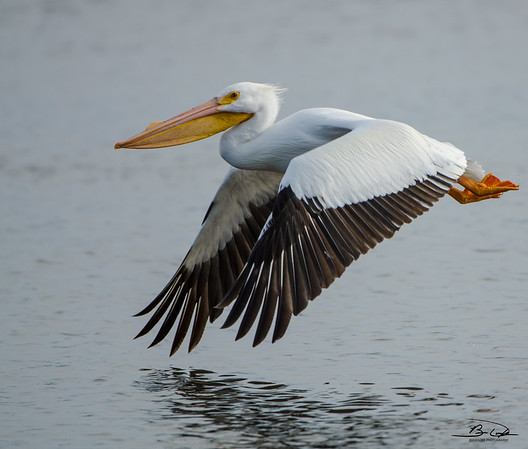 Chuckled at myself when this shot formed in the viewer.  Would have been nice to have a few seconds to push the f-stop up (or down depending on your level of photography knowledge) to give me a bit more clarity on the back bird.  Regardless, still think it is an interesting shot even if it is a play on perspectives. 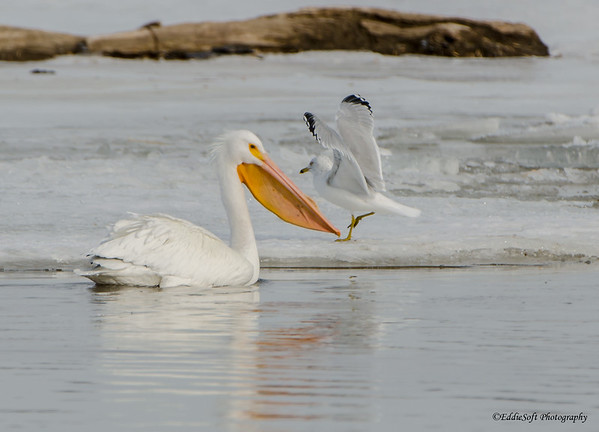 Unlike the aerial bombers the Brown Pelicans, the White Pelicans are more subtle in their eating rituals.  The Browns take to the skies and then fold their wings back as they crash straight into the water to scoop up an unsuspecting fish.  Although similarly equipped, the White Pelican simply float around and scoop up fish in their submerged pouch like a giant fishing net. 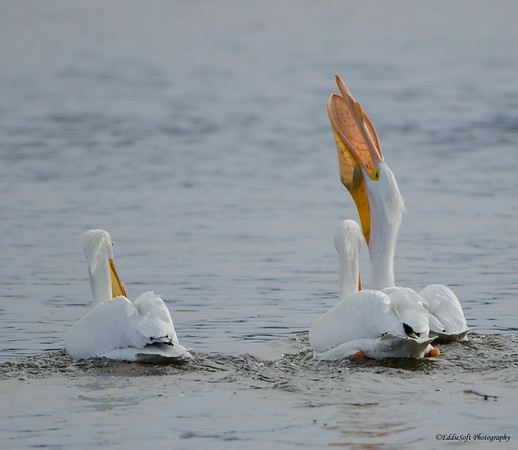 Once the victim has been snagged, they’ll raise their pouch vertical and force the fish down their throats.  This brings new meaning to “down the hatch”.  According to Cornell, groups of White Pelicans will work together and push fish towards the shore where they can be collect easily.  I will have to take Cornell’s word on this – I have never seen this in the field and actually more accustomed to them attacking each other trying to steal food from each other.  As evidence, these two were scheming for a takedown.

Their devious intentions were foiled! 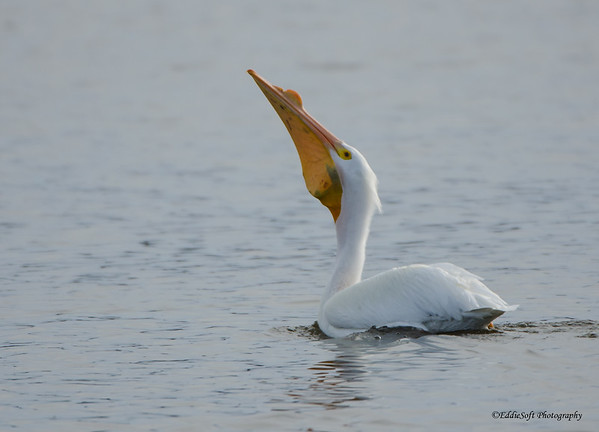 This post is going a bit long – let’s get to some parting facts and get you on your way.  The White Pelican females typically lay 2 eggs at a time, but only one will survive thanks to siblicide.  Basically a Hunger Games in the small confines of the nest – a terrifying concept for me being the youngest by far in my family.  For those that survive, they will leave their nests around 3 weeks old and form into a large group referred to as crèches. The parents will continue to forage their particular offspring – pretty much the birding equivalent of daycare. 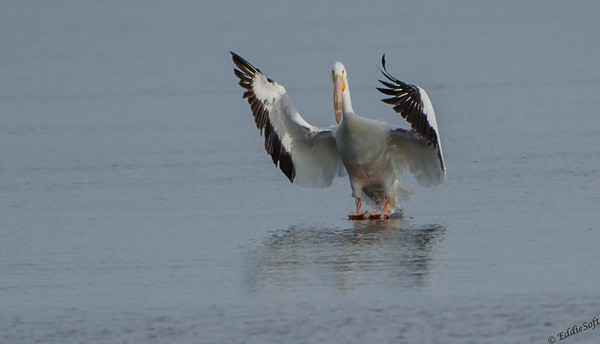 Hope you enjoyed seeing and reading about one of North America’s largest birds.  I actually have another set of Pelican pictures ready to go, but I’ll hold off on those for awhile – especially with my backlog!

Time to get ready for the Love Dogs – Rock On!

3 thoughts on “Days in White Feathers”