Well, my fellow blogger friends are putting me to shame with their output compared to my weak production as of late.  So much that I am writing this post from the car – anything to find a couple of hours to bang out a few thoughts.  We are heading up to my wife’s hometown in Iowa to see the Sugar Nipples.  Thought it was just saying that line that makes me chuckle, but turns out typing it is just as humorous ha.  Before you jump to any conclusions, that’s the name of a local band that will be playing tonight at their summer fair.  To be honest, we are primarily making the trip to see two other bands – an AC/DC tribute band and our favorite bar band the Love Dogs.  Someday the realization will set in on just how old we are and we’ll have to give up these young follies – but not tonight!

The miles are flying past (Linda must be driving).  Better get to the headline of the post. 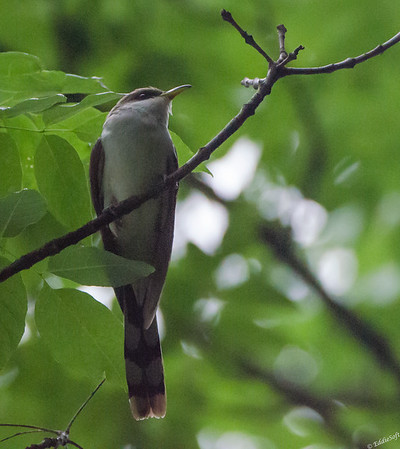 Hit the jump to read a bit more about this rather interesting bird!

That happens to be a Yellow-Billed Cuckoo.  This is not the first time it has made its appearance on the pages of Intrigued (link here).  That previous recollection was based on a sighting in my own woods – a completely accidental sighting for sure.  Not too long after that, I was able to locate one at Weldon Springs State Park in Clinton IL.  I remember immediately recognizing their unique sound thanks to that surprise encounter at home.  Unfortunately, the sound gave it away and not the visual.  It was ringing out from the middle of a densely leafed tree.  Probably wore a brown ring around that tree trying to get at least a glimpse of the specimen – thanks to Ron and I’s birding rules, you are NOT allowed to simply count a bird without physically seeing enough of it to confirm the ID.  It can be a partial as long as it has at least a distinctive feature or enough parts to properly earn a check.  This has definitely resulted in our relatively low number of lifers (I had to sheepishly reveal this fact while presenting at our local Audubon chapter – luckily they were gracious and didn’t laugh me off the stage).  after a good 30 minutes plus, the object of my hunt decided to reveal itself. 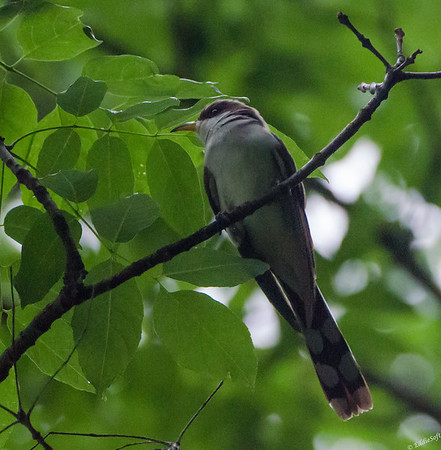 Sure enough, my recent education on the Yellow-Billed Cuckoo came in handy.  This Cuckoo decided that the effort circling the tree for that long warranted a whole 20 seconds of modeling before heading out for more private hunting grounds.  That was just enough time to confirm the necessary key traits to ID the bird (and yes, get the tick for the find for that day).  First is the underside of the tail.  The Yellow-Billed Cuckoo has a very distinctive pattern on it formed by what looks like 6 white blotches on the outer edges.  The other feature was important enough to put in the name of the bird – the yellow bill.  It is not completely yellow, but enough to properly classify it.  It should be noted that at this point in time, that would be two official sightings of the Cuckoo for me and ZERO sightings by my brother.  I did play nice and was able to locate him two other specimens while out on two future outings (Jubilee State Park and then back here at Weldon Springs).  He still owes me a Ross’ Goose for that!

Had to laugh at myself when I saw this next shot.  The pose it was making in an attempt to locate a juicy Caterpillar was the exact same pose I was giving in an attempt to see it.  Both of us probably had sore necks by the time this encounter was over. 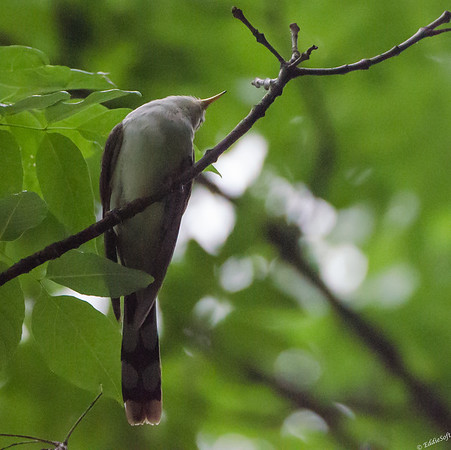 The brief experience didn’t result in very many shots in the tin.  Correction, it did leave a lot of shots in the tin, but only three were worth processing.  If you need to decorate a room with a multitude of blurred leave shots let me know.  I tell everyone that you have to stare at them really intently until the bird pops out like those old 3D pictures – per the immortal words of Lucas from the show Empire Records – “alway play with their minds”.  Talk about a tight post, start with going up to see a band and finish with a reference of a truly classic music movie.  “Damn the man, save the Empire!”  Crossing into Iowa, so time to wrap this up.  To leave you with some quick facts, this bird is one of the few that can eat hairy Caterpillars.  Reminiscent of the Nathan’s Hot Dog Championships, these Cuckoos are known to eat more than a hundred at a sitting – “just one more wafffffeeerrrr thin mint”.  Lastly, the cuckoo is known for barking back to the sound of thunder earning it the nickname the “Rain Crow” .

11 thoughts on “A Weldon Springs Cuckoo”