I hope everyone had a happy and safe holiday (for those of you that celebrate Thanksgiving that is – keep forgetting my readership spans the globe). Linda and I had a very nice T-Day dinner followed up with night and day activities feeding Black Friday frenzy – now even starting as early as Thursdays. Admittedly, for the most part, a lot of holiday shopping is done online these days. Hard to pass up a completely hassle free shopping experience for the exact same cost point. There was a time constraint this year as we’re holding my side’s Christmas in a few days. We couldn’t wait for the delivery and there were a few in store sales worth braving the cold and hectic morning. Then there’s today where we do head out to help our local small businessmen and businesswomen. I mainly mention this because we are home now and basically exhausted which is good news for you since wind down for me generally involves blogging! Been hitting the Halloween posts on my other blog this month, so opted for this today. 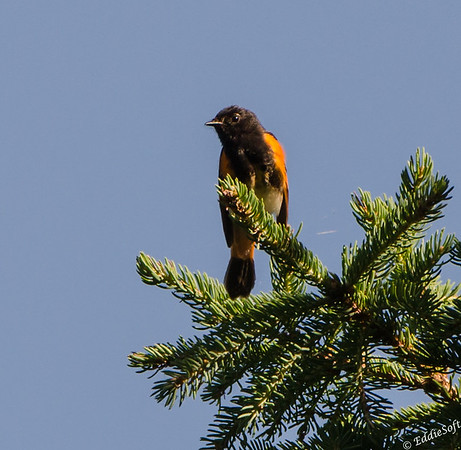 The American Redstart is one of the more colorful birds available to us in the US. Although they winter in South America, they can be found in the contiguous states with the exception of the far western states either during migration months or summer residence – that according to Cornell. Other references are a bit more restrictive on their region. One place I know they are abundant is Northern Minnesota along the Lake Superior coastline. 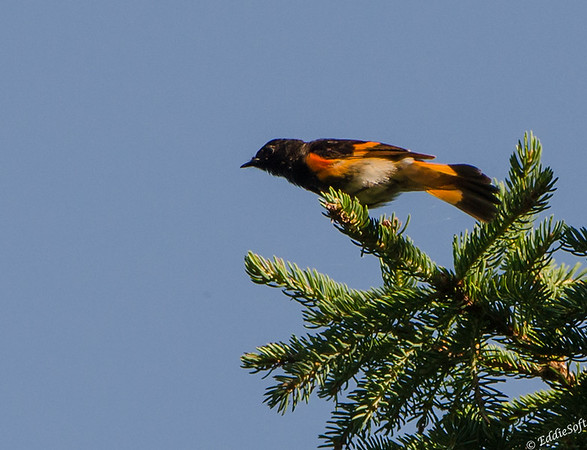 This series of Redstarts were captured on our recent trip up north in July 2017. They were found everywhere we stopped along the coastline that had a sufficient amount of trees. The two shots above, were taken while exploring the falls at Gooseberry Falls State Park. On the trek back to the car I kept hearing a very high pitched squeaky call coming from the trees along the path. I’d stop, look around, take some scans with the zoom lens before frustratingly giving up and walking on. This scenario played out several times until an orange glint caught my eye towards the top of several pine trees. There it was, the source of the sound peaking my interest. Either the valley we were in was playing tricks on our ears, or these birds have an amazing ability to throw their voice. Without seeing the bright color against the green of the pine this stealthy specimen would have gone unnoticed. For the most part, he sat there singing away oblivious to the fact his location had been compromised – must have been showing off to the neighborhood females 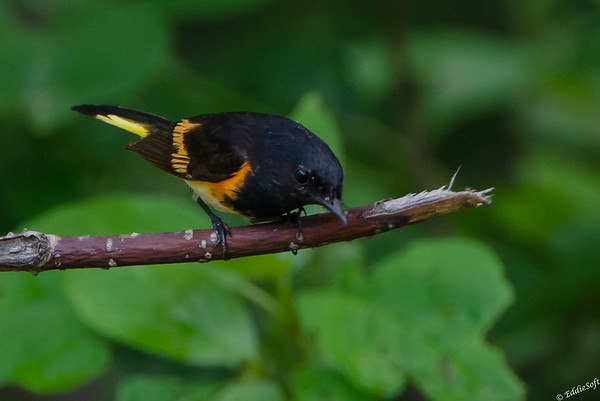 That encounter ended up being significantly easier on the arms than the one we had at the mouth of a Lake Superior feeder river (think it was Tettegouche State Park, but not completely positive on that). We had stopped up there for a look-see. The coastline was pretty sparse on birds with the exception of a real nice Tern that was hunting the open waters. Pictures coming on that find as soon as I confirm the ID with my brother Ron. A smattering of Gulls and that’s it! We headed back to the RV and then it rang out again, that same squeaky song we heard at the other waterfalls. As with the last experience, unable to locate the source. The longer I stood there, the more active the trees became and the more numerous the sounds became. 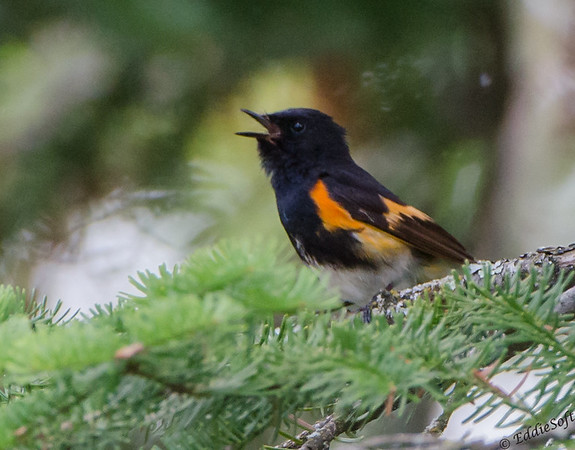 Linda continued on to the RV to take care of the dogs – I was on a mission to get one of these birds in the tin. Cornell describes the Redstarts as “incredibly active insectivores”. Based on my experience that is an understatement. These birds are downright hyper. They would emit their high pitch song, dive into the thicket, dart out for a brief moment to check me out (I guess) and then fly off to a new starting location only to repeat the entire scene again. By the time one or two of the shots here were in the tin my arms were like jello from whipping the Beast to and fro attempting to get a bead on the subject. Eventually called a stop and headed back to the RV to see how Linda was doing … however, not before getting this shot of a female showing off her hunting skills. 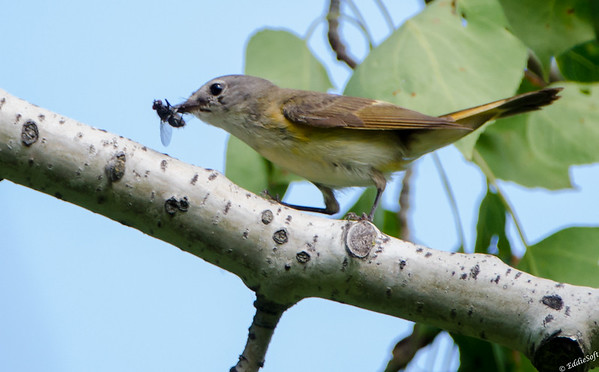 Slightly soft in the face attributable to the microsecond she made herself available for a shot. For those not familiar with this particular species of bird, the females are easily discernible from the more colorful males. The male’s more orange palette is subdued to yellows and the blacks are traded out for browns across the feathers with gray on the head. Based on my observations, both genders need to lay off the morning lattes when us birders come a calling ha! I’m sure those reflexes come in handy when chasing down their insect prey. Learned from a quick read of Cornell that it is believed the Redstart will flick its tail showing a burst of color in order to startle insects into taking flight within the killing zone. Clearly a successful technique based on the image above.

That’s all I have for you today folks. These little birds are truly a sight to see in the wild – just be ready to work to get them in the tin!

4 thoughts on “Exhausted by a Tiny Bird”