As a lead in, let’s take a look at a very colorful bird. 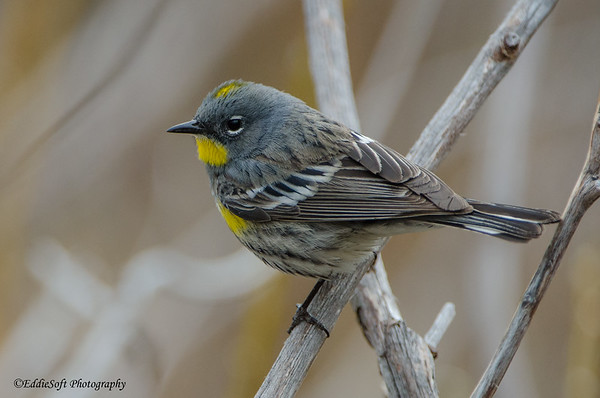 That there is a Yellow-Rumped Warbler. This pretty specimen was shot while on a trip out to the Rocky Mountain National Park in Colorado back in May 2014. Technically it was an add on from a trip to the Denver area for the Teacup Dog Agility Nationals. Linda bribed me with a trip through the park in order to convince me to head out there. I’ve have now tried two times to get the White-tailed Ptarmigan up on the Tundra trail – both coming up empty. Making the best of it, I did get some other specimens in the park, which included the one you are seeing here. Note, I intend to continue going back there until I get that bird checked off my list!

Hit the jump to see and read a bit more about this colorful Warbler!

The Yellow-Rumped is not a new bird to the blog. In fact, they have been featured a couple of times on the blog due to having more than one classification. Specifically, there is the Audubon and the Myrtle variety. As mentioned, each of these has already been shared on the blog – Audubon was featured in January of 2014 based on a Yellowstone National Park encounter (link here). The Myrtle variety was featured in July 2012 post covering birds discovered in Baraboo, Wisconsin (link here). Unfortunately, neither of those series were able to show the yellow crown they sport on the top of their heads. Good news, you can definitely spot it in this series of shots. On the other hand, unlike those other posts, you cannot see their key characteristic, the actual yellow patch on their rump, which were very prevalent in the other two series.

If you took a gander at those other sets of pictures, you probably already figured out the particular specimen captured here is of the Audubon variety. This is easily distinguished between the two by the yellow throat. The Myrtle has white chin/throat. Both will have the yellow shoulder spots, the yellow crown and, of course, the yellow patch on their rump. Their very bold eye rings also helps to quickly get it in the Rumped family. For such a beautiful bird, it happens to be one of the more common Warblers to get. They are prevalent across the US, Canada and Central America.

Cornell’s website comments on their ability to manage their diet with a combination of berries and insects. They also point out their unique ability to consume the waxes found in bayberries and wax myrtles. Its ability to use these fruits allows it to extend further into Canada, sometimes as far north as Newfoundland.

Although not a new bird to the list, I do like this series of pictures and thought you might enjoy them as well. If you are nice and eat your vegetables, I might just hunt down the Myrtle species and let you get another look at them as well. Until then stay warm if you are in the Midwest. Going to be some chilly training runs in the not too distant future.

2 thoughts on “The Same but Different”