As of last night, my busy October is now officially over. Most of that was taken up with our own Haunted Trail efforts which consumes my mornings and nights and everything in between and a number of races to close out the official run season. That gives way to some additional Halloween parties where we get to enjoy the Halloween labors from our friends. Two of those closed up this weekend leaving my calendar fairly free beyond a garage full of decorations that need to put away for next year (some of them are still drying out from the multiple days of rain they had to endure before finally getting them all pulled out of the woods). The last critical task for the month is to complete my blog quota and then we’re ready for whatever November has to offer.

Since we talked about the Yellow-Rumped Warbler in my last post figured it made sense to provide an immediate contrast with the other sub-species of this colorful bird. 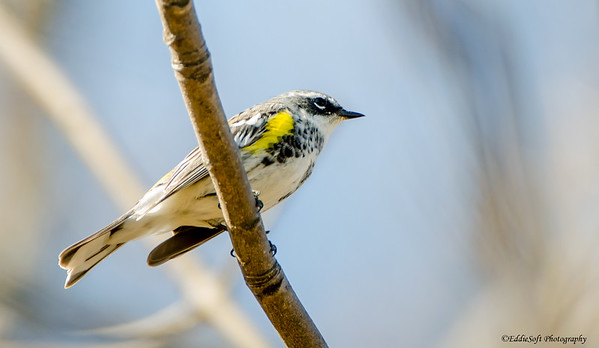 As mentioned previously, there are two main classifications of the Yellow-Rumped. The one we covered in the last post was the Audubon variety as noted by their full yellow throat. The other variety is the Myrtle which you are viewing here. Yes, it has the yellow shoulder patches and the yellow crown in similarity with the Audubon version. And it pretty much goes without saying that it too sports the yellow patch on the rump. This wasn’t very easy to tell in the previous Audubon series, so let’s correct that now. 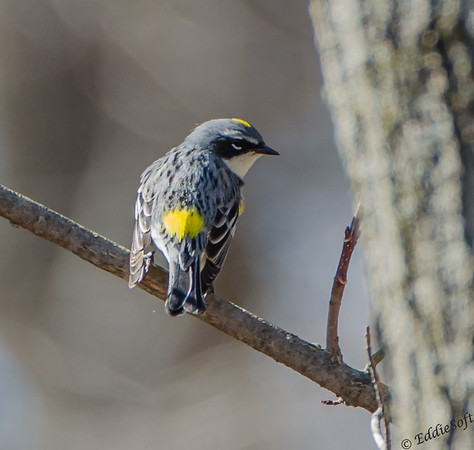 Hit the jump to see and read a bit more about this sun painted Warbler.

You are not going to get a much clearer shot of that. Think this is the first time I have been able to get a shot of a Myrtle with both the rump patch and the crown in the same image. Outside of only getting a brief glimpse of the shoulder coloring (on the right side of the picture) you pretty much get all the main characteristics in that one image – yellow crown, yellow rump, smidgen of yellow on shoulder, the white eye ring and of course the completely white throat. As a quick check, it is confirmed none of the images in the my first post (link here) of this bird showed the crown – as I always say, the great thing about bird photography is you can always strive to produce a better shot even if you already have it in the tin. 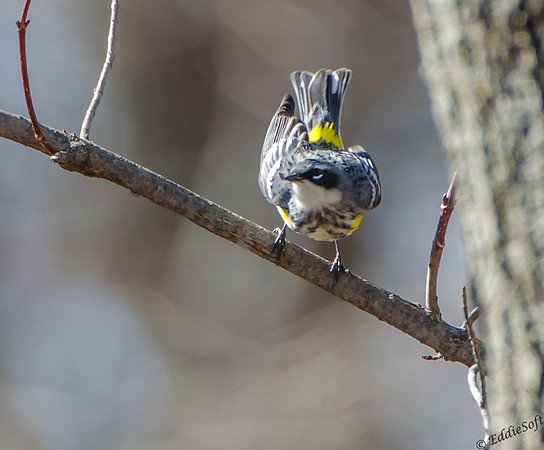 That debut post of the Myrtle variety was taken from a trip to Devil’s Lake in Baraboo, Wisconsin back in July 2012 (well, that is at least when the post was made – guessing the image came a few months ahead of that). Interesting enough, this set of pictures of the Myrtle came from a trip to Wisconsin back in April 2014. I didn’t note the exact location, but based on the rest of the images taken that day, it was likely shot on the wooded trails of the International Crane Foundation. That means it was also taken in the Baraboo, Wisconsin area. Apparently if you want a Myrtle you just need to go to Baraboo – caution though, recommend avoiding the Circus Museum there – waaaaaayyyy tooo many clowns for my liking. 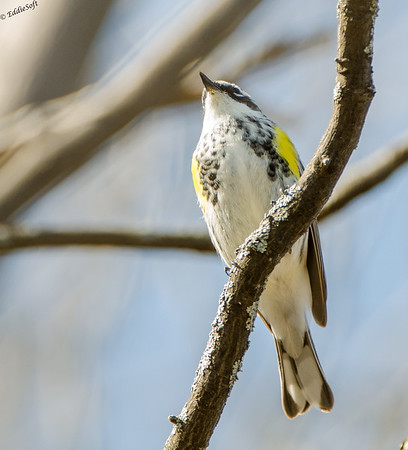 The shot above gives a good look at the main distinction between the Audubon and Myrtle variety. If you compare to the previous post, the Audubon is much darker underneath as it tends to carry pretty heavy black streaking. This one actually has fairly light streaking compared to the reference pictures on Cornell which leads me to believe this one might be coming out of the immature stages. For the record, this would be a male Warbler as noted by its gray/black color tone. The females and true immatures sport a more brown paletted coat. 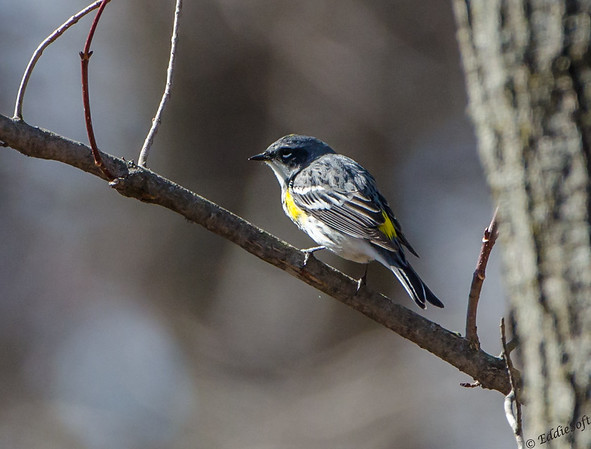 So there you have it.  The same but different varieties of the Yellow-Rumped Warbler. The Myrtle preferring to hang out in the eastern portions of the US and spreading up and down from there, where the Audubon is more commonly located in the west. According to an Audubon article I just read, it appears there is a chance these two might be split into separate species on their own – nothing like getting a free boost on my North American Bird count!

Hope you enjoyed exploring the differences between these two sub-species (at least currently) of the Yellow-Rumped Warbler.

2 thoughts on “Different but the Same”