Wow, I feel like a true slacker. Something like the 15th of the month and I have not cranked out a single post yet. Normally I would feel worse than I currently do when in this situation, but the calendar has been full to the brim as of late. Getting close to Halloween (ask my wife, any day of the year is close to Halloween to me), so working hard on new animations for the Trail of Tears, grass up to my knees in our back lot and a big race coming up in a mere two days. At least the last of the taper runs are done for that race – pretty darn hot out there as of late making those a total sweatfest. Still shame on me for once again getting behind on my posts. Maybe I need a swift kick in the nuts I mean pants to get me going!?!

Speaking of Nuts (hey, these lead ins don’t right themselves you know hehehehe!) 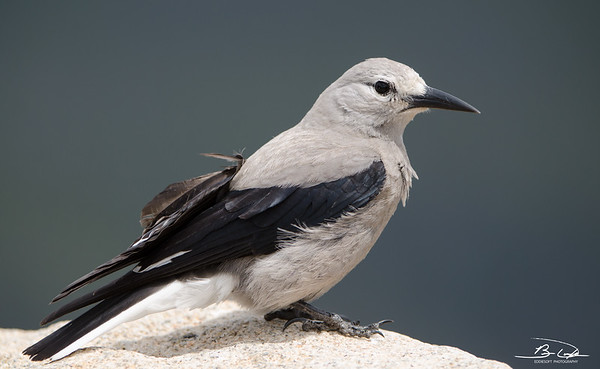 How do you like that fine specimen? For those of you who don’t spend their spare time buried in bird reference books, that there is a Clark’s Nutcracker. It was shot in the Rocky Mountain National Park back in May of 2014. Yes, I know it was more than three years ago – I cringe every time I think about my backlog. A backlog that has grown significantly as of late thanks to no less than two bird outings in the last 3 or 4 weeks and another one a few weeks away. Of course, my brother Ron and I never came upon a Clark’s since those outings were local. You have to travel a bit to see these charcoal creatures. 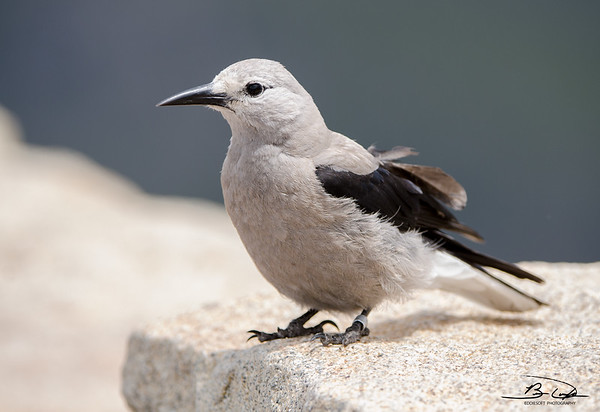 Hit the jump to read about and see a few more pictures of this monochrome bird.

Unless you go West {young man} you are not going to come upon the Nutcracker. With that said, if you do go West … you are pretty much guaranteed to run into one of them (hopefully, not literally). Every time we have ventured out there in the altitude we have spotted them hanging out around the picnic areas or in the pines. So, as you probably gathered, this is not a new bird to my North American Birding List. It is, however, a definite improvement over my last set of pictures taken in Yellowstone (link here). 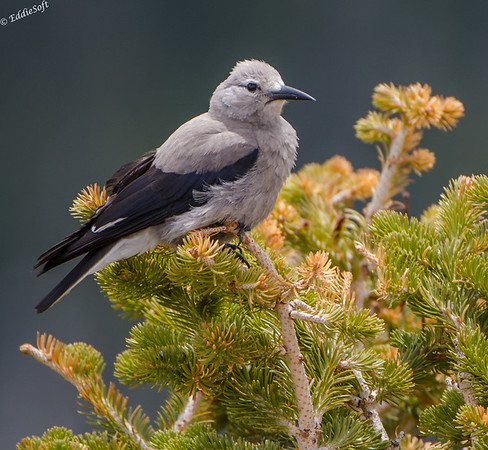 It always helps in photography when you can get close to the subject. This particular specimen was hanging out in a pine at the farthest point along the main road through the park. They still had the top part closed off due to the snow on the road. At the close point there was a pull off area where you could get a great view over the side of the mountains. At first this Clark was content to keep its distance about 100 feet out from the wall. It kept a watchful eye out the entire time The Beast was pointed at it. It must have become jealous because as soon as I had sufficiently filled up the tin and started to focus on the Pikas that were hanging out in the rocks below, the Clark’s decided to fly in and take a position on the wall about 4 feet from me. So close I had to take a few steps back just to get the glass to focus on it. The first shots (well, and the last) were taken from this much better vantage point. 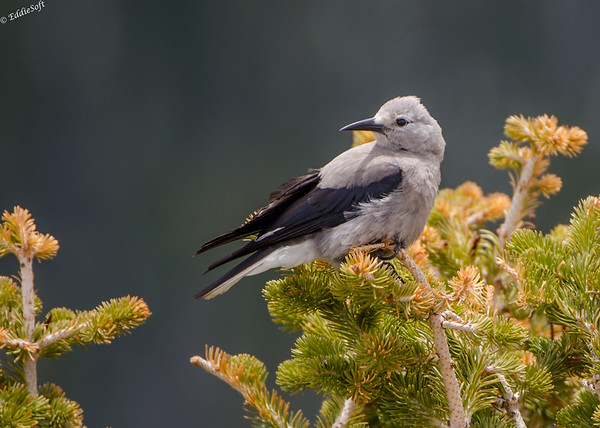 This Nutcracker must self identify as an Owl ha! I thought you could see something in the last shot, but on closer inspection it wasn’t that clear. If you go back up to the second image in the post you will be able to easily see this particular specimen was banded. Didn’t catch this while shooting or I would have tried to get a shot good enough to read the numbers. Foreshadowing alert, there is an upcoming post about some birds that were banded and was able to distinguish their numbers for reporting into the bird tracking organization. Also saw a banded Sandhill Crane at Chain O’ Lakes a couple of weeks back that Ron and I are hoping to submit to the tracking site as well (that is if we ever get around to getting them processed).

And lastly, wanted to give you the full view of the bird. The Clark’s is pretty easy to identify so no need for too many angles. Just to be complete and give my loyal readers the full bird experience, there is the backside. It must have been having a bad feather day. 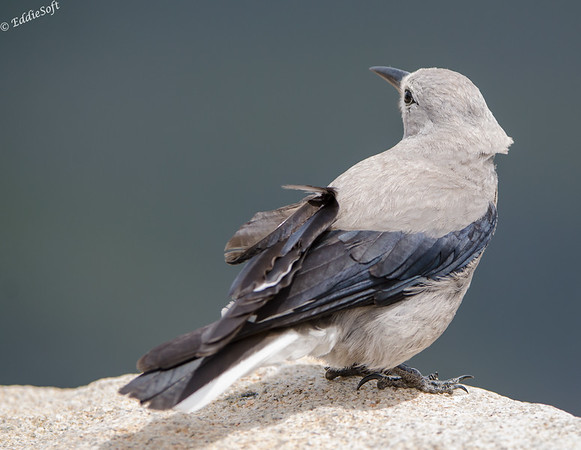 Looks like I’m out of pictures. Let’s look at some quick facts – hate to leave you empty handed if you are not familiar with this particular bird. According to Cornell, these members of the Crow family have a special pouch under its tongue in order to carry seeds it harvest from pine cones (thus the strong bill). Not sure how they know this, but they also claim they have an excellent memory and can locate most of the thousands of seeds they hide throughout the year. Finally, unlike most members of the Crow family, the male Nutcracker also assists in the incubation of eggs. How fitting seeing as how Father’s Day is just around the corner.

With that, I will call it a post. Hope you enjoyed better pictures of the Clark’s Nutcracker. See you again – fingers crossed – soon.