Thought I would pull out a post today that represents how my run went Saturday night.  I’ll post in detail on the Midnight Half Marathon race I mentioned in the previous post.  Let’s just say for a tease that it was bitter sweet.  There was a high moment and a whole lot of BAAAAD that happened that night to the point that Linda brought out full scorn and I didn’t even switch to the full marathon (and thank god I didn’t!).  It was “black” out for the second loop and that is the loop I felt like “death” was calling me from the graves as I passed.  This all pales in comparison to the trip home but more on that later when I can stomach the recollection.

Based on that, I cannot think of a better post topic.

That my friends is what I believe to be a Black Vulture!  More importantly, that would be a Black Vulture that gives me a plus one on the birding list.  I actually had to spend some time looking at this particular bird  to really determine if it was a Black Vulture or rather just an immature Turkey.  Based on the reference books, the Turkey Vulture is like everywhere in the US more Northern in the summer and more Southern in the winter.  In fact, I’d be tempted to bet you no matter where you happen to be in the US, you will likely see one tomorrow soaring overhead.  Note, if there are bunch of them circling over just your head… you might consider checking your pulse or do and immediate safety check.

Hit the jump to read a bit more about the Black Turkey.

Now, clearly the Turkey’s red mature head will give it away.  Unfortunately, the immatures have a similar gray head.  Blacks actually have a smaller stature and a shorter tail length, but that again is difficult to  tell without a side by side Turkey comparison.  Now, there is another clear way to tell them apart and that is the underwing.  Turkeys have a white feathering on the back portion of their wings – the black body also makes a nice V pattern with the blacks on the front edge of the wings.  Black Vultures on the other hand just have the white highlights on the outer tips of their wings.  I am sure you noticed, there are no underwing shots to help you out in this batch.  They were busy cleaning up the dead and were more interested in drying out their oily wings rather than taking to the skies. 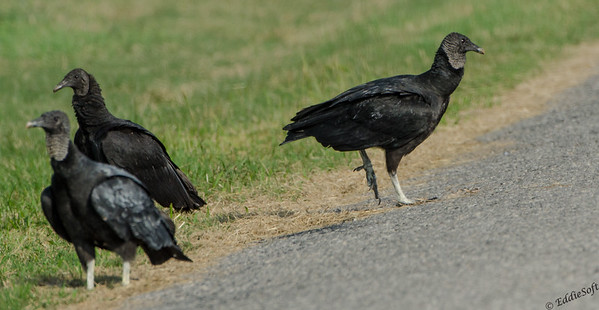 However, there was one tipping pint that sealed the identification for me.  Turkey Vultures have what appears to be lighter if not brown highlight on the tops of their feathers.  In contrast, the Blacks have jet black coloring which matches very well with the specimens here.  Note, Blacks tend to spend their days in the deep South and all of South America so that lined up well on the region front.

Ooops, out of Black Vulture shots.  How about some quick facts.  The Black Vulture has the highest population of all vulture in the Western Hemisphere.  Unlike their Turkey relatives, the Blacks do not have a keen nose for the decaying flesh that makes up their diet.  To compensate where their regions overlap, the Black will soar much higher than the turkey and wait for them to detect food opportunities and then swoop down to share in the spoils (pun intended heheheh).  The larger stature from the T’s can hold their own at a feeding site with the smaller Blacks, but those cunning bastards know that numbers can turn the page on the generally solitary red heads – this according to our friends over at Cornell.  I find this interesting since I rarely see just one Turkey Vulture – more typical is the 3 or 4 number circling the skies with their customary rocking back and forth.

Figured I’d go ahead and throw in a shot of the Turkey Vulture we saw out there as well.  This is probably one of my favorite shots of that bird, but since they have a face only a mother would love, it isn’t something I would proudly display on my walls… wait a minute Halloween is coming up .. hmmmmm.

Well, have to go work on the basement – times is getting short but I can FINALLY see the end.  Later everyone – hope you do not have nightmares after this post, they are mighty ugly creatures, but they serve a very important part in the circle of life.