How is everyone doing today?  Hopefully better than I am at the moment.  It is rare for me to set a goal and fail miserably at it – I may not get it on the first try, but eventually with a bit of dedication the finish line is reached.  Today was one of those rare times thanks to some god awful heat and humidity that decided to greet us at the start of our training (not practice Ron) run today.  The plan was to knock out the final 13 miles before the taper down started for the two half marathon races coming up in about 2 weeks.  Based on last night’s weather forecast this should not have been that much of an issue besides being out in the rain.  Guess what.. no rain.  Once again the forecast wasn’t even close to being right which is getting to be waaaaay to common these days.  For an industry that declares success at the same level as a coin flip, not even getting that close is an embarrassment.  So instead, we got out of our cars and felt the stinging hot slap of high humidity.  After one loop around Springdale, Ryan and Sung threw in the towel.  Not wanting to give up yet, I opted to replace the three Springdale hills for one mega-hill up to Glen Oak Park.  At least at the top of that, it was flat going until time for the big downhill back to the car.  By the time the hill was conquered, there wasn’t much left in the tank – pounded out 10 and called it a day – sigh.  Let’s hope race day has mercy on us.

Thanks to zapping all the energy out of my body, figured it would be a good rest to get a quick post out.  Today’s featured bird is once again from the big state of Texas in November 2013.

Unlike the last two posts, this particular bird isn’t a new check in the birding list.  However, it is a definite improvement over my previous shots in that it is finally close enough to make out the details and fairly crisp (link here and here).  Something about these Belted Kingfishers that make them difficult to photograph.  It isn’t like they are in constant motion or hyper by any means – more like Herons and Egrets as they simply stair at the water waiting patiently for dinner to arrive.  Once in motion they can be difficult to capture but no excuse for all the soft shots in the past.  Maybe we could harness this voodoo power they have on cameras and make a fortune embedding it into the paint of sports cars – be damned you evil stop light cameras.

By now I can pretty much detect the presence of a Kingfisher by their distinct twilling sound.  Whenever we are by a stream the eyes are in continual scan of the banks outer branches looking for their distinct shape and coloring.  This particular one was easy to spot since it was just hanging out on a support line for a bridge.  It also happens to be a female based on the brown band on the top and side of the white breast.  Males are typically all slate grey and white. 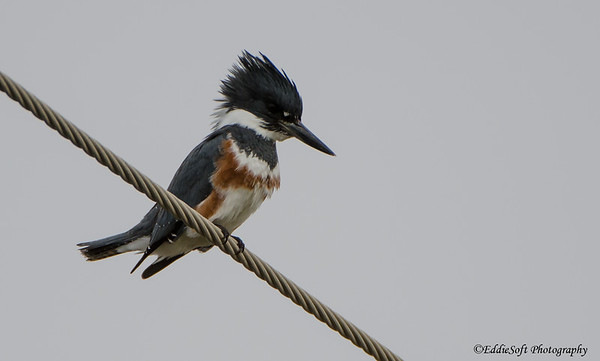 The other feature I really find interesting about the Kingfisher is the eye mark.  In case you are not familiar with these birds, that white spot near their bill … is NOT their eye.  These shots were intentionally left a little dark to obscure the real eye a bit.  The actual eye is all black and is found just back from the white mark.  Wonder if that works as some kind of light aid for their eyes – maybe like how athletes will put black under their eye to keep reflections down.  Crap, out of pictures.  One final fact to leave you with about this bird.  They burrow into the sides of riverbanks to build their nests.  Much like Muskrats and Beavers, they make the tunnel slope upward to help protect the nest from flooding. Tunnel length ranges from 1 to EIGHT feet long.  Wonder if they would be in the market for an underground mining vehicle – I just might know a company that could sell them one.

That’s all folks – time to get off my ass and finish staining my wood trim.  The Halloween party is approaching quickly and Linda isn’t going to stand for the basement not being done again this year.

Oh, before the hate mail gets too high, I probably should have said the Queen of Texas in the title but hey, just going by the name they gave it.