Greetings everyone.  True to form, I’m once again under the gun to reach my quota.  The saving factor is I already have the digital dark r4om work is complete so all that needs to be done is add a few of these wordy thingies and hopefully we’ll be good until next month.  Of course, that doesn’t make me feel much better because next month will be all about the Halloween party prep.. and two half marathons and finishing up the basement and and and – sigh, I’ll deal with that later.  For now, let’s enjoy one of the most beautiful birds in the world. 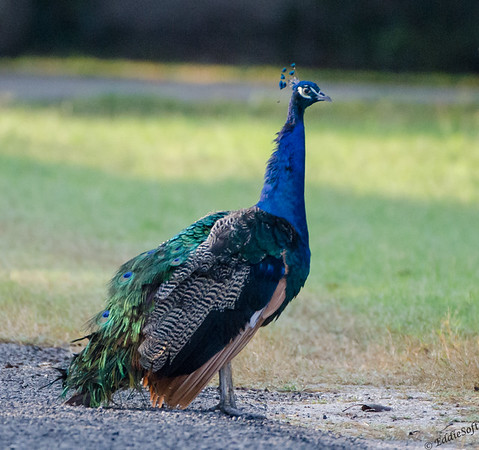 Even though the signature plumage isn’t up on full display, you can probably figure out what this colorful specimen is.  Like the Curlew in the previous post, this bird was shot in Texas.  In fact, it was shot on a side road not far from the field where that Curlew was hanging out.  First off, before I get scores and scores of hate male, I am perfectly aware this is not a native bird of North America so technically it shouldn’t be considered a real +1.  However, after long discussions with my brother, we decided it was not in captivity, free to roam about wherever it wanted so what the hell, we are going to put a check mark in the book anyway – woot! 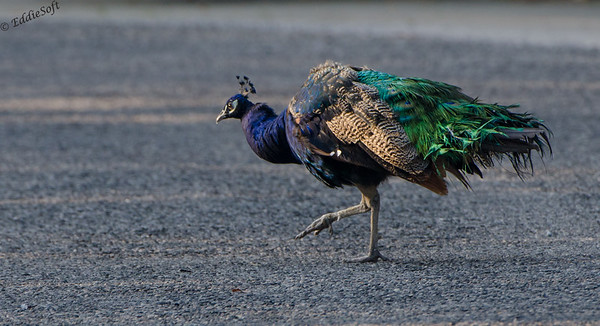 I’ve actually photographed this bird a number of times in zoos and even have images from the Denver zoo of one that was just out walking around free of containment – that was pretty cool – was able to get within a couple of feet of it and experience just how beautiful that plumage really is.  Hopefully those pictures are coming up in the queue because that one would go full fantail for us.  I do not have a lot of pictures of this bird being as it was taken from the car while passing through to get to the Whoopers.  That means we have to get to the facts fast.  Starting off, only the mail is actually call the Peacock.  If you think about that a bit, it makes perfect sense.  Females are referred to as Peahens and the more general term is Peafowl.  There are three types of Peafowls – the more common one is pictured here and the one we are used to seeing at zoos etc, is labeled the Indian one and get this .. wait for it – is found in India (as well as Pakistan and Sri Lanka).  The other two are Green and Congo found in Southeast Asia and … you guessed it Congo.  With that kind of naming, who needs a reference book.   The Peacocks (which you now know is only the male) is the one pictured here, identifiable by the large color palette.  Peahens are downright boring but that is for a good reason – they need to blend into their surroundings in order to prevent predators from locating them while nesting.

To close out a couple more facts,  Peafowl babies are called Peachicks and a group of  the Peafowl are considered a party or a pride.  India considers them a sacred bird  in reference to the markings on their tail feathers which they attribute to the eyes of the gods.  They are ground-feeders preferring insects, plants and small “creatures” as my reference site refers to them.  I laughed at the last fact I found – apparently they are not the nicest birds to be around and tend to be a bit inhospitable to our native aviary.  The reason I laughed is I immediately thought of Ron and how domestic birds tend to attack him – if he ever gets  close to one of these beasts he’s going to have to pull out his Steer escaping sprinting abilities.

All I have for you today folks – have to hit the hay and get ready for a long run tomorrow …. probably in the rain so I get to relive the Illini Marathon conditions once again (link here).