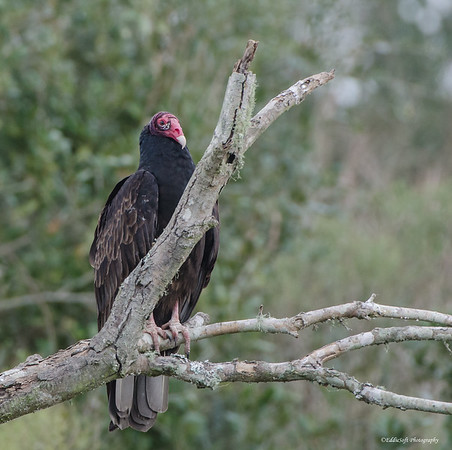 END_OF_DOCUMENT_TOKEN_TO_BE_REPLACED

Okay, we are kinda back on track with Project Chekov.  The last post took us a little out of our targeted  region.  The good news is we are back in North America.  On the disappointing front, I must have been drinking heavy in the digital darkroom one day based on the set of images that were planned for this post.  In the pre-upload check it became apparent that every single one of them was beyond acceptable crispiness – translated, very soft and fuzzy.  The entire set went into the trashcan!  Every once in awhile a benefit pops up from having such a large backlog of shoots – there’s plenty of other bird images to choose from.  Knowing we had taken a number  of shots of this bird while out in Texas, I popped back into the digital darkroom and worked up a few replacement images.

If you are from the Midwest at least, you might recognize these gruesome birds.  That is if you happen to spot them when they are not cruising circles high in the sky.  This hard to look at without grimacing bird is the Turkey Vulture.  The bird is not new to the blog having been featured in a Wisconsin post (link here) and an Indiana post (link here).  The posts from Wisconsin show the more common shots of them in the sky.  The odd thing is they look pretty normal from below and their wing markings from underneath look pretty cool with the white nicely contrasting with the darker wing fronts.  Now when they get on the ground it is a completely different story.  The one above is trying to dry the grease and gunk on the wings collected from playing in whatever dead carcass they happened to find that day.  Think this was mentioned in the previous post, but they even piss on their own legs to help kill the bacteria … yeah, imagine what it feels like to look at these creatures in the big glass.

If you can get past the wings, you still have the face to deal with.

From afar the detail is lost, but up close you can see they have a face only their mother could love.  It is not surprising they have very few predators eesh.  Here is something I didn’t know about the Turkey Vulture.  According to our friends over at Wikipedia – they do not have the common bird vocal organ (syrinx), meaning they can only make hisses and grunts.    It did indeed get its name from the face similarities to the Wild Turkey although it is sometimes referred to as a Buzzard (hmmmm is that due to all the flies that buzz around their food source – just may have to look that up).  Wanna guess how it defends itself..?.. if you said it regurgitates on their enemies you win a prize

Take special note of that beak – their feet are poorly adapted for ripping and tearing the flesh and organs out of carrion – they literally stick their heads into the rotting carcass and rip and tear it apart with that fierce looking bill.  Okay, this is making my stomach queasy so better end this post.  Don’t get me wrong, these birds serve a valuable purpose in the circle of life, but some things are better left in the dark!

Have a good one and catch you again real soon.

Been a little hesitant to make another post after the blistering I took for the less that tack sharp images from the previous post.  This was mainly due to a few of the following shots being a little bit off as well.. hey, let’s go with the “style” excuse.  Actually, there is a reason for the ones below that are less than crispy.  All of these are flight shots taken while hand holding The Beast.  I’ve been working out but it’s going to take some extra reps and protein before I’ll feel comfortable chasing birds across the sky with an 8 pound glass.  I also have not committed to limiting the travel of the glass so once it focuses off the bird it is burden to get it back on target.  This isn’t so much an excuse as it is a celebration of success when one hits the tin in decent condition.  All in all, the following set isn’t that bad .. not gallery potential.. but still worth posting.

Today’s set features not one, but TWO birds and not those tiny Finch types.  When these fly over your head you take notice and every critter under 3 pounds has a near heart attack.  Although, if it isn’t already dead or prefer the water, these two birds are probably going to leave it alone.  One is a majestic bird of grace and color (the good) and one makes you wonder if they were designed by Wes Craven (the ugly).  Both were taken at Devil’s lake near Baraboo, Wisconsin.

First out of the gate is the Blue Heron.  This is not an unfamiliar bird to the blog (see here) and that is because it is one of my favorite shooting targets.  They are interesting to look at and have the photo friendly trait of remaining motionless for long periods of times – perfect for longer exposures when you want to push the ISO down as much as possible.  When we arrived at Devil’s Lake, we really didn’t see a lot of birds in the water (correction.. didn’t see ANY birds in the water) which was not the way I wanted to start the Wisconsin vacation.  The large rocks around the lake made a really nice setting.  So much that Linda decided she wanted to take a few shots of her for the business site.  With the longer glass I was standing back a ways to take the shots when all of a sudden a Heron landed on a rock about 20 feet from where Linda was sitting.   I couldn’t believe what I was witnessing – we were just about the only ones in the area with plenty of more solitaire places all around the lake.  The camera settings were manually configured for portrait mode which didn’t lend itself to bird shots.  By the time I got everything adjusted, the Heron took flight again.

The battle was on to keep the glass on the bird while it gathered air under its long wings.  There is one thing more enjoyable to watch than a Heron on the ground stalking dinner and that is a Heron taking flight.  Those long wings fold out, the neck curves back and those feet come together to complete the aerodynamics.  From afar, those legs are often mistaken for long tail feathers.  Every time I see one of these creatures sailing through the air I immediately think of my early school years when they taught us about the Pterodactylus .. my favorite member of the Jurassic Period (and probably the early seeding of my desire to become an archeologist) – editors note: I am still bitter of being taught the lie of the Brontosaurus .. I also want my planet Pluto back but I’ll save that rant for another time.

Here is another shot of the bird.  I was doing my best to pan along the flight path trying to keep the single focus point on the bird’s eye – thank god for Rear Focus allowing me to keep the focus where I wanted it.  The raised tips at the extent of both wings give a nice composition.  Not sure if I like the sand coming into the frame yet, but I was at the mercy of the bird’s flightpath.

Hit the jump to read more about the Heron and the bonus bird.