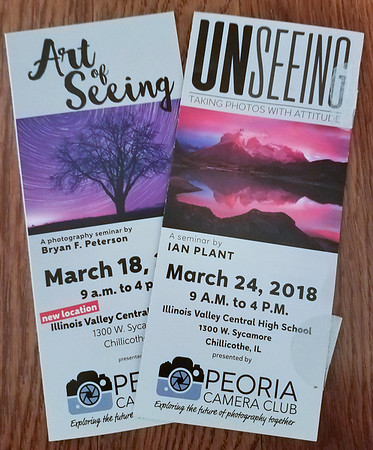 Howdy everyone! It’s been a rough couple of days for me due to a medical procedure that I had to have today. Definitely not one of those experiences I want to go through again anytime soon. The good news is it over now and everything came out good. The doctors want me to take it easy until the effects completely wear off which is good news for my readers – nothing better for a night of relaxation than typing a few paragraphs out on the keyboard for another post. Oh, by the way, the doctors did recommend I avoid going to places like Amazon until my head clears all the way – might end up buying a year’s worth of jams from around the world hehehe. So I Thought I’d feature a topic that didn’t required a lot of prep work and thus going with a recollection from a recent photography seminar Linda and I went to a couple of weeks back. Since it covered both landscape and wildlife topics, went ahead and put it on my wildlife blog as well.

Last year we went to see Bryan Peterson’s photography seminar on “The Art of Seeing”. I was very familiar with Bryan’s published worked and have always considered his Understanding Exposure book to be the best reference for those wanting to turn their camera mode dial to ‘M’ (if you are still using the Automatic or ‘P’ modes, pick up that book and start getting the value out of all that money you spent on your gear). Unlike last year, this year the Peoria Camera Club invited a speaker neither Linda nor I were familiar with. We ended up going to his site (link here) and needless to say was impressed with his work. Based on his portfolio it looked like it covered both my wife’s preferred genre as well as my own wildlife preferences. Only tough part was investing $75/person and uncertain whether we were going to get something for that large investment – you can buy a lot of books or a short trip out into the field for $150. After some debating we opted to do it – if nothing else, this is something we enjoy spending time together doing each year. Turns out the day of the seminar the Heartland got pounded with a white out blizzard that eventually accumulated over 9 inches. We live in the country so trekking out in the deep stuff didn’t bother us much although seeing all the vehicles in the ditches on our way was a bit concerning. The aggressive off-roading tires on my new truck ate that white stuff up for breakfast. Old Man Winter did manage to defeat about half the attendees that were planned to attend. We did get the opportunity to meet some of the members of the Camera Club and spend some time with Julie who I met for the first time during my Audubon speech last month (link here) – an amazing wildlife photographer in her own right.

Ian Plant’s seminar took the exact opposite theme from Bryan’s talk the previous year. While that speech was on the Art of Seeing, Ian’s seminar was entitled Unseeing: Taking Photos with Attitude. Note, it was a bit refreshing that Ian didn’t continually talk about his ex wives or his pension for recreational drugs like Bryan did. From a summary perspective, we both thought we received value from our investment. Ian was very personable to the attendees and kept us all entertained until the end. It also helps that his photography portfolio contains some absolute stunners. For the same reason we go to local photography competitions, seeing captured images that are better than yours is the best inspiration there is. Every interesting angle or interpretation of a scene broadens our boundaries and puts another idea in the toolbox. If I had to pick the two most informative elements of Ian’s presentation, I’d have to go with shooting wide vertical and shooting into the sun. Probably an hour into the talk, someone commented he must be cropping a lot out of his pictures based on the fact he was using a wide angle lens. Ever have one of those moments when your entire understanding of something you’ve been looking at for a while suddenly gets turned on its head? Ian’s response to the question did that – “I didn’t crop anything – I shoot vertical”. Whoa! Now, that was a new concept for both my wife and I. In fact he followed it up with “amateurs shoot wide horizontal”. It all became crystal clear how he was getting such huge depth in his shots from the sky almost directly above him down to a few feet out from his shoes. You can then control the perspective of the background objects (like mountains) by simply tilting the camera up or down. He also shoots wildlife wide and those familiar with that glass know how close you have to get pictures with that gear. He mentioned several times he put himself in harm’s way by moving with his eye through the glass and not realizing he had put himself in dangerous proximity to animals that could kill him. Learned that lesson a long time ago – move in the field with both your eyes open or away from the camera – this photographer will NEVER forget almost bringing his foot down on the head of an Alligator in the Georgia swamps.

On the shooting into the sun aspect, his wildlife silhouettes are absolutely breathtaking and something I would have no problems proudly displaying on my walls. The simplicity of the outline cast by the sun is captivating and such a stark contrast from his landscape photography which is packed full from foreground to background. This is something I am plan to try this year while out in the field. Guessing it is a lot easier said than done, but who isn’t up for a good challenge. Guessing Linda is going to try out some wide vertical shots the next time she is out with the waterfalls (especially since Ian just called her out as an amateur hehehe). Couple of closing points. Ian is also big into drone photography. Apparently he has crashed a few and has since opted for the cheaper versions – my personal concern is where are those crashed drones ending up. Ever since some idiot dropped one in the Yellowstone Grand Prismatic my opinions of drones have been seriously tainted (link here). Ian also doesn’t like photographing the circle of life in action – his story about Lioness’ taking out a male Wildebeest had a traumatic impact on him – much like when he found out how some photographers get those great action shots of predator birds coming toward the camera. A dark little fact that non wildlife photographers probably don’t realize and a technique I am very much opposed to.

In summary, we definitely enjoyed Ian’s talk and worth our investment. Can’t wait to try out some of the things we learned in the field. Be sure and check out Ian’s work if you haven’t already done that. I’ll leave you with his comment that gave me the biggest chuckle of the day “If others don’t like you photographs it is probably brilliant because you can see what others can’t”. Definitely going to be my go to response whenever Linda rolls her eyes at some of my shots hehehe.

Be sure and hit the jump to see more of my takeaways from Ian ‘s talk – the shocking thing is how much I can remember from two weeks ago when I’ve appeared to completely forgotten what I did or said for about 1.5 hours after my procedure today. Linda keeps asking me if I remember doing this and that and I have zero recollection. If jams in Amazon boxes start showing up at the door we will all know why.