“Mama always told me not to look into the eyes of the sun
But mama, that’s where the fun is”

Seemed like an appropriate intro based on yesterday’s special event. Hoping all my loyal readers in the States had a chance to witness the solar eclipse. I opted to stay in the area, so we were only able to experience a 93% reduction. Somewhat disappointing since 7% of the sun’s light is well… still pretty bright – surprisingly bright. Still something cool to experience. Some of my friends traveled further south to witness the total eclipse. That sounded intriguing until they recounted how horrendous it was to get home after that. What would normally be about a 3.5 hour trip ended up taking over 6.5 thanks to going 10-15mph on the main highway back.

In light of that (see what I did there – literary genius I tell you hehehe), I spent some time thinking about today’s post topic. After some deliberation opted to go with something that had a similar “dark” theme. With that said, I bring you this colorful little bird. 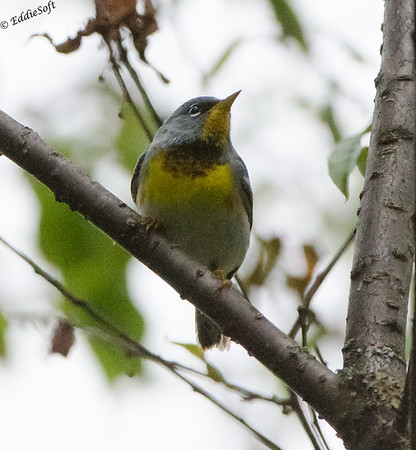 So you are probably thinking .. “How the hell does this have anything in common with a darkness”. Or possibly you just realized what song that lyric at the beginning was from and instead thinking to yourself “that has to be the WORST song ever written!” Either option is definitely appropriate – and sorry for the fact that song is now stuck in your head… “And little Early Pearly Came by in his curly-wurly” Don’t blame me… thank Springsteen. Rather than leave you in the dark on this (I kill myself), these shots were taken in near blackness. Thanks to some fast work on the manual settings, I was able to save it. This is a prime example why photographers need to embrace the M mode. (I can already anticipate the comment I am going to get from my non-Manual shooting brother Ron)

This Northern Parula was captured while Linda and I were visiting Grand Portage MN back in July. We are headed out to photograph the waterfall there. As mentioned in the fox post previously, it was starting to drizzle. As we were walking the path there, an interesting sound came from a nearby tree. By then the rain was coming down harder and the thick forest was blocking out what little light was trying to break through. There are times when you have to focus on someone other than yourself and this was one of them. Linda had recently done something very nice for my birding checklist and therefore opted to focus on the task at hand – waterfalls. Onward we went. Then a stroke of luck happened – Linda couldn’t find here phone. Hmmm maybe I can cleverly disguise a self-centered act as a chivalrous act for the one I love. “Oh no, let me run back to the RV and see if it is there… just for your dear.. wink wink”. Holy crap it worked. I think she even felt bad I had to run all the way back to the RV. Off I went with credits in the bank and an opportunity to solve a mystery. 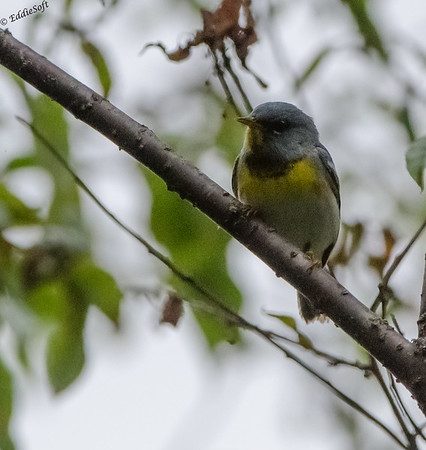 Yes, I made the first priority to get the phone. However, on the way back I kept my eyes and ears on the trail’s edge. Near the spot I originally heard the mysterious song was a young couple also looking up into a tree. Turns out they had heard the same song and was investigating the source as well. Like us, they were unable to spot it. That is when the young guy mentions that it was the song of a Northern Parula. Wow, that dude definitely knows his birds. He then stated, I always love hearing their song, but I rarely ever get to see one. A quick look at Cornell’s site confirmed they tend to hang out in the canopy. Seconds after he mentioned that, the source of the melodic chirps decided to come out for a brief visit. There I was holding big glass in dark forest conditions with a gorgeous bird on full display. No worries, made some fast adjustments and did my best to focus through the various limbs and leaves. Sometimes it goes your way, sometimes it goes horribly wrong – that day experience came through and the Northern encounter can be forever remembered. Note, the couple couldn’t believe anything came out on the image – showed them my LCD and she showed me the black silhouette she got with her camera phone. I thanked the guy out for the assist on the identification and proceeded on to meet up with Linda with a great sense of satisfaction. She got here waterfall shots, we found her phone, she loves more even more and I now have a much better picture of a Northern. Again, the great thing about bird photography is you always have the opportunity to improve on your shots. If you are curious, here were my previous inferior captures (link here).

Have to go work on Halloween decorations now – hope you enjoyed reading about our brief encounter with a cute little bird.

“Was it over when the Germans bombed Pearl Harbor? Hell no! Germans? Forget it, he’s rolling.”  Seemed an appropriate opening since I’m pretty much on a bird post roll at the moment.  Today was a hell night on the pavement with the heat and humidity putting the hurt on (mind you not at heat stroke level in case a certain wife happens to be reading this – just hot and sticky).  The hope was it would rain on me but nooooo, it has to wait until I get home before the cooling water pours out of the sky.  Oh well, just means I’m better prepared for the Bix which is approaching FAST. Keying off the FAST word, apparently I was able to score this new featured bird thanks to some quick camera work.

That very soft specimen is a Northern Parula.  This is another new bird from the trip with Ron to Allerton Park.  The sum total of shots I got of this Parula is TWO.  Two shots taken in rapid succession and then nothing.  No shots before it, no shots after it.  I vaguely remember noticing a bird in my peripheral while trying to track a Brown Thrasher that was occupying a good portion of our time.  Golden Rule, if it has feathers take at least one shot regardless of how many times you’ve put it the tin previously.  Guessing I was passing this off as just another Warbler and went back to trying to get a sharp picture of a Thrasher hell bent on putting a branch between him and me at all times.  While going through the shots in the digital darkroom, the unique coloring caught my eye.  Sure enough, it was not just a common Warbler .. it was a Parula which represents a +1 for me!  Unfortunately, Ron failed to get this beauty in the tin.  We sync’ed up our camera timestamps for this very reason – cross validation – but he claims those times in his collection were void of Parulas – bummer.

To be honest, the deep ridge in the chest might indicate some eggs were on their way – not sure about that… maybe I’ll ask my brother who is slowly building a nice collection of ….let’s say.. very affectionate birds.  Oh, and again, sorry for the softness of the shots.  With only two shots I have to rush to the facts.  First interesting fact to relish is … is …. is … The Parual has nested several times along the Northern Coast of California.  THAT’S IT… THAT IS THE ONLY INTERESTING FACT THEY HAVE ABOUT THIS BIRD?!?  Wow, that is total crap.  Cornell, you have been found wanting.  Wait apparently the Southern variety nests in hanging Spanish moss, where the  Northerners prefer the old man’s beard lichen.  Again, total crap – I don’t remember any beard lichen anywhere near this spot. (truth be told I had to look up what beard lichen was).  That was totally weak.  They do carry a Least Concern Conservation Status and definitely observe a very rigid Eastern half of the NA continent.

On that note I’m calling this post.  I feel like I’ve let you down, cheated you out of your educational value and possibly soured you on the whole birding genre.  I’d feel bad but now I get to go add a check mark to my Birding Life List – at least one of us is damn happy hehehe.