Wow, has this been an event packed month and we are only halfway through it.  Just got back from the Teacup Dog Agility Association (TDAA) Nationals up in Maple Grove, Minnesota (just outside of Minneapolis).  Raven was the primary competitor, but Ruger got to run a couple of runs at the beginning of the event.  4 out of 6 qualifiers for Raven – Ruger… well let’s just say he still has a full head of puppy in him.  I’ll give more details in upcoming posts (waaaayyy behind on my July quota, that’s for sure).  On our way back we had the opportunity to get Ruger introduced to Dock Diving.  He has zero fear of anything and thought he would enjoy the sport – his brother is also getting his” feet wet” so to speak in the sport as they apparently both have a love for driving their owners crazy with their endless energy.

This first session was just to start introducing him to deep water. His breeder introduced him to water features when he was just a few weeks old (part of his performance familiarization). This was the first time since then he had been in water beyond his groomer baths. By the end of the session he was getting much more comfortable with his swimming skills and would leave the dock to get his favorite ball and come back. Everyone was shocked when he put his head completely underwater to go after his ball – apparently that is an extremely good sign! Needless to say we will be signing up for more sessions and finally getting out and filling the 6’x10′ pool we bought him last fall. We can’t wait until he takes his first leap off that dock!!

Being that we just got home from the week long trip, I had to pull today’s featured feathered friend off the wayback queue.

For those of you new to the blog, I have a massive backlog of images (thus all the jokes you probably saw from the long time readers regarding when they’ll probably see the latest tins). To my credit, I have been trying to use a LIFO queue lately and have been getting some of the recent shoots out sooner..just saying ha!

Looking through the queue I found this series of shots I took back in June 2017. What is five years between blogger friends anyway hehehe. Pretty sure Ron was with me for that outing at Chain O’ Lakes State Park near Spring Grove, IL. Been there so many times now it is getting hard to remember all the details without going back and reviewing the field notes. I was originally looking for a “water” related theme to go along with the Ruger adventure. Found this set instead and decided I’d flip it a bit. Our land baby was in the water, so, let’s go with shots of water babies on land. How is that for a shoehorning a cohesive theme. 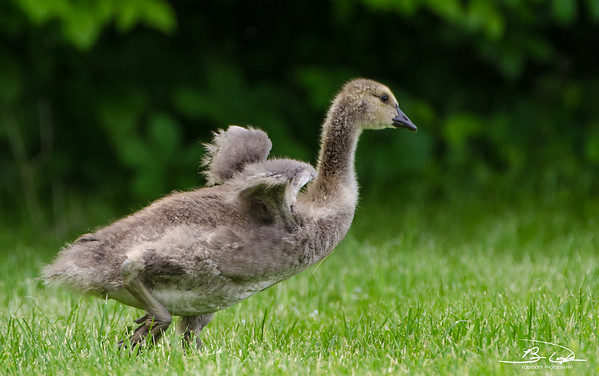 This is probably one of those birds that needs zero effort in terms of an introduction. Close your eyes and throw a dart at a map of North American – you probably just hit one in the eye – maybe you shouldn’t do things people on the Internet tell you to do. Generally I’ll skip wasting digital memory space on such a common bird, but when they parade out their goslings its clickbait.

There were actually several sets of youngins in the mix. The older ones were busy exploring their new world and trying out those new wings. Been a hard day, things not going as planned, a political administration trying to gaslight you or maybe freaking out because you only have 2.5 months before a massive Halloween event (link here) and you have a ream of to-dos left? I have just the thing – find yourself a Canada Goose mother (probably not one you hit in the eye with a dart) out with her goslings and it will put a grin on your face from ear to ear.

These two were still sporting the fluffy yellow feathering and likely not that long out of the shell. Momma was keeping one eye on the little ones and one on me making sure I didn’t cross her comfort level. No worries there, I learned my lesson a long time ago, DO NOT piss off a mother Goose – they will stand their ground against coyotes – we don’t even have big teeth or claws.

Thankfully, The Beast has plenty of reach allowing me ample head start if my fun-loving sarcastic humor gets mistaken for taunting. I hear they get particularly irate if you refer to them as “Canadian Geese”.

“What did you just call me!!! Mommy, that dumbass over there just called me the ‘CN’ word”

“Sorry, sorry, sorry, let’s not get our stubby little feathers all ruffled”.  “Did you hear the one about the Goose that walked into a bar?  The Mallards inside quacked “Even we are smart enough to ‘duck'”.   Feel free to groan.

Better leave it there before I get the comedy hook – I also hear Ruger filling up the whirlpool “you better have your life vest on Ruger!”.

26 thoughts on “Baby dogs in the Water, so Baby Geese on Land”