Well, we are officially off on our exploration part deux for the year.  Just in time, it appears, as our hometown county is experiencing some unexpected high numbers of Covid outbreaks.  Not sure what is up with that, but at the moment, thankfully not something we need to worry about.  So far the birding has been a bit weak, however, I have been able to get a long run in on an amazing set of trails.  Told Linda it was like running on the set of The Last of the Mohicans.  Good for the soul and the long steep elevation climbs was a good reminder to the legs they are still in training.   As it is Flashback Friday, I get to pull from the front of the LIFO queue.  Meet today’s Featured Feathered Friend.

We have been experiencing some unexpected cold temperatures on our exploration.  Our destination should be significantly warmer – in the meantime I have to keep reminding myself we are officially past winter ha.   While looking through the queue, noticed these shots that were taken in the same month and still had SNOW on the ground.

Back in April 2013 we made a trip up to Wisconsin to visit the Crane Foundation in Baraboo, Wisconsin.  One of our favorite areas to visit in our sister state to the north.  I know they hate the saying, but it really is Illinois’ playground.  While we were on our way back from visiting the foundation, we noticed a group of Sandhills hanging out in a field.

Now Sandhill Cranes are one of my favorite birds – their relatives the Whooping Crane (link here) holds the number #1 on the list which was the catalyst for us joining the International Crown Foundation and my renewed interest in birding.  Cranes are an amazing species.  Massive in size, truly a joy to watch especially during courtship rituals and surprisingly accessible at least on the Sandhill front.  The Whoopers will require you to travel a bit, but they can be found quite consistently if you do a little research on their wintering grounds.

Take note of the whiter feathering the Sandhills have in the shots above and contrast that with the browner coloring in the following shots.

The shot above and below are from another shoot in September the following year.  Once again we were up in Wisconsin (time to play ha) and took a quick run over to Horicon National Wildlife Refuge in Mayville.  Absolutely shocking I was able to get anything in the tin as we were in an epic battle to save as much blood as we could from the hordes of Mosquitoes that had amassed there.  Think these were the only two shots that made it out of that shoot before our drained carcasses were left sprawled on the trail.  Per the earlier comment, you will see that these specimens had taken on a browner hue.

This is where it gets a little interesting.  I have always been under the impression that the Sandhill Cranes get this browner coloring thanks to their habit of preening themselves with mud/dirt.  The iron rich material causes the iconic “rustic” coloring.  Went to Cornell for a quick validation and was surprised to find zero mention of that behavior nor the effects on the feathers – nada.

Cornell did mention juveniles are grey and rusty brown and lack the pale cheeks and red caps.  I have had the opportunity to see juveniles up close and can confirm grey and there was some rusty brown, however, it doesn’t really dismiss the preening concept as surely the adults would teach the offspring similar behaviors.. resulting in similar color changes.

Step inside my supercharged DeLorean and rev it up to April 2017.  This last set of Sandhill Shots (starting with the two shots above) comes to you from Chain O’ Lakes State Park near Spring Grove IL.   No snow on the ground this time and you can see the rust coloring just starting to cover the wings above.  Now the specimen below must have been making mud angels. 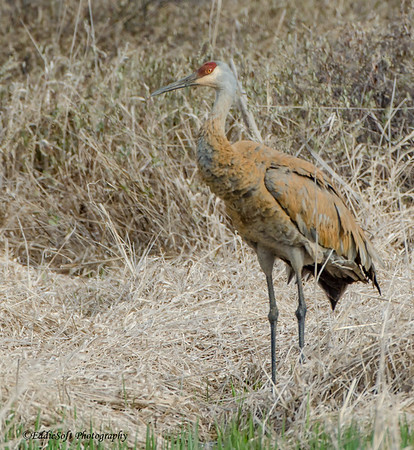 Better get to closing this post out – tomorrow has some traveling in it.  Sandhills mate for life and can begin breeding as early as two.  Every year we have been up at Chain O’ Lakes we have seen the same pair of Sandhills wandering the campground area.  Usually with a couple of colts which makes for some great shoots (link here).

Lastly, I was surprised when I looked at the region maps for the Sandhill.  Seems like I see them everywhere we travel and therefore wrongly thought they were abundant across the states.  Not true.  There is a heavy wintering population in the lower Texas, New Mexico and Florida regions.  From those areas there are really two large migration paths up to their breeding grounds in are fairly straight migrations paths to their breeding grounds in Canada and the upper states (except Montana – they HATE Montana thanks to a long standing feud with the Bison union). 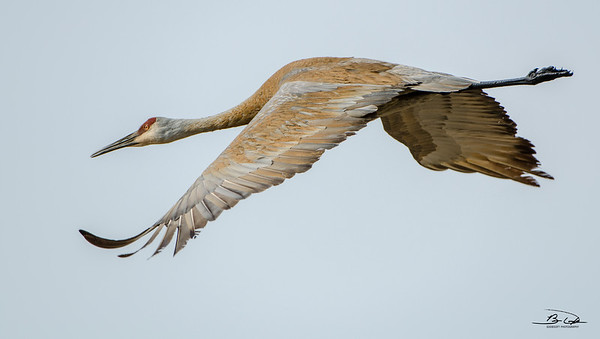 Will let you go there.  Hope you enjoyed a few shots of the big boys (and likely girls).  Hopefully will have connectivity to put up a few more posts while out on the road.  Until then, take it easy and be sure you live and not just exist.