Had to take Linda in for her eye appointment today and since they only allow the patient into the building these days, I’m stuck sitting in the truck. Becoming a common theme lately as we’re trying to get all of our health appointments out of the way so we do not have to worry about them if we decide to hit the road early next year. Since there is not a whole lot to do sitting in a truck on a cold rainy day, opted to bring along the ol’ laptop and recall some warmer times. Fortunately – or maybe that is unfortunately for you – there is still a staggering amount of images from Texas sitting in the blog queue. I came upon this one first so Pecker it is. 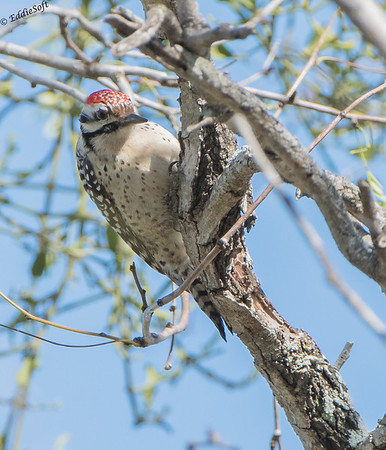 Our featured feathered friend comes to us primarily from the Bentsen-Rio Grande Valley State Park. This state park is located in Mission Texas directly on the US-Mexico border. For my international followers, that puts you directly on the traditionally understood northern banks of the Rio Grande River. Note the word “traditionally” there. As the border between the two countries is defined by a meandering river, at any given spot you may find yourself looking at Mexico to the south, east west and not until my last trip down there did I realize that in some points you can actually look north to Mexico. At the time the latter happened to us, we were a little concerned that we had made a seriously wrong turn or the GPS thought it would be fun to play a trick on us. A quick check of the map set us at ease we were still on US soil. Put that little tidbit in our memory banks. 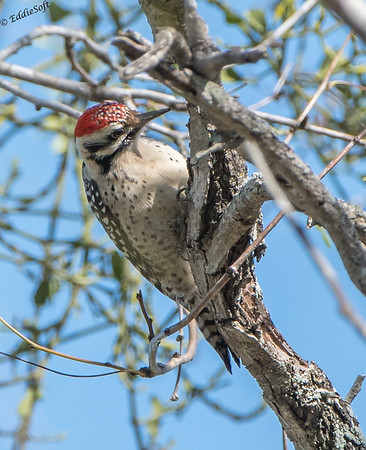 Hit the jump to catch a few more shots of our small Woodpecker.

From a birding perspective, Bentsen-Rio is pretty awesome. They have a variety of terrain/vegetation that our migrating birds enjoy in the winter and more importantly, able to satisfy the Central American residents to come up for a visit – apparently they are oblivious to our map borders. As a result, you get the best of both North and Central America right there in one spot. As Bentsen in rather large, there are still plenty of places to explore – in fact, I have yet to make it down the Rio Grande trail to see what that looks like – at least what it has to offer in the birding category as we’ve been on the banks of the Rio several times now – from individuals that are used to the Illinois and the mighty Mississippi Rivers which both pass near us, to call the Rio Grande a river is a bit of a stretch. In many places I could swim or walk across theoretically in less than 30 seconds – in reality that would probably take months just for Linda get me bailed out of prison ha. 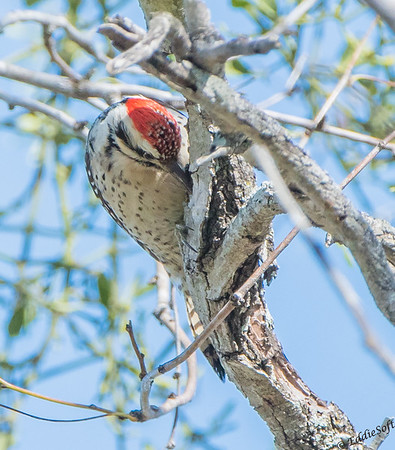 During our trip down there back in January 2018 (I warned you about not getting used to the previous fresh post). Normally I have to work a bit to find a desired bird – crawl through thicket, slog my way through mud, climb the highest peaks, brave shark infest waters .. yeah, Linda laughed at that too.. regardless of your creative description of choice, it does take at least some effort to tin an interesting bird. If nothing else, walking around for hours with The Beast will test your fitness. In the case of this Ladder-Backed Woodpecker there was ZERO effort involved. We arrived, parked in the visitor lot, stepped out of the RV and looked up and there it was banging on a dead branch. Stood there and stared at it instead of reaching for camera so when I finally remembered the “it didn’t happen if not in the tin” rule it wasn’t long before it went looking for other nourishment opportunities. Three somewhat decent shots, a technical reference shot and gone. 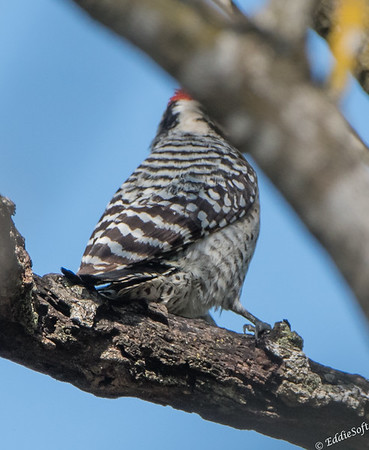 Now the Ladder-Backed has been featured previously on Intrigued, so it is not an official +1 (link here). The previous series was of a female found at Sabal Palms. Today’s post brings you the male version. More colorful than the female as it sports the common red coloring noted in a majority of the Peckers we have access to. There are a couple of ways to quickly distinguish the Ladder-Backed. If you are looking at the male, note how far down the forehead the red cap extends – if it makes it all the way to the eye/bill it is likely a Ladder-Backed. Then you have the key feature both sexes have which is the bar striping on the back – the ladder rungs if you will. The technical reference shot above shows that feature clearly – note it extends all the way up the back. You can also get a good clue from the large black striping on the face, but the other two features should do you just fine in the field. Went ahead and threw in a female shot from the same trip that was taken at Laguna Atascosa NWR 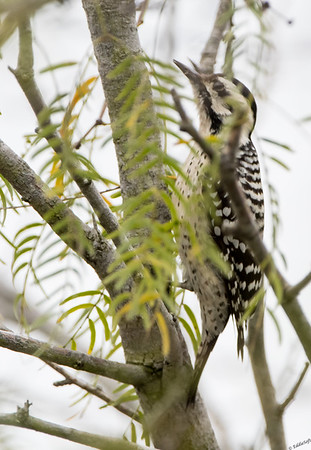 Out of shots so better get to the interesting tidbits. From a region perspective, you are only going to find these Woodpeckers in the direct southern regions of the US and then a heavy concentration down into Central America. Pretty sure Ron has one of these now so I can’t taunt him with this find. They prefer arid habitats and were even once referred to as Cactus Woodpeckers. Cornell does mention they are rather secretive birds and usually require some effort and patience to find – cue crawling through thicket, slogging my way through mud (err dirt) or standing in a parking lot etc. Lastly, it looks like we were there at the best time to spot them as they pair up from January to March and “vigorously” defend their claimed territories making them more vocal and visible. Will have to ask Ron what the rules are for dressing up as a rival Woodpecker (Nuttalls would be a good choice) and just standing in the woods!

Linda’s heading back to the truck.. at least I think she is as she seems to be wandering a bit likely trying to make out the outline of the truck with her dilated eyes – or as I like to look at it – free drunk walk training hehehe.