Curses to you short months!!   Here I was thinking I had plenty of time to address my shortfall with the self-imposed monthly post quota.  Then I look at the calendar to assess the maximum amount of procrastination that could be factored in and then I see it.  Actually, more like DIDN’T see the assumed extra day.  Instead, just an outlined box with the number 1 in it.  Staring at me, taunting me, farting in my general “dee-rection” (in my finest French accent).  As luck would have it, I have some time to address this issue thanks to heading up to Mayo for Linda’s first annual checkup.  Oh, and any talk about purposely delaying this post until we were on the road so I wouldn’t have to drive is assuredly false (as far as you know).   Okay, let’s see what today’s featured feathered friend is going to be. 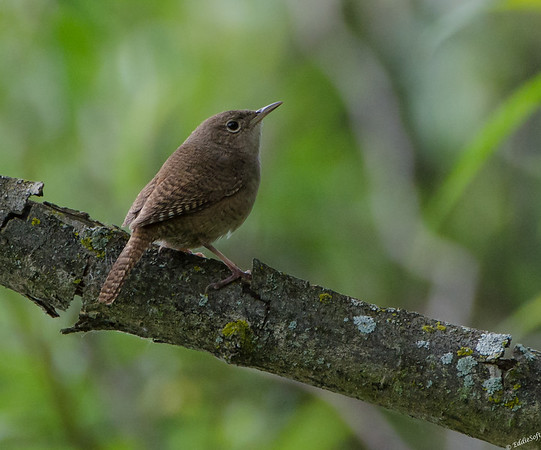 Unlike the last couple of posts, we are short on color today.  We basically have our lighter brown, our brown and wait for it .. our darker brown.  If this species is unfamiliar to you, you might be tempted to tally it up as just another brown jobber.  Normally that would be a safe bet, however, our little bird is not from the Sparrow, rather the Wren family.  Oddly enough, this is one of the few times you will see them pictured where their tails are not positioned above the body line.  In fact, even the next shot has its tail shifted down – bonus! 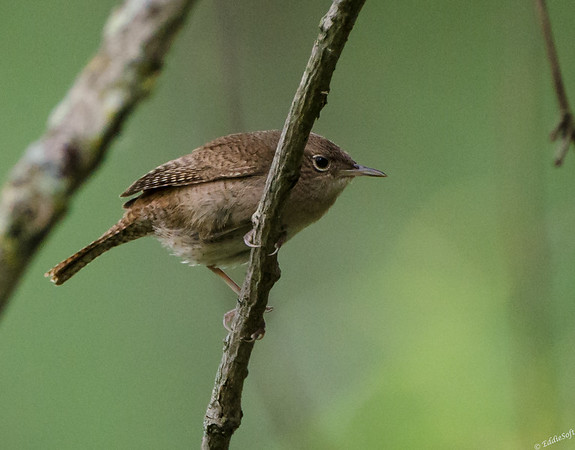 Hit the jump to read more about this drab bird.

Wrens are one of those birds I usually know are in the area by sound long before they are actually spotted.  They are extremely chatty emitting choppy chirps and rapid squeals as they forage in the underbrush.  Not sure what their sugar intake is, but I wouldn’t be surprised if their morning breakfast consists of mainlining Pixie Sticks (hmmm, wonder if anyone knows what those are any more – devious marketing to keep dentists in expensive homes – but yummm).  Not exactly the best bird to try to get in the tin when you are out with the Beast.  By the time you cut through all the brush with the tight focus the ball of energy is off exploring the next branch.  Assuredly an entertaining sight for anyone watching this transpire.  Apologies to the kiddies in earshot as I’m usually cussing like a drunken sailor on leave. 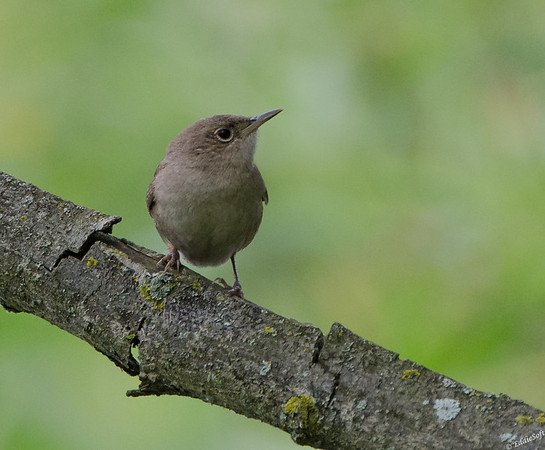 Every once in awhile, I’ll get lucky and the Wren will pop out to a less cluttered area to investigate the shutter slaps.  Cornell’s website mentioned they are a curious bird susceptible to pishing sounds to get them to draw out.  Rather aggressive when it comes to predators in their areas, suspect the Beast is a bit daunting when pointed directly at them.  Once out of the bramble it is pretty easy to identify as a Wren.  Even the specific species is rather easy to tell as long as you can get a good view of the eye to rule out the Carolina Wren (link here) which has a very pronounced white eyeline.  As this was taken in June of 2019, the Winter Wren had not made its way down into the area yet leaving the very common House Wren as the only plausible candidate. 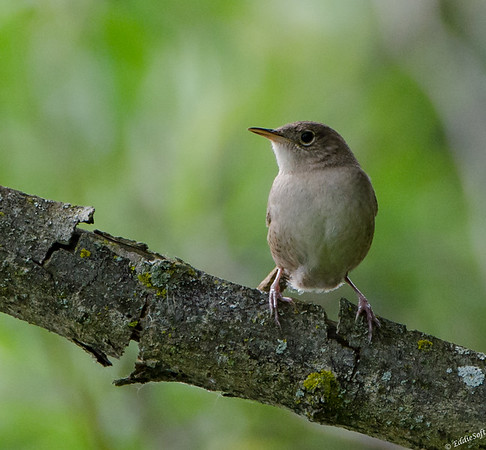 This particular specimen was found at Chain ‘O Lakes State Park.  Pretty sure Ron was with me at the time as we tend to bird that place together.  A rather long way to travel for a bird I can get anytime I want in my backyard.  A Wren family has taken up residence the last two years in the one birdhouse I currently had up on my property.  They need to spend less time foraging and more time with the daily upkeep on their home.  The ungrateful freeloaders let the incredibly fancy house fall into ruin to the point it collapsed during the Haunted Trail party this year.  Two story Victorian with upper and lower balconies, bay windows, fireplace, porch swing – a complete rebuild is already on the retirement list – this time I will demand a deposit and proof of insurance.

Now time for the morning stretch….

push it, push it, just a bit more to get the kinks out… 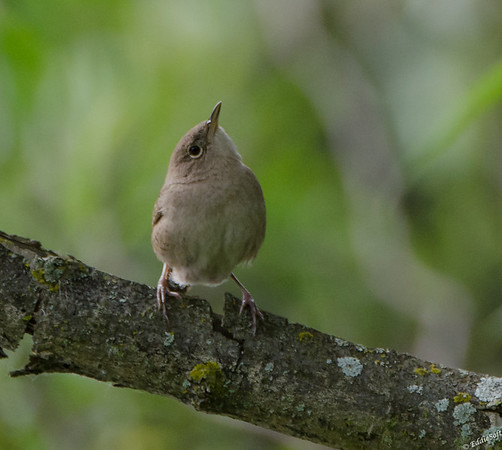 Snap, crack, aaahhhh, there you go!

BREAKING NEWS: Sorry to break into your post reading, but Linda and I just had a really bizarre birding experience in route to Mayo.  I realize you are definitely not used to any accounts this fresh.  As Linda was approaching a large black mass in the middle of the road, she asked me what kind of bird was that.  As we got closer, it became apparent it was a large mature Bald Eagle standing on top of some kind of roadkill.  Linda actually decelerated to give the bird a chance to figure out what it was going to do (I know Ron will be shocked to read that based on the number of birds Linda has hit since I’ve known her – she’s getting more compassionate in her old age ha).  Not wanting to lose its prize catch, the Eagle grabbed the carcass and put everything it had into uplift.  Even though Eagles are in the upper echelon of our local bird sizes, it does not have the lift of Owls.  Slowly it lifted the carcass of what appeared to be a large Cat (poetic justice) off the ground.  Got up about 6-8 feet before it started stalling – still in the path of the car it tried to shift to the side of the road.  Seeing this play out, I immediately told Linda to be careful or it was going to drop the carcass on the car.  The Eagle eventually lost grip either deliberately to avoid the car or just ran out of strength.  Lucky for me, the dead Cat dropped on the side of the road – still way too close to the car.  I can’t imagine how horrified Linda would have been if that had landed on her windshield. – fortunately we were close to Mayo if she needed it.  The entire time my phone was sitting 2 ft from me and I didn’t even think to take any camera shots – Brad M. will be very disappointed and I know, my motto — “no pictures didn’t happen”  (although I do have a slightly traumatized wife to back me up).  This changes my whole impression of the strength of an Eagle and will make a note to keep better tabs on Raven when I see their shadows pass over the house.

Now back to regularly scheduled programming….

Oh yeah, we were talking about our little House Wren. 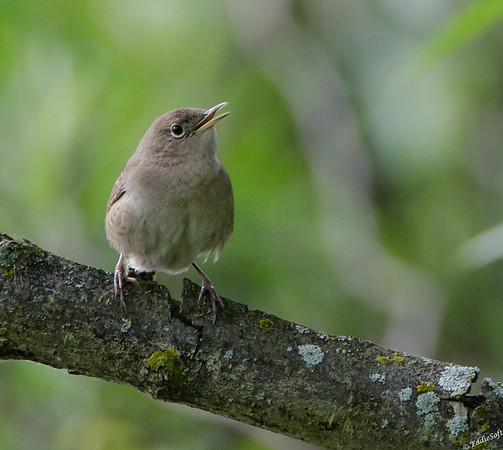 This songbird has the entirety of US and Central America in its range following the typical human snowbirds from north to south as it progresses through the seasons.  In contrast to their size, these birds have no problem fighting it out for nest locations with larger birds.  Around here, a common victim for their aggressions is the Eastern Bluebird.  There is a lot of effort put in by local conservationists to support Bluebird expansion and you tend to see a large number of Bluebird houses in our local parks and wildlife areas.  Out of habit I check these out during my runs to see how everything is going – every once in a while I’ll see a House Wren poke its head out and give a devious chuckle.  I also watched our backyard resident attack an Eastern Bluebird family that was checking out our house – I bet they would have kept the place up better – oh well.

Will call it a post there folks.  Looking forward to December – fortunately, a long month.

4 thoughts on “Three Shades of Brown”