Okay, apparently I needed to be taught a lesson for complaining too much about Internet connectivity. Soon after whining about my provider issues in the last post we were greeted with a nightmare storm. 70 mph wind gusts coupled with solid sheets of rain and if that wasn’t oodles of fun enough – throw in some hail. It eventually got to a point where we couldn’t see the road on our way home and had to pull off to allow it to settle. Finally get home, sit down at the computer to see how long the storm is going to last and bam – power goes out. I’m cursed. Luckily we had invested in a whole house genset soon after building our house in the country – take that karma gods ha. Anyway, all good now, power back and Internet connectivity .. well, better. Let’s celebrate with a new post!

Pretty impressive eh? What, you don’t appreciate shots of plastic bags in a corn field!?!?! The embarrassing thing is I have hundreds of pictures of random bags taken during the winter months. I am guessing this may seem odd to you, however, I would bet that most Midwestern birders also have their share of photos of WBF’s or “White Bags in a Field” – garbage bags, chip bags, Walmart bags – the list goes on – typically at a distance in picked or plowed farmland between December and say early March.

Hit the jump if you want to see the reason for the bag shots – no, I am not losing my mind!

Yes, there is a reason for our madness – here, let me zoom you in a bit. 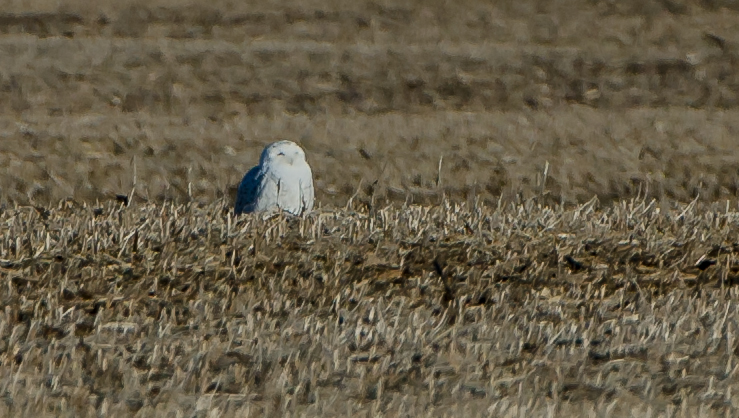 Nope, not a bag this time. Snowy Owls have been gradually making their way down from Canada during our winter months. Due to their rarity, they are a prized target in these parts. Problem is – these Snowies know they are special and purposely make it as hard as possible to get them in the tin. Using a complex math algorithm, these Owls have the incredible ability to determine their preferred sitting location by calculating the maximum distance from all bordering roads – kudos to their math teachers. 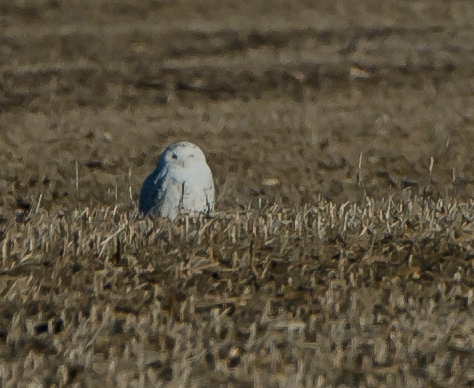 That means these white creatures tend to look exactly like — yeah, you got it – white bags in a field. Leave the wide glass at home, you are going to need all the reach you can get if you want to be able to get one of these white bundles of feather in the tin. That addresses part of the battle. Getting focus on an all white object at the extent of your glass just adds to the difficulties. For normal birds, I’d probably just toss these soft shots in the trash, but any time you can actually tell that it’s a Snowy Owl – yeah, I’m going to feature them. 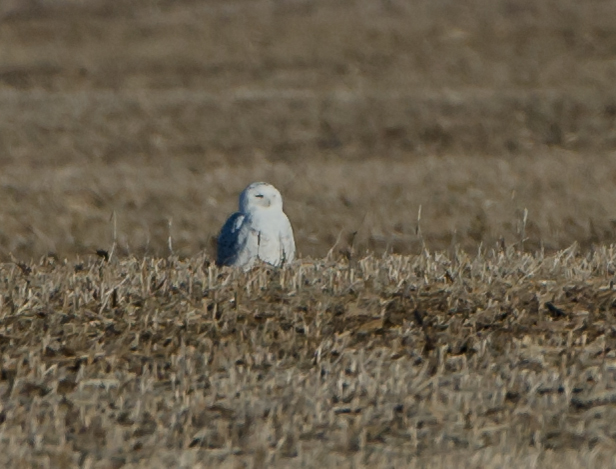 A bit of background on our featured specimen. This Snowy comes to you courtesy of Linda! She is my Owl whisperer and has an incredible ability to a) sleuth sighting accounts, b) decrypt their coded descriptions intended to prevent anyone else from finding them, c) drive us to the vicinity of the sighting and lastly d) FIND THE DAMN BIRD! 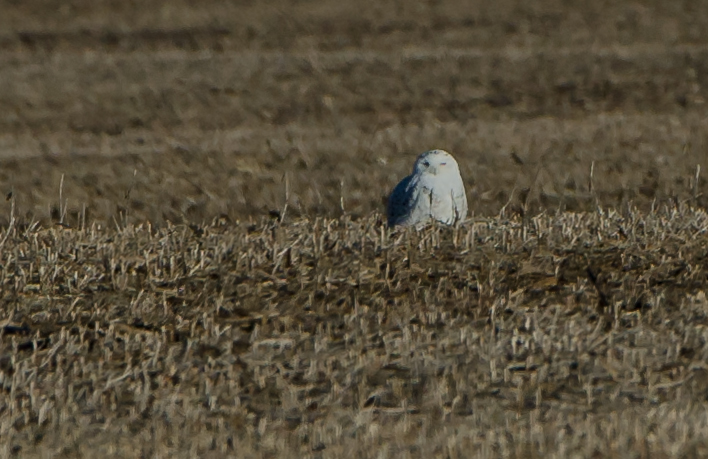 Linda could easily hire out her services and pay for all her agility dog shows for the year. For this particular series, Linda walks into the room last December and asks me if I want to go after a Snowy – rhetorical of course. Slap on some winter clothes, grab The Beast, our detailed county rural map and out the door. An hour or so later we are cruising the fields of McClean county looking for garbage bags. Left, right, up down, reverse, forward, round and round. Scan every fence post, every telephone pole and look for that white spot at the maximum viewing distance. Meanwhile the digital card is filling up with bag after bag after bag. I was just about to give up when Linda proclaimed “There it is!” 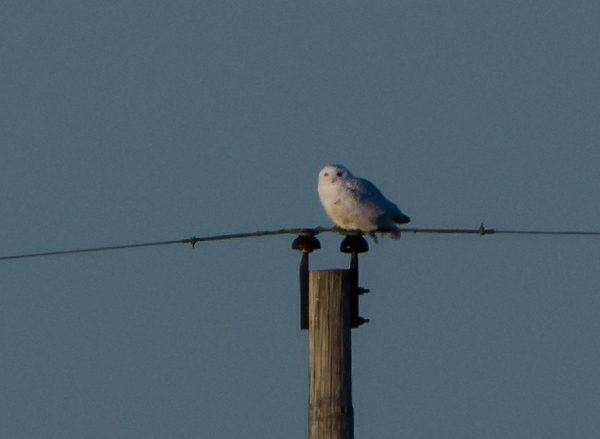 Not sure why I even doubted her, but I did – and I was wrong … again. Sure enough, our specimen was sitting in the $#%@% middle of the field (see first shot) – full on 400mm zoom and the entire bird fit in my center focus square. It took a few shots to finally get one stable enough to tell it had eyes. For the next 40 minutes it was try a setting, take a shot, try another setting, take a shot, VR on, take a shot, VR off take a shot, shutter speed up to try to address the jitters, push the ISO to squeak out a few more steps. Kudos to the Snowy that was more than accommodating by just sitting there the entire time (laughing at us of course per the shots at the end of the post). 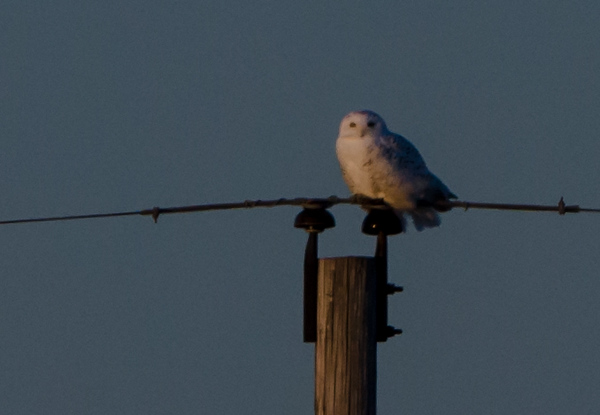 This is when the story took a funny turn. Now, it is well known that I already have the Snowy Owl checked off my bird list – again, the privilege of being married to a Snowy Owl whisperer (link here). Now it may not be known that my brother Ron did not have a Snowy Owl. He has tried a couple of times, but there is one major drawback for him – it requires you to go out in the COLD. Because I am such a great brother, I decide that I should let him know about this opportunity. Although he was like 1.5 hours away birding another location, he decides to make the attempt. That means this bird was going to have to stay there for a loooong time – now that is taking a chance.

In order to not incriminate my brother, let’s just say he managed to find a time portal and make it down to us in like 50 minutes. He pulls up behind us, grabs his camera and heads up to where I was standing. I point out the bag in the middle of the field and he starts snapping away. Less than a minute later, the bird takes off, heads across the field and lands on a telephone pole alongside a crossroad ahead of us. Following the bird photographer code, we took a few shots and then started trying to improve our position. At the same time another car came up on the crossroads, probably saw our cameras pointed in his direction, moves to the side, gets out and pulls out his own camera.

2 minutes later the Snowy flew off into the sunset. The shoot was over. Talk about someone running it close! One red light or missed turnoff and it would have all been for not. It may have only been like 3 minutes, but Ron was elated that he could officially get the check (as soon as he officially posts about it on the blog of course).

The shot above makes me cringe every time I see it. Here we have a rare visitor to our part of the prairie. Traveled for hundreds of miles to enjoy the winter prairies and abundance of rodents they hold after the harvest. Where does this particular specimen decide to take up residence – in the middle of a large wind turbine field. Nobody wants to talk about the birds these damn things chop up – Eagles, Owls, Cranes down to the smaller variety that get disoriented by the rotating blades especially those migrating at night. Sorry, those blinky little red lights that litter our beautiful skylines don’t do much to keep the birds away. Hey, let’s end on a happier note. Our Snowy was having quite the laugh with its Canada friends on Facebook. 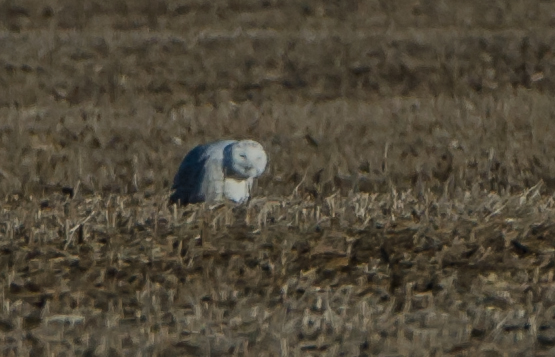 Pretty sure it was tapping out the story of some dude driving all the way from Chicago and it planning to fly off three minutes after he got there. Tap tap tap tap, laugh, tap, tap, tap, tap laugh louder, tap, tap, tap and then it completely loses it – stupid humans. 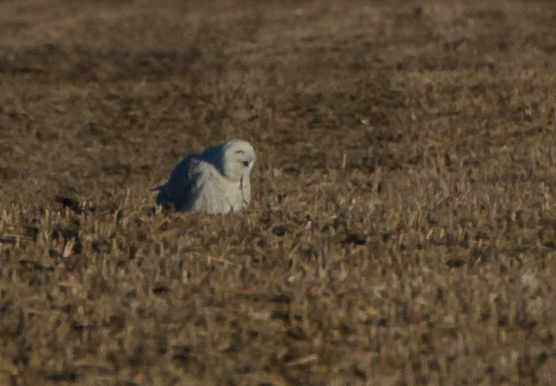 Will put a bow on it there. Admittedly, not the best shots in the world … okay, so maybe be blunt about it and admit they are pretty crappy from a technical perspective. Sometimes you have to take what Mother Nature gives you. Snowy Owls are in my top 5 birds list and always a joy whenever I get to spend some time with them. Yeah, Ron still owes me, but truth be told… I owe Linda as well.