Well, things continue to go bad for Raven and he is officially 0/5 at this agility trial.  I think he is just hot and tired now and his last run might come down to a battle of wits between Mom and dog.  Probably taking a page out of the whiny NBA league and refuses to perform to an empty house.  At least Raven isn’t bending to the will of the great China dollar.  The bad news for Raven means good news for the postapalooza happening this weekend.  My worries of making my quota for June were quickly put to rest and thought I’d go ahead an close it out with another +1. 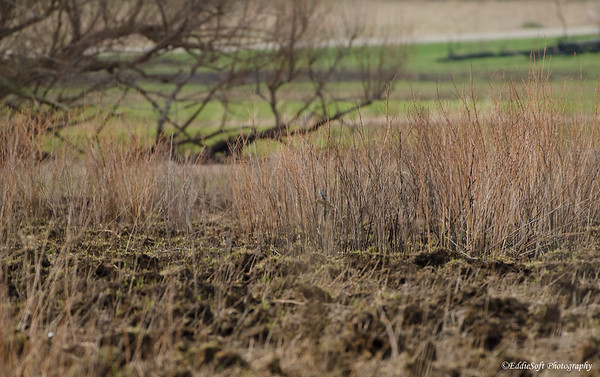 So what do you think?  Pretty cool bird eh?  This is another series of shots that comes courtesy of a birding outing to Chain O’ Lakes State Park.  A bit in the wayback machine as they were taken on April 2017.  Ron happened to be with me that weekend resulting in +1’s for both of us although technically he hasn’t posted on it yet so he is unable to take the full credit.  I on the other hand will be remedying that technicality today.

In the rare case you are struggling to see the featured bird above, feel free to hit the jump and I’ll try to help you out a bit.

We were standing on a trail looking out into the prairie/marsh area when we located the target.  Trust me, the bird is in the shot above (about 10 degrees off center right), just wanted to give you a feel for what we were dealing with trying to get it into the tin.  This bird blends in perfectly with the background when on the ground or flying low which drives the autofocus bonkers.  Thank god we’ve moved on from the film days or I’d be crying over the wasted money based on the digital shots that felt the wrath of the delete key. Some decent shots did survive – even a rare one from the ground. 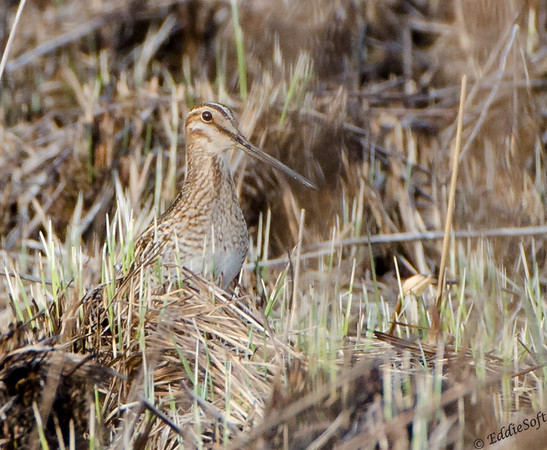 Exactly one time and for less than 3 minutes did one of these birds land in a place we could actually shoot into.  This caught our attention immediately and both shutters were slapping away.  Not sure how Ron’s turned out yet, but only two of mine were decent enough to show (even then, both were eclipsed).  It was pretty obvious what these birds were due to their flight profile and the still shot confirmed the ID of a Wilson’s Snipe.  The standard long thin bill, heavy stripped head and white belly validated. 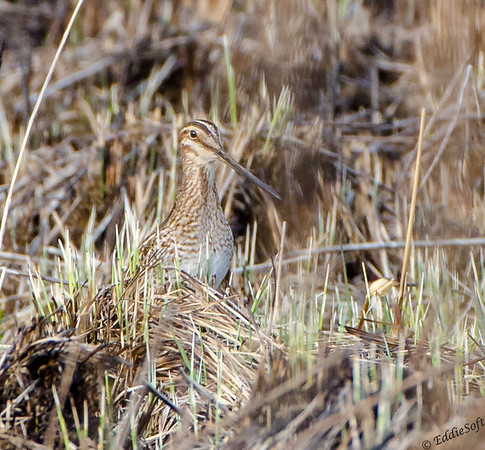 While 1% of the shots were taken while on the ground, the other 99% were taken while these aerial acrobats were in the air.  Now Ron’s rig is pretty light and easier to maneuver.  The Beast is a completely different story.  With a combined weight of 10 to 12 pounds thanks to the glass required for the end to end f/4 and sizeable length, getting focus and maintaining it on erratic flight is a chore and takes every ounce of strength trying to freehand pan – why my off-seasons are spent in the home gym.

Ron and I must have stood on that trail whipping our cameras up, down, left and right for at least an hour.  Guessing we looked like synchronized swimmers – bird would flush, do a series of zigging and zagging before dropping back into the dense weeds and stalks.  Repeats until my arms were about to fall off – next time I’ll offer to switch cameras ha (note, Linda got me a Gimbal head last Christmas which will be a big help in these situations). 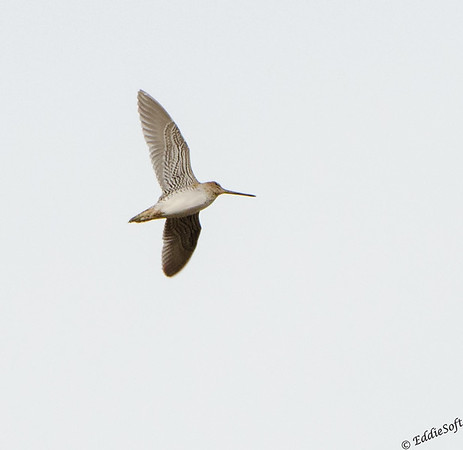 although heavily cropped and slightly soft, managed to get some decent shots that demonstrate the various features of this Snipe.  From the underside you can definitely see the plump white belly and the heavy barring on the wings and side of body. 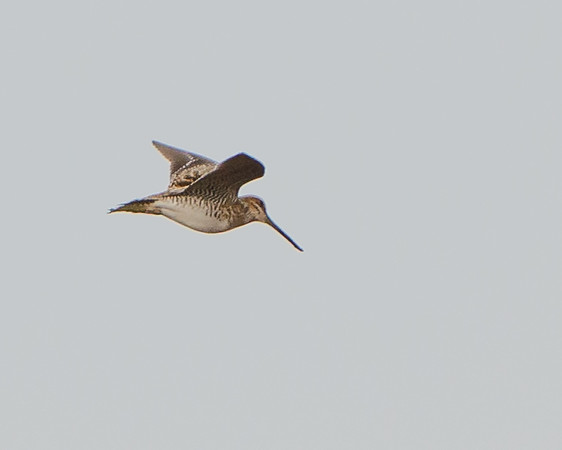 Definitely has that distinctive profile in flight – what seems like short wings compared to that roundish body, a tail structure that looks like it tapers to a point from the side and, of course, that distinctive bill.  As the shot below shows, the tops of the wings appear more solid in flight than they actually are with a white dashed outline of the shoulder to the flight feathers. 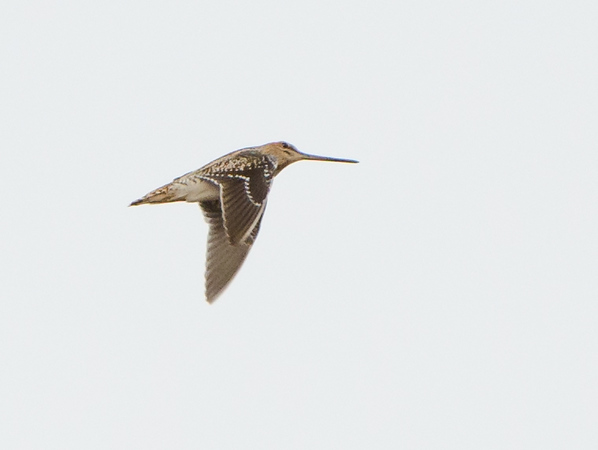 Then there is the signature three solid buff lines down the back which I managed to get somewhat thanks to a lucky banking shot.  Kicking myself I was unable to get a good shot of the tail in this series (might have one from another more recent encounter and will update this post if those turn out).  It’s the tail that contributes to the interesting sound these Wilson’s make in flight.  They will fan it out into almost spade shape allowing the wind to roll over it producing what Cornell refers to as a “winnowing” sound.  Hard to explain it beyond sounding like taking a piece of balloon, pulling thin across your mouth and blowing.  At roughly 26mph, the air over the tail feathers starts producing that sound. 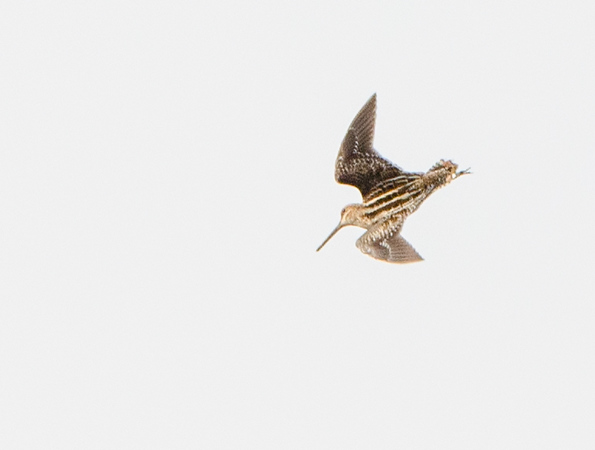 Should probably point out, thanks to their very strong and large breasts, these birds can reach up to 60mph.  From a comparison perspective our Robins are in the 30/36mph range, Eagles are in the 75/99mph range with their massive wings and then there’s the speed demons the Peregrines in the 200/240mph range.  None of those other birds can “winnow” so they ain’t got nuttin’ on the Wilson’s.  Of all the shots, the one below is probably my favorite.  Saw this bird break away from its normal flight pattern and make its way to a local evergreen.   Not sure what was up, but based on the shot I got and the bizarre crash landing it made into the branches, thinking its landing gear got stuck on takeoff.  The shot does show a little of the tail fanout mentioned above. (for those concerned, the flight mechanics were called in and managed to swap out some parts and oil up the gears in time for it to successfully take flight soon after the crash)

Went ahead and left the next shot in just because it was representative of most of the shots from that encounter.  If they were not blurred or completely void of said bird, they were a jumble of stalks and feathers as they made their way back to the safety of the brush. 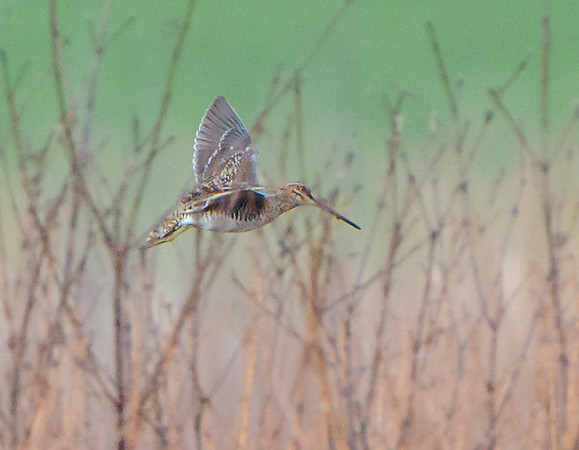 All the difficulties in getting the shots brought a lot of laughter between Ron and I.  We’d call out to each other as one was flushed and then try to shoot it – oftentimes not a click between us.  We’d simply look at each other and go “Nope” laugh and start searching for another.  Can’t wait to see what he was able to get in the tin – with that light camera he should have done better than me.

Did want to leave you with two interesting facts for the Wilson’s Snipe thanks again to Cornell.  First is this Snipe’s eyes are set so far back on the head they can see almost as well from behind as they can from the side and front.  A parental trait juvi Snipes grow to hate during their parental rebellion years.  Lastly, the parents split their offspring up when they are ready to fledge.  The mates part for good with the oldest two going with the father and youngest two with the mother.  Before you ask, they did not provide any follow-ups like what happens when there are 3, or 2, or 1, or if one self-identifies as being older than another.  Need more research Cornell, inquiry minds want to know.

4 thoughts on “Warning, All-Seeing Snipers in the Field”