Welcome to day 2,667 of the Illinois lockdown! If there is any plus side to all this, the downtime is giving my body a chance to finally get healed from the wear and tear brought on by last season’s race circuit. Not sure if it is just the heavier trail course runs or my hatred for Father Time, but injuries are taking longer to heal. I upped my off-season workouts to better prepare for the pending toll, but that has come at a cost of stressing the supporting cast of muscles and joints. Blew my back out last Monday and trying to get that repaired so I can get back on the trails – downtime just makes this whole situation even worse. Already prepping for the race schedule to be nearly back to back when this all lifts which means everything has to be functioning at peak performance. Lemonade out of lemons, have plenty of time to focus on reducing my backlog! 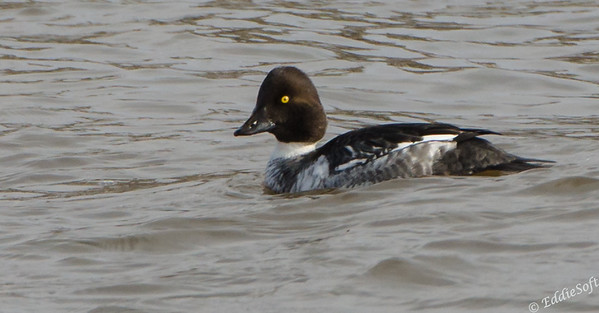 While going through the newly discovered images, found this interesting duck staring at me, piercing my soul with a finely focused golden ray. When the pain became too much to bear, called for Linda to help free myself from its deadly gaze. What could this strange creature be – to the reference books! The duller color palette indicated a strong likelihood our specimen was a female which causes some additional work as many of the female ducks tend to start looking alike as they often have mixtures of brown feathering. 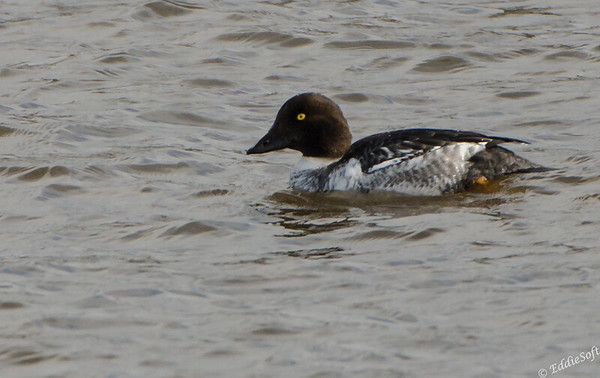 Hit the jump to read and see a bit more about this golden one.

In a quick attempt to limit the search, headed back to the image store to check out if there were any pictures left out when I processed this set. Typically I’ll widen out the zoom to capture any companions that happen to have been hanging out in the general area. These shots are rarely interesting enough to bring to the blog, however, their help in the IDing process is tremendous. Catching a glimpse of a nearby drake keeping watch on a bunch of females or being able to pair up a female with a captured drake can tip the scales if there is some doubt between similar species. Struck out in this case (guessed that as I generally throw a shot like in the queue if I have it). Decided to search on anything with a gold eye — apparently the spirits in the machine decided to visually ridicule me and returned a giant image of DUH! 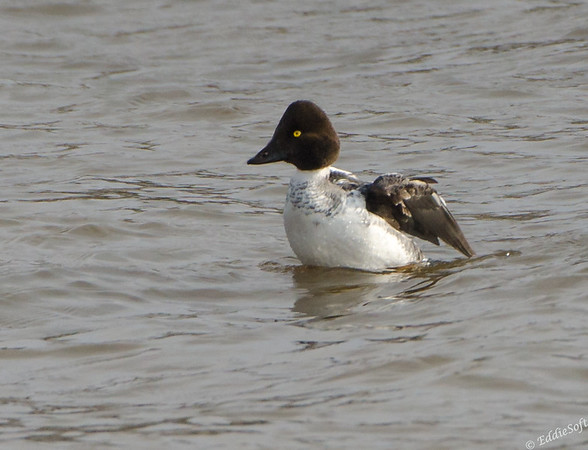 Okay, maybe the mechanical synapses did return the image of the correct duck – but my brain immediately triggered the “idiot” response. Obviously, this specimen was a Goldeneye. A few page turns confirmed it did match the female coloring. The drake is quite dapper in its iridescent green head and splashed white wings with black details. They also sport a large round white patch between their eye and bill – much smaller than say the Ruddy Duck and more forward than the female Bufflehead. As you can tell, from these shots, the female Goldeneye lacks this spot entirely. What it does share with the drake and the root of its name is the distinct and bright eye. Incredibly beautiful – almost glows if you get the light to catch it just right. There are actually two Goldeneye species – the Common Goldeneye and the Barrow’s. Luckily there are three key distinguishing attributes. One is is your feet. Depending on where your feet happen to be can be a big differentiator. Standing anywhere other than the upper Northwest of North America it is a high likelihood it is the Common variety as the Barrow’s has a much narrower region compared to the broad entirety the Common tends to roam. Second is the bill. If the specimen has a lot of yellow/orange on the bill the lean is to the Barrow’s (the one here shows no yellow/orange on the bill). The last indicator is more of a relative comparison that can be difficult to verify in the field. The shape of the head on the Common is more triangular vs the flatter more rounder head of the Barrow’s. Easy to tell once you have them side by side – unless you are able to really see the steep triangle from bill to head I’d leave this one to when you get back home. 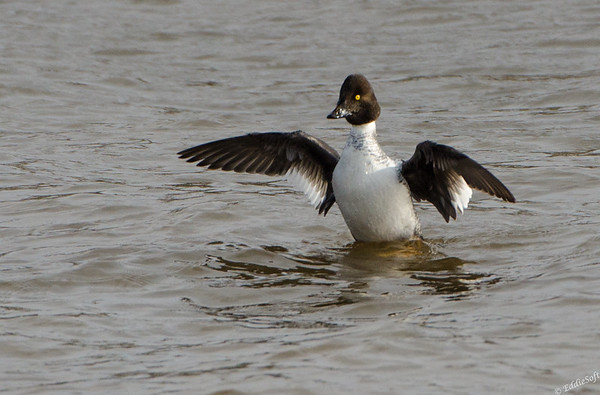 Okay, that brings us to the end of the shots. Not that I didn’t take a lot as there were plenty in the tin. Unfortunately these were the least soft and opted to toss the others (clearly even these could have used a little better execution). Should probably mention that this specimen come to you from the Lock and Dam in LeClaire, IA. We were up there for our traditional Eagle shoot in January 2017 – I’ll blame my freezing hands for the soft images ha. I know a lot of my birder friends head up there so keep your eyes open for the Goldeneyes. On the facts side, these Goldeneye females like to drop their eggs on their neighbors – on closure looks like it’s a free for all between the two Goldeneye species, Wood Ducks and Hooded Mergansers according to Cornell. Like the Woods, the Goldeneyes nest above the water/ground in whatever tree cavities they can find or the kind people who provide nest boxes. Talk about tough love on the parenting front, a day after they hatch, they leave the nest.. translated controlled crash to the ground as they heed the call of their parents on the ground – the true antithesis of our lockdown.

Going to call it there for a post. Excited about this one for the ladies… as in a +1 on my list thanks to this female Goldeneye. Stay fluffy everyone!

12 thoughts on “One for the Ladies”