So last post I tried to cheer up the world with some cute furries and a few of their friends. Not sure it worked, but hell it was worth a try. Things are going from bad to worse here as our tax evading governor has now put my state on lockdown scheduled to begin tomorrow at 5pm or so. All non-essential establishments shuttered. This resulted in a quick run to our local grocery store to pick up a few essentials to make it through the next couple of weeks. As I watched the metal shelves slowly reveal themselves I could only think back to my high school days in the retail industry 5- 11pm during the week and 8s on the weekends. Those days were hard enough, yet nothing like what these workers were having to go through now. I also thought about my blogger friend across the pond going through the exact same chaos. So, thought I’d dedicate today’s post to B over at Butterflies to Dragsters.

First off a warning – if you want good shots, got to B’s site. I suck at these winged missiles and my rig really isn’t set up to get the detail they deserve. Not to mention keeping The Beast sighted on these unpredictable Butters will put a serious hurt on the arms. Secondly, you’d think these beauties would be easy to identify – unique patterns, varying color profiles, how hard can it be… answer damn hard. Eventually got what I thought were some close reference pictures and went with it – thank god for DuckDuckGo.

Found this specimen on our trip up to Minnesota back in July 2017. Birding happened to be a little thin where we were at so I went looking for some other targets. There were tons of these Butters hanging out in the parking lot. I would spot a particularly colorful one, get the glass on it.. shuffle back to get it into focus range and press… well, start to press the shutter when it would take off. Time after time they did this to me. Finally got one or two in the tin and then decided I needed to get a shot of it fully open. Must have been quite the comedy routine for Linda as I ran around trying to get one to stay around long enough and willing to fold its wings down. 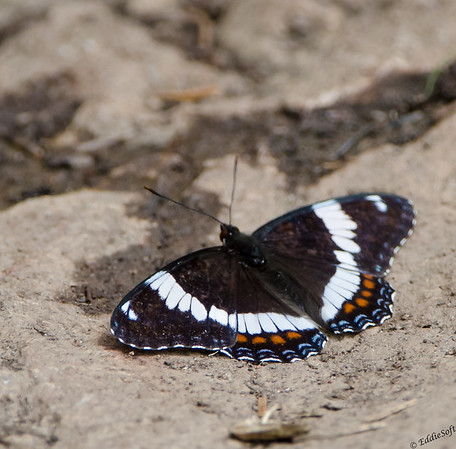 Hit the jump to see a few more average shots of beautiful creatures.

As far as I can tell, I think the shots above are of an American White Admiral. A stunner for sure. Okay, next up a resident of the woods at the International Crane Foundation up in Baraboo, Wisconsin. We are members of that foundation and try to get up there at least once a year to see how the Cranes are doing. Awesome place if you ever have the chance to get up there. 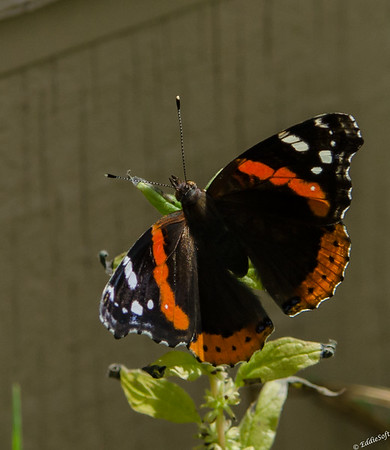 Like the White Admiral (if that is what it is) this specimen had the patience of a Gnat. Land just long enough for me to focus and then off to the next flower. Honestly, no idea how B gets such great shots. Was able to get a few decent snaps of both wings down and then up. 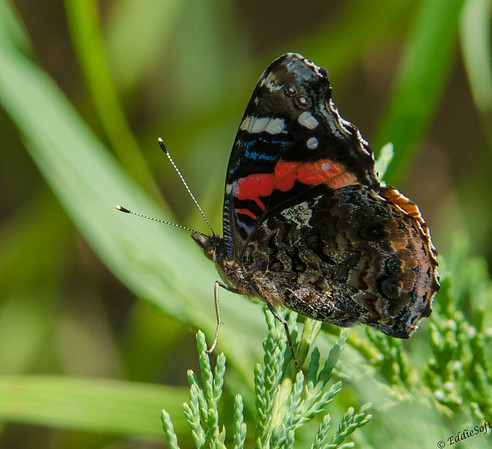 A few hits with a search query indicated the ICF shots were of a Red Admiral. Probably have an equal chance of IDing a juvenile Sparrow. Speaking of brown, the specimen below comes to you from The Rocky Mountain National Park. 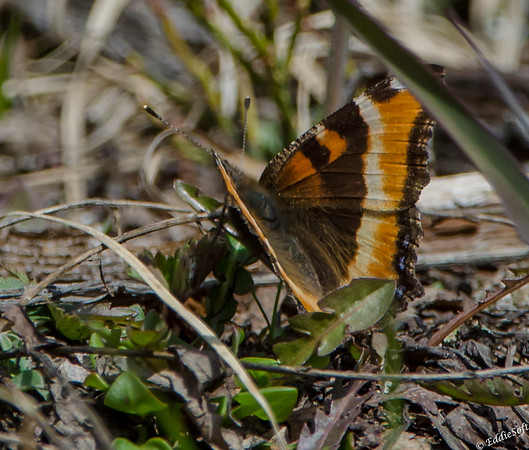 Brown body, large orange stripe bordered by a white stripe along with a few orange patches higher up the wing. Want to guess what kind of results you get with that search criteria. If you guessed about a thousand images none of which look like the specimen above, then you are absolutely correct. After wading through Monarch after Monarch decided this particular Butter has never been discovered before. I shall call him Squishy and it shall be mine.

UPDATE:  Thanks to Butterfly Extraordinaire B in the UK who came to my rescue and was able to ID this Butter as a Milbert’s Tortoiseshell.  Kind of sad in a way as I really really wanted Squishy.  Oh well, I can save that name for the next bird I am unable to identify ha!

On to Asheville North Carolina back in July 2014. 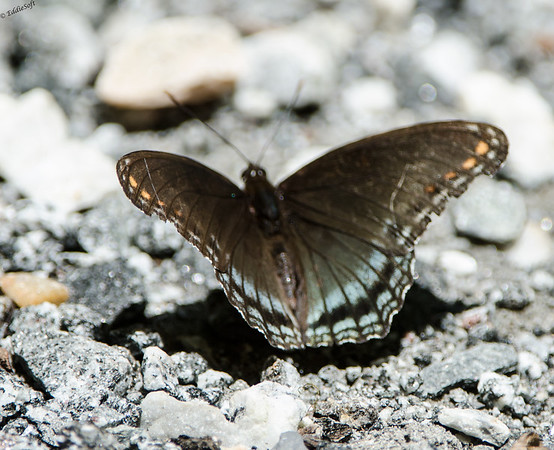 Okay, this ID doesn’t get any better. From what I can tell these Butters might go through some color fading over the course of their life. If my searches are accurate, it looks like the shot of the specimen above from the Biltmore Mansion might be a faded Red-Spotted Purple. I say faded solely based on the fact that the shot below from our Georgia trip back in May 2015 is significantly more vibrant. 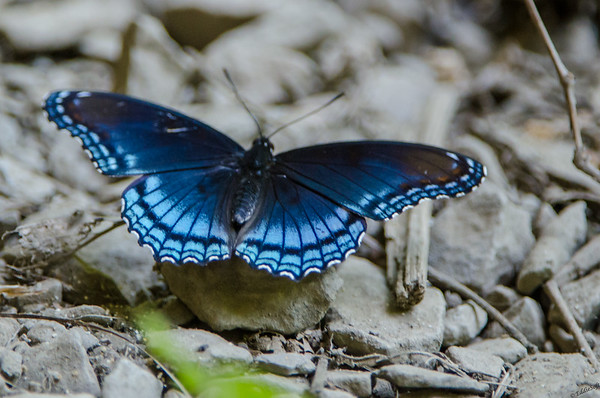 Similar reference shots indicated this was also a Red-Spotted Purple although it seems to only have faint orange spots on the wing tips. I really need to stick with birds. Turns out I came upon another specimen while at Chain O’ Lakes State Park back in July 2017. Same brilliant blue on the back half, but darker in the front half with better defined orange spots. This is crazy – if these are really the same, then they go through a similar color transformation as the European Starlings that start out the year in gorgeous feathering and sharp tips, but gradually dull over time. 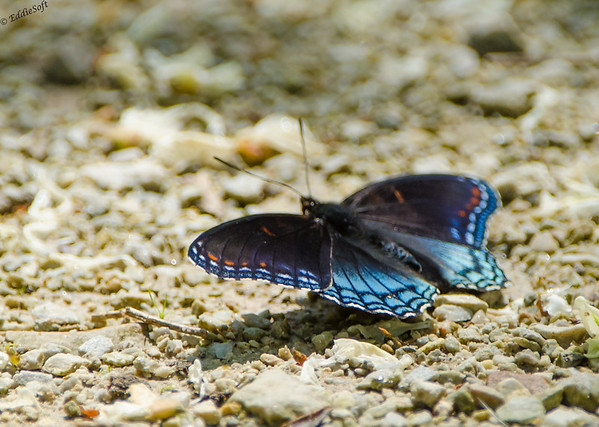 Finally got a decent shot with the wings up. Damn nature, you beautiful! 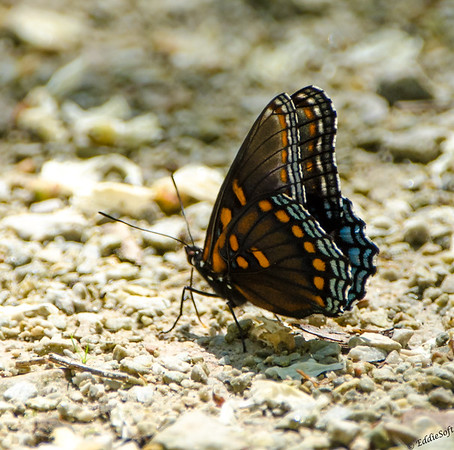 And now to close out the last of the Butterlike specimens in the queue. For all I know it is a Moth. Just happened to be one of the more crispy shots I have of these creatures and figured I’d throw it in. 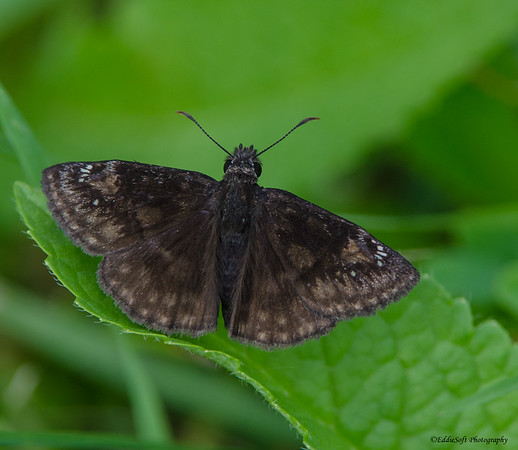 That’s it folks. Hope you enjoyed some shots of our more fragile winged creatures. Oh, and don’t forget to check out B’s site so you know what good pictures of Butters look like. Meanwhile, time to start checking off the honey do list. No excuses anymore now that I’m essentially forced to hang around the house.

6 thoughts on “Just Some Butters to Brighten Your Day”