I have always found units of measure to be the foundation for life. They have the unique ability to deliver a multitude of feelings. Used at the appropriate time they can bring happiness, yet can be used deviously to bring on depression. Similarly playing the fence to deliver a feeling of accomplishment while equally adept at demoralizing. Of course, there’s the inherent use to impress although quickly turned to deliver a sobering cold fish slap across the face. It might be hard to imagine a tiny 5 letter word like “units” having such an impact on our day to day activities. Perhaps you need some examples. Clearly it sounds a whole lot better to North American males to hear their average life expectancy is 27,740 days rather than a mere 76 years. Better yet, how about 665,760 hours – now we’re talking. Nothing like walking into work touting you’ve just completed a 50K only to have some snide remark like “well, that’s only around 30 miles” – bastard! Hey buddy, that’s 158,400 feet back at ya’. Everything equals out of course, as the consumption rates clearly differ, but the fact remains that numbers are a double edged dagger (keeping with the pointy things theme from last post). So, by now you are probably wondering where I’m heading with all this. Well, 1 year ago we came upon this interesting bird. 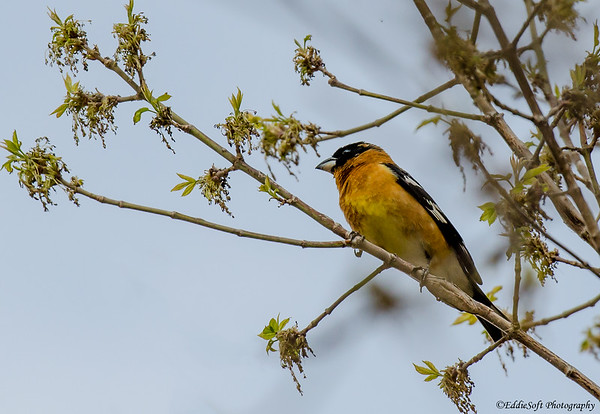 See, you are probably thinking to yourself, “man, Bri’s on his game for today’s post – so unlike him to deliver a snap to post execution in a single year. Way to go Bri!” (that would be both the feeling of accomplishment and impression if you are keeping score). Yep, this post was from 2013 and comes to us from Yellowstone National Park. Quick math, carry the 1, subtract the denominator, build a 3×3 matrix or whatever the crap they do in common core these days… wait a minute that is more than a year. Nope, one itty bitty cute and cuddly “dog” year. 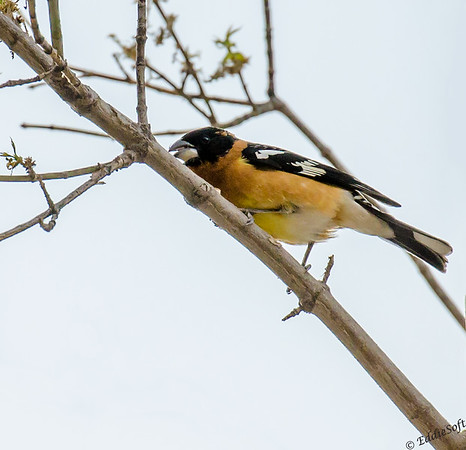 Hit the jump to find out what the latest add to the birding list is.

Or cool looking friend here comes as a bit of a surprise. I accidentally misplaced a large amount of images I had previously processed from that Yellowstone trip and few others during the course of that year. I process a large amount of pictures at a time – sometimes with focused sessions that can last a couple of weeks – when you are in the groove you stay with it. There was always that nagging feeling something was missing when I looked at my queue. While doing some cleanup on my drives they magically appeared buried in an unintended sub-directory. Both happiness and stressful feelings intermixed as I perused the directory’s contents. Elated what was lost was now found – but now my backlog was just massively inflated to the tune of over 2,100 fully processed pictures ready to be revealed to the world – I need and intern stat! 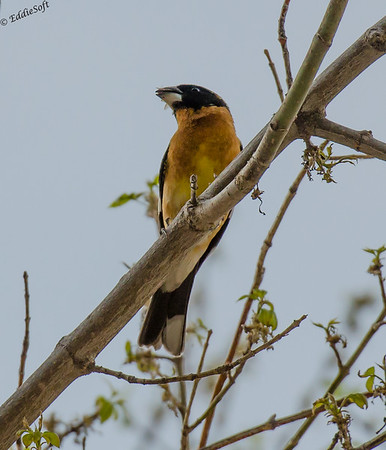 Staying on the bright side, you will be hearing from me a lot more than usual in the coming year. While glancing through the shots, I noticed this peculiar bird sporting the traditional colors of an Oriole. Hovered over it a bit trying to figure out what seemed strange about it. Decided to do a quick verification of the features, picture, reference site, picture, reference site, picture, reference site.. finally it clicked. That heavy bill was out of place. A few more web clicks confirmed this was not an Oriole, but a Grosbeak. A Black-Headed Grosbeak to be exact and more importantly a solid +1 on my birding list. No hesitation, need to get this one posted. Thanks to the Ron Who Owes Me Bigly event I have to squeeze out every new bird I possibly can. 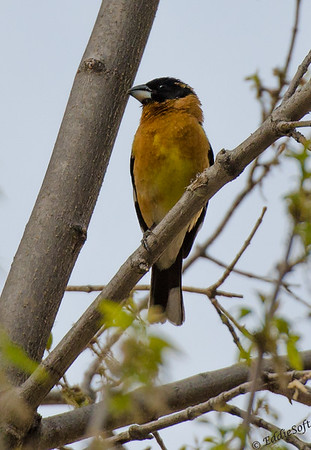 From a bird facts perspective, The Black-Headed prefers to hang out in the western half of the States and then down into Central America. The male takes a couple of years to get the full adult hooded breeding plumage for a couple of years. The specimen here is the male and the hood is somewhat in so guessing it is at least past the 2 year range. I know of at least one very knowledgeable Butterfly expert that probably already knows this, but just in case our Monarch’s possess a toxin to most birds – with beauty always comes a level of danger. The Black-Headed happens to be tolerant of that toxin – to a point. According to Cornell’s site, they space their consumption out up to 8 days to give their defenses time to purge the danger from their internals. For every defense, there is always someone or something that will find a way around. 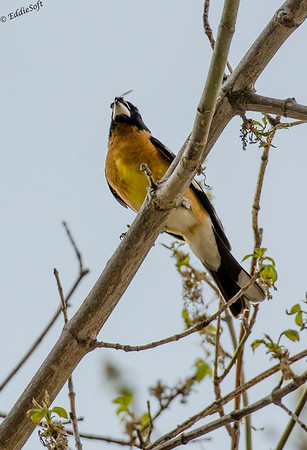 Thinking there were no dangers related to whatever insect this specimen had found – he was pretty proud of it and was showing it around to all his friends. Thankfully they were not Gulls or it would have been mobbed ha!

Going to leave it there for today. Sorry for the unrelated background ramble in this post. Then again, in the units theme it was only 6 small paragraphs (excluding this one) hehehe. Stay safe everyone and you might want to practice good hygiene for the next month or so as we try to get this virus isolated.

7 thoughts on “Yellow and Orange in Yellow”