Greetings my friends! Been a bit of time since my last post – well at least on the Wildlife side of Intrigued as I did take a cue from CJ and put a Hmmm post out (link here). I thought things would lighten up at the turn of the decade, but I find myself surprisingly busy. Some of that was due to a recent loss in the family as my Aunt is now once again united with my father. I did get an opportunity to catch up with the extended family and even had a chance to spend some quality birding time with Ron. He stayed overnight at my place on the trip back from the funeral allowing us to head down to Emiquon National Wildlife Refuge the next day. This netted Ron a +1 and a new birding experience – both of which I’ll let him feature on his blog (nudge, nudge). Maybe I’ll get around to those captures in say .. oh, I don’t know… let’s go crazy fast and say 2-3 years ha!

In the meantime, let’s travel back in time and see what’s moving on the Texas beaches. 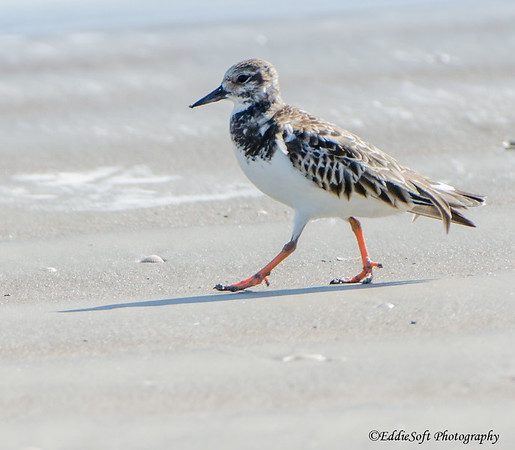 Well, lookie there Mr. Orange Legs strutting its stuff. This particular series comes to you from our January 2017 trip down to Galveston Island. The Ruddy Turnstone featured here was busy running up and down the shoreline trying to convert all that migration fat into a beach bod that drives the chicks wild. For those new to these creatures, they fatten up prior to heading out on their impressively long migration. They spend their breeding months in the arctic tundra and then gorge themselves before making the massive trek to the North and Central American coastlines. 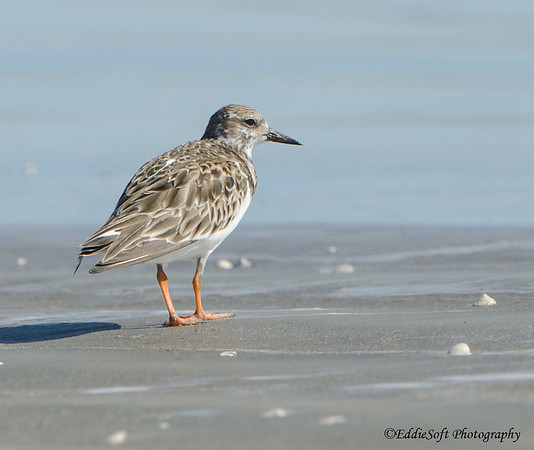 Hit the jump to learn more about this yo-yo diet bird.

Whatever doesn’t get consumed on their way down to the warmer climates has to be sweated off under heavy weights, painful core strengthening, bird yoga and their slimming secret weapon – stone turning. Them Turnstone babes like their mates fit to show off to the other peeps on the coastlines. Guessing this non-breeding adult – or possibly a juvenile if I could tell if its feather ends were more chestnut – was striking muscle poses between reps drawing appreciative squeaks from the onlookers sipping margaritas from their lounge chairs. 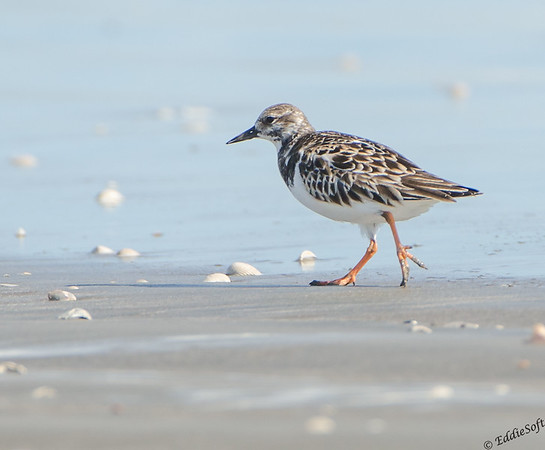 This isn’t the first time the Ruddy Turnstone has been featured here at Intrigued. In fact I posted on them about this same time back in 2017 (link here) and even later back in 2015 (link here). Each of those series featured the more distinctive calico plumage – which I personally happen to find gorgeous. Today’s specimen sports a more subdued coloring resulting from all the workout sweating. Regardless, you can pretty much pick these birds out of a large peep gathering from their orange legs (they do brighten during the breeding season). A godsend for us birders who have a hard enough time trying to ID the multitude of similar looking shorebirds. I am in the middle of a Cornell shorebird identification course Ron gifted me. Fingers crossed that will help out on the more difficult IDs. 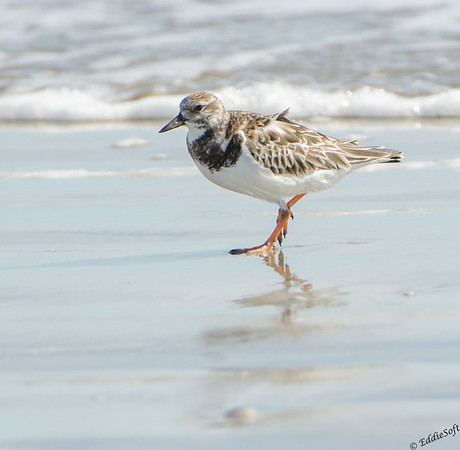 For some quick facts they do leverage their stout bills to overturn stones/shells etc. in search of tasty morsels (you thought I was joking earlier about that stone turning thing didn’t you ha). Cornell mentions their offspring have about 20 days to get comfortable with their wings and then immediately head out on a thousand mile endurance flight to their wintering grounds. A feat that puts us humans to shame as our babies are still mesmerized by the 5 giant suckers attached to the end of their foot. Then they have the nerve to grow up, buy expensive cameras and sit on the beach complaining because their subjects refuse to stand still for a mere 2 seconds so you can get a shot of them in the tin. 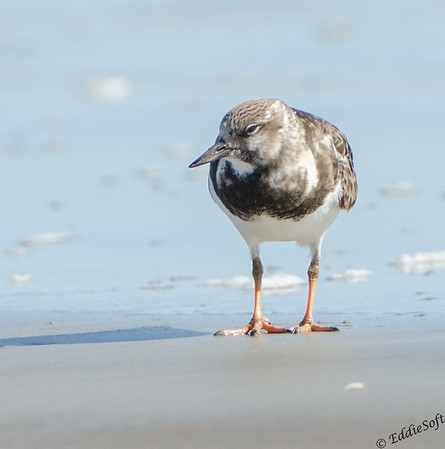 Apparently this didn’t go unnoticed per the shot above. Although my Ruddylish is a bit rusty, pretty sure he squeaked out “Hey you over there, Mr. overcompensating glass camera dude, you staring at my ladies !?!”, followed promptly by hurling a weight plate at my head. Wow, these Ruddy’s can get possessive.

Better leave it there. Probably need to think about heading out and plowing soon as the white fluffy stuff continues to fall.