Well, we just made our way back up to Minnesota for Linda’s three month Mayo follow up on her heart surgery.  Just need to make sure her upgrades are working as intended.  Unfortunately, looks like we will need to blow out of here as soon as possible as this place is planning to get 5-10 inches of the fluffy stuff  mixed with strong winds – starting just an hour or so after her last appointment.  Being Midwest natives, snow generally doesn’t get us too anxious – it’s the people that are not used to bad condition driving that breeds the concern.  On our way up we came upon an ominous scene as they were loading a body into the coroner’s vehicle on the side of the road.  According to the local Davenport news, the driver lost control exiting the highway – and that was on dry pavement.  No need to get too worried about things in the future – live in the now I say – and by now I mean showing off my latest +1 on the ol’ bird list.

If you spend any time at all at Intrigued you are fully aware that although I may live in the now in the real world, I actually live years in the past in the cyber world.  Not sure exactly when I lost control of my photography queue, but it is a constant reminder that pressing the little shutter button on the camera is the easy part.  Getting captures moved to long term storage, flipping through the haul to figure out which ones are actually worthy of touching up, toiling away in the digital darkroom, getting the images uploaded and then ….well, then the most fulfilling part, adding words and showing them off to the world.  (Note, Ron used to make fun of me for being so far behind .. until he starting wildlife blogging and is now in the exact same boat hehehe).  Then there are times like today’s featured bird that are fresh out of the tin from an encounter a mere 10 days ago.  Yes, that was days and not years. 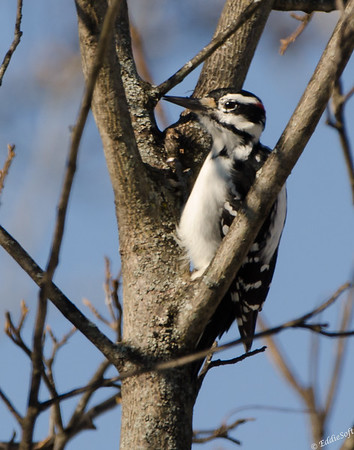 Hit the jump to learn more about this surprise encounter.

I’d like to embellish and tell you how I had to spend days using a machete to cut through the overgrowth of the Amazon forest while battling hordes of flying bloodsuckers and dodging Dendrobatidae poison dipped arrows of long lost tribes.  In truth, I was sitting at the kitchen table watching a Doe grazing on acorns when something caught my eye as it flew to a nearby tree.  Woodpeckers are quite abundant in our parts – Red-Headed, Red-Bellied, Downy, Sapsuckers, Flickers and an occasional Pileated will opt to stop in and pound a few more holes in our trees.  Very familiar with those species and able to categorize them quickly by coloring, shape and sometimes sound.  This new arrival didn’t trigger my internal ID decision tree.  Sure, it looked like a Downy from the overall coloring, but something didn’t seem right.  Black, check – white, check, tuft at base of bill – check, red adornment on back of head – check, long white patch on middle of back – check, checkered pattern on black wing feathers… yep, all there yet still didn’t seem right. 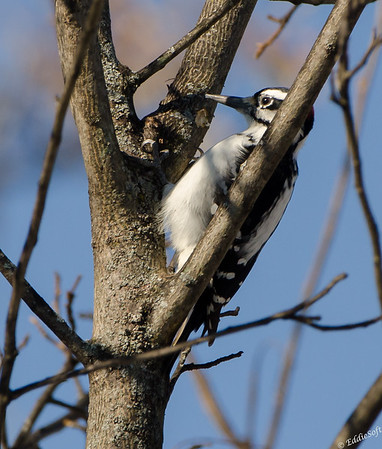 Then I saw this image through the large glass. 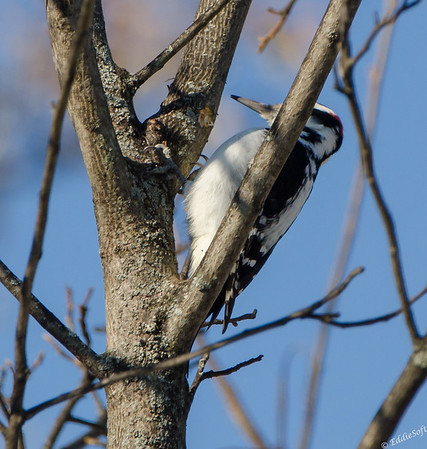 Probably thinking to yourself, what is so interesting about this crappy shot – it didn’t just break the rule about keeping the eye in focus .. it doesn’t even show the eye!  What it did do is eliminate distractions which immediately solved the mystery.  Although it looked like a Downy and walked like a Downy, this was no Downy.  The Downy has already been featured at Intrigued back in 2014(link here).  That species is small in stature coming in slightly bigger than the everyday Chickadees and Nuthatches that visit the feeders on a daily basis.  Overall size is always a difficult barometer if you don’t have the other species nearby to visually contrast.  This specimen seemed larger than my memory of the Downy.  The better indicator is if you can do relative sizing on the specimen itself.  The shot above highlighted a key feature – the ratio of the bill to the head.  This specimen had a beefy bill that was slightly shorter than the overall width of the head.  That was NOT a Downy!  Those smaller cousins have daintier bills that average about a third of the head width (which I contend is the reason those look so damn cute). The bill on this specimen looked like it could do some serious damage – translated .. not cute.

There was now a reason for the initial hesitation on the ID.  It appears that we have a Hairy Woodpecker in our midst.  Now time to start validating the other key features.  I have actually studied the Hairy  a lot so when I finally encountered one I would know how to confirm it.  The Downy has smallish dots in the white of the outer tail feathers where the Hairy is solid white.  It took a while to get a shot that would confirm that – see above.  Already mentioned the overall size being another indicator.  The Hairy is roughly the size of a Robin if you have a good feel for that stature.

The last indicator is a bit unconfirmed and may either be just a personal observation on a limited sample set (that being one) or a generalization based on my go-to reference site (Cornell) only having one reference picture that showed the full back of the male’s head.  Oh, for those not familiar with these Woodpeckers, the males have red feathering on the back of their heads.  In my shots you can clearly see the red feathering broken by a black line.  The shots above and below this paragraph show this feature pretty well.  All the pictures I can find of the Downy show an unbroken red bar.  Again, this may be an incorrect generalization so take it at face value until I can get you a better confirmation.

Oh, and I had to laugh when I saw this in the darkroom – since they can’t just head down to their local hardware store and pick up a small pair of safety glasses, they are smart enough to close their eyes when they are pounding away on a tree – don’t want to get a splinter in the eye. 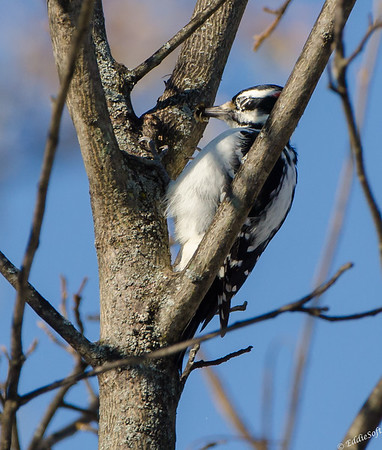 So there you have it, one of the easiest +1’s I have ever had the privilege of getting.  I’ll save the dodging of deadly arrows for when I go after an Oropendolas.  Now if somehow I could just coax an Albatross to fly over my backyard in Illinois – now that would be cool.  Linda is finishing up her appointments and we need to get on the road while we can still see out the windshield.  Stay warm everyone, the holiday season is upon us.