Greetings Intrigued fans. This was a pretty busy weekend as we headed up north for a little fun in the sun and, of course, a bit of agility dog showing. Linda decided she wanted to ignore the advice of her heart specialist and get a few agility runs in with Raven. He needed one more successful standard run to move to the next competition level. She promised to take it easy in the ring so I relented and agreed to it. Should probably mentioned she did bribe me with the opportunity to get some trail running training in (their trails were not flooded out like our local ones are) and the cherry on top, a day of birding with Ron and his wife. Raven ended up getting it done in the ring going 3 for 4 while Linda managed to keep her heart under control. I managed to get a solid 13 miles in putting me in good position for next week’s 15K considered Illinois’ toughest, but reminded me just how hard the 50K is going to be a few weeks later. Still a bit sore from yesterday’s run, was still able to get a solid day of birding in – think we came in at the high 30’s species mark for the day. Once all that was out of the way, we had to race home to watch the St Louis Blues try to claim the Stanley Cup. One frustrating element was the lack of Internet where we were camping arrrrrgggghhhh! Had plans to get caught up on my running post – nope. While sitting here watching the Blues (now down 2 goals) thought I’d jump on the computer and crank out a quick post.

It’s a bittersweet post today as this officially wraps up all the worthy shots from the Georgia birding trip back in May 2015. With all the bird shots out of the way, it is time to give some time those non-feathered creatures hanging out in the region. Before I begin though, if you are looking for good shots of dragons and butters you should leave this post immediately and head on over to see B’s work over at Butterflies to Dragsters (link here). I’m a bit embarrassed to even put these out after seeing his work behind the macro. So, if you are still here, let’s get to some non-birds shall we.

Hit the jump to see the last shots from the Georgia trip.

First off a brown and yellow Dragonfly. After hours of searching through Google and other online related resources, I’ve been able to deduce that this particular creature is called .. a brown and yellow Dragonfly. I am unable to find any good reference for this specimen. I went to Insect Identification’s website and struck out there. Tried doing some broad image searches and after going through hundreds of reference shots ended up getting the creeps thanks to intermixes of spiders, snakes and others that I can only describe as hellspawn. Eventually gave up – I shall call him Brownello (real names gladly accepted). UPDATE: Thanks to B, the Dragon expert from across the pond, I now have a proper name for the specimen above – although I like Brownello, it is actually a Brown Spiketail.  Big thanks for the assist!

This next one was a bit easier. 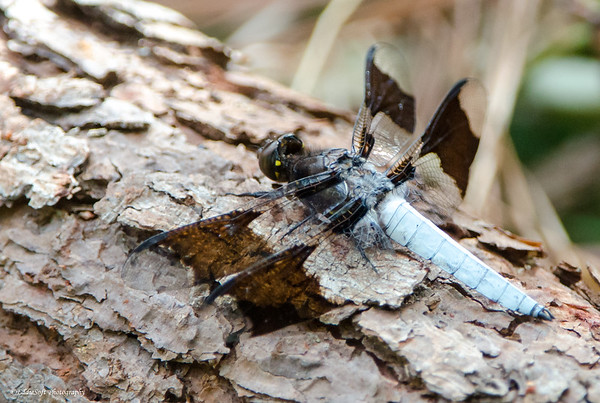 Believe the one above is a Common Whitetail Skimmer. I’ve featured other varieties of Skimmer previously (link here). This one has the brown spots further out than that other one. Definitely rather dull looking compared to the next specimen. Again, based on limited knowledge of these Dragons I am going with an Eastern Pondhawk. If nothing else, they are at least both green. 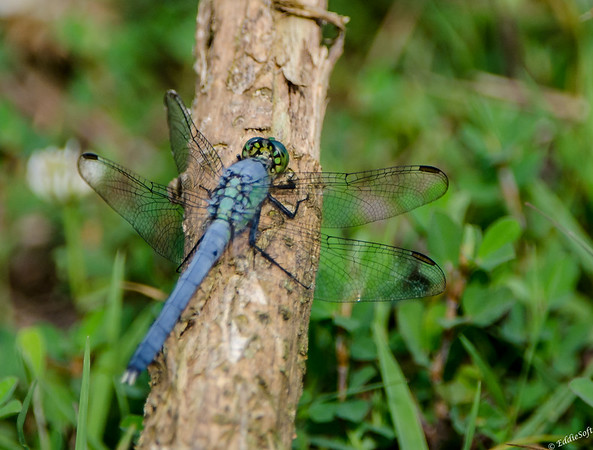 Okay, done with the Dragon related finds. Next up a pretty Butter. Admittedly soft on the capture – not to make excuses, but the big glass doesn’t lend itself to these small insects. I’ve developed a feel for bird behavior that allows me to better predict their movements and anticipate where to focus the glass. This small world is way too unpredictable for me and often find myself watching a tennis match as I swing the glass all over the place trying to get something in the tin. 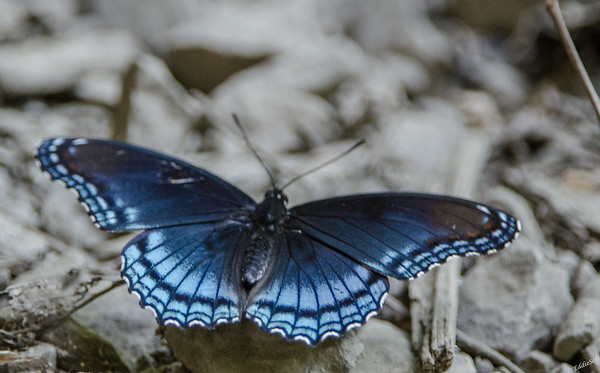 This Butter gave me a couple of seconds to get something in the tin. A stunning shade of blue on the top of the wings and then orangish highlights below.

Thinking this specimen may be a Red-Spotted Purple which apparently has another name, the White Admiral. No idea where the “red” comes into that equation but a pretty bird even with a rather soft shot.

Next up, snakes with legs as my wife refers to them as.

Going with a Six-Lined Racerunner for this identification. These little guys (or gals I guess) were all over the place down there – according to Wikepedia, they roam throughout the southeastern region of the US. 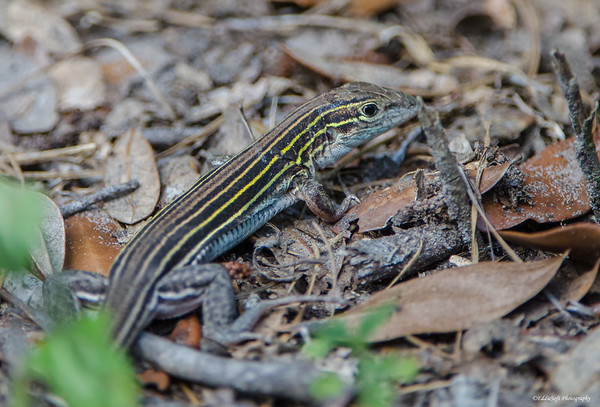 Adding in this next shot since it looked unique compared to the other Lizards that were inhabiting the Georgia Swamps. A quick search resulted in what appears to be a fairly accurate ID – the Broadheaded Skink. One of the largest Skinks in the area. Only the mature males develop the large red hued head distinctive to this species. 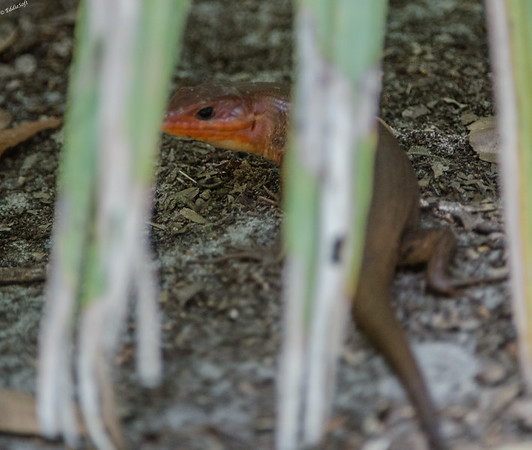 Should probably give Linda a cue she can start reading the post again – she really really really really hates anything that even resembles a snake. Ironic in that we live in the woods, but I’ve successfully convinced her that all of the slithering demons in the area have been relocated (shhhhh).

Stumbled on this intriguing scene while on the hunt for a Red-Cockaded Woodpecker. Obviously I didn’t find one or I wouldn’t be taking pictures of webs on the ground ha.

Decided to hang around there a bit and see what might have produced such a structure. Wasn’t sure if they were even in those parts, but I had never seen a Tarantula in the wild and this seemed like a possibility to my untrained eye. Was surprised what ended up coming out of the hole.

Not a Tarantula. Believe this to be a Wolf Spider or as they call them in my parts of the woods, Timber Spiders. Definitely an intimidating Spider in themselves as they can grow to be quite large. Very common visitors to my porch during summer months drawn by the smorgasbord of appetizers brought out of the woods from the house lights. Took a picture of one about 3.5 inches in length from front legs to back legs the other day. Thankfully these spiders have never shown any aggression towards me and have always let me take as much time as I want to photograph them. No different with this specimen as it just sat there and looked menacing for the camera. Note, based on some quick research, there were multiple claims that Wolf Spiders do not spin webs. This seemed to counter that argument – either my ID is wrong (could be a variation) or they are evolving hehehe.

While trying to take pictures of our dogs next to some cool looking Georgia trees, I noticed something moving around in the area. Didn’t think much of it until the dogs became agitated. Eventually they ignored any attempt to get them posed and focused their attention on their surroundings which by now had more movement than initially assessed. With the added attention, finally realized that there were crab creatures everywhere – flying in and out of holes in the sand and a number of them crawling on the tree trunks. I was no longer upset with the dogs – no way I’d want to sit anywhere near these bug-eyed crustaceans. 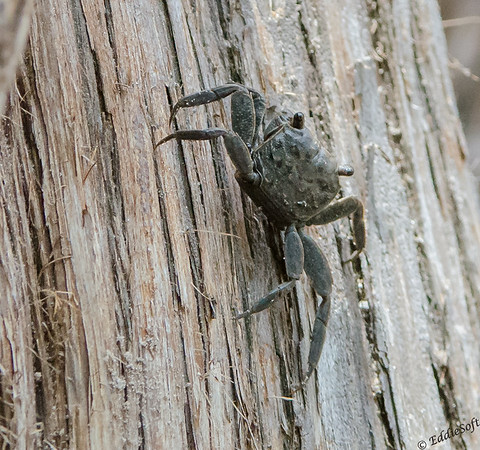 The part that drove me nuts wasn’t the encounter, rather trying to figure out what they were. After search after search trying keyword after keyword (Georgia, crab, sand, etc.) the only thing that seemed to fit was the Mud Fiddler Crab. The region seemed to fit, a few shots appeared to match and complete lack of anything else that seemed to fit left me with the one option. If there are any Crab experts out there, please chime in – and I thought ID’ing Sparrows was bad.

Well, the Blues managed to get embarrassed tonight. One more game, but this definitely puts the momentum back in Boston’s ice. Get it done Blues. Goodbye Georgia.