I feel like I’m dragging on my production this month. Then again, that may be more of a fact than a “feeling”. Part of the reason for that is I am literally feeling drained thanks to a new endeavor I recently signed up for. Ever get in a rut with a hobby/pastime where that once enjoyable activity kind of loses a bit of its luster? Maybe it requires a tremendous amount of training just to be able to enjoy that moment in time, but now that training becomes more like work than the once buildup of excitement it brought when you were first starting on that journey. This is where I was starting to get with my running. The long training outings didn’t seem that bad thanks to being able to spend a few hours conversing with my fellow training buddies. Unfortunately, both of my partners in pain are out recovering from injuries making the long runs seem like.. well looong runs. Thought it was time to try something different – maybe get that spark back. Thanks to conversations with some co-workers, went ahead and committed to this “new” experience. I am going to leave the details until after next weekend (when the event occurs) in case it goes horribly wrong. What I can say, after two training sessions, it is much harder than I realized yet everyone that I encounter must be wondering why there is such a big smile on my face behind all that sweat. I can’t wait to see how this new experience turns out – wish me luck!

Looking back, that is one hell of a lead in to simply set the stage that I am sitting here relaxing in my den while relishing the aches in my legs – can’t think of a better time to knock out a post on another new bird on my list. Pop quiz… where did Brian find this feathered specimen…

UPDATE: Turns out I already featured this Warbler from my Georgia trip – apparently forgot to check it off my list: That first encounter is actually here. 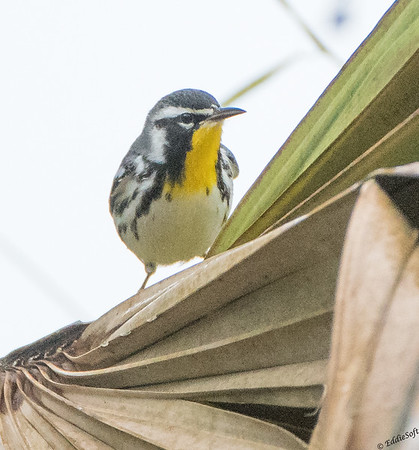 I’m just going to go ahead and assume that Texas was bouncing around your cranium long before you got through that sentence. Yes, this is another new check from our birding trip to the Gulf Coast and along the Rio Grande Valley region back in December 2017. More specifically, this Yellow-Throated Warbler was spotted at Sabal Palm Sanctuary on New Year’s Eve. I posted previously on the surreal experience while visiting this sanctuary (link here). Still gives me an uncomfortable feeling when I recall it due to being the ONLY ones there. Definitely worth it though, since two new species made it onto my list – the Ladder-Backed Woodpecker and this much smaller warbler.

Hit the jump to see the only other image that made it into the tin.

Unlike the Woodpecker, this colorful bird didn’t stick around very long. By the time I realized where the song was coming from and got the barrel of The Beast on center, there was only time to get three shots of it (the third looked like a grey and yellow lint ball with feet thanks to its ejection seat escape mechanism). Owing to the less than stellar shots, it was overcast that day and my camera was set for the thick underbrush which ended up a bit slow for the lighter background – no sugar-coating, I failed to execute. Truthfully, was shocked you could even tell it was a bird -ha 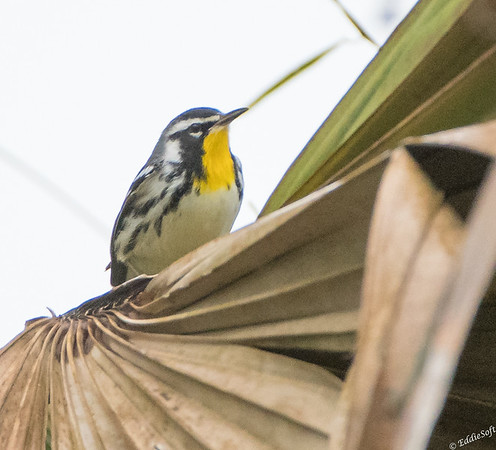 Let’s see what I can leave you with regarding this new Warbler. First off, this particular Warbler hangs out primarily in the Easter half of the US during breeding season and does some winters along Gulf Coast from Florida/Keys down through the Texas coastline into the Central America. I was shocked to see it so prevalent in my neck of the woods being that I had to travel all the way down to the Rio Grande Valley to experience my first one. Unlike many Warblers, this species tends to hang around the US year round rather than jumping too far into South America (again, unable to verify this with my own experiences because they possess one of those Predator like cloaking devices that allows them to pass by incognito whenever I’m out in the field. You cannot see it in these shots, but their left leg has a small mechanical device attached to it that receives Brian Alerts whenever I get in their vicinity. Ring, Ring Ring – sorry folks, my fact checkers have just called to tell me they are checking the accuracy of the last couple of sentences. Lastly, looks like I should be glad to even get a clear shot of this one – they are canopy top dwellers, however, do drop down during the wintering and migration months – you know now that this is only half true, they simply do not bother to use their cloaking device when hanging out at the top hehehehe.

That’s all I have for you tonight. The Aleve is finally kicking in so I’m off to get some shut-eye. Thanks for stopping by – see you again real soon now.

2 thoughts on “A Flash of Yellow”