I just want to say for the record that I am currently camping at Purina Farms down in St. Louis and freezing my butt off.  Last time I stepped outside it was dipping below 30 and there were little white flecks hurling down on us from above.  Linda is in complete denial and not exactly pleased we are being treated with this weather during the Poodle Club of America Nationals we are entered in.  Raven will be competing with the big boys and girls in the agility ring (wish him luck!).  With that cold whine out of the way, let’s get on to this weekend’s theme.  Wait – make that themes.  Carrying over from last post, bringing you another bird post, another plus one on the bird list, shoots from this very month (a miracle) and yes, another set of soft pictures.  I purposely went with the Woodcock shots first in hopes those shots would make these look better than they really are. 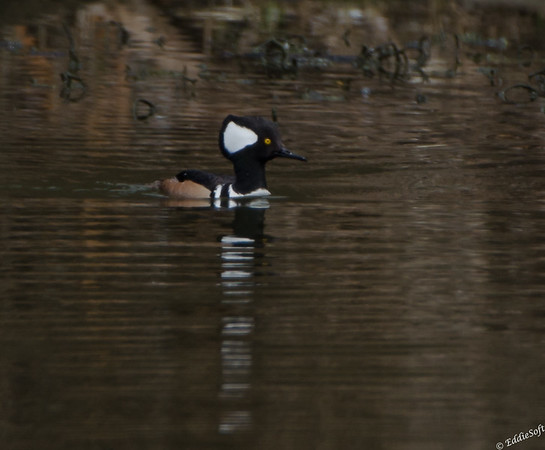 I mentioned in a previous post I was heading up to the Joliet IL area to do some birding with my brother Ron (link here).  The goal of that trip was to finally get that Ross’ Goose in the tin.  It had been hanging out with a bunch of Domestic Geese that had taken up residence in the area.  More specifically in Wilmington IL  Ron was threatening to drive there, scoop it up in the car and drive down to my house to get the picture if I waited any longer.  Note, that was only threatened, he didn’t actually do that … this time ha.   Turns out, our little white Goose was nowhere to be found.  We did locate the resident Geese behind Nelly’s Restaurant, but their little friend was either staying inside thanks to another cold weekend or it figured out it was hanging with the wrong crowd.  The day was still young, so Ron offered to show me some of other birding spots in the area. 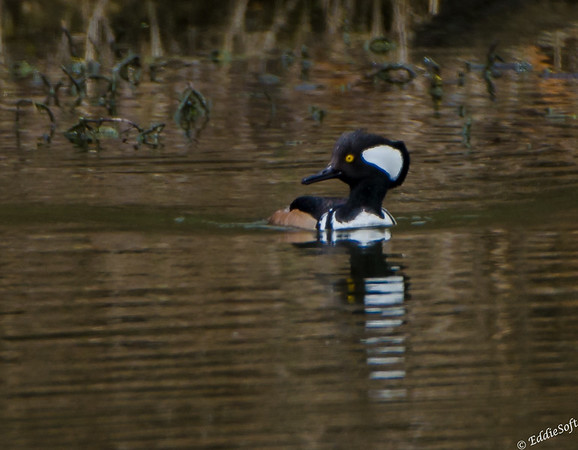 Hit the jump to see a few more shots of this distinctive duck.

The first place we went to was the Widewaters pull-off area along Front Street.  Note, don’t miss that turn off or you will be backtracking for what seems like forever.  As soon as we stopped, we spotted a Hooded Merganser slowly paddling in the water straight out from the truck.  I didn’t want to believe it at first because this particular bird has been on my top ten list for multiple years.  I’ve see web posting on sightings all the time – began to think it was just a cruel joke and the bird didn’t actually exist.  What was staring at me certainly had the signature markings of this nemesis duck – problem was it was too close. 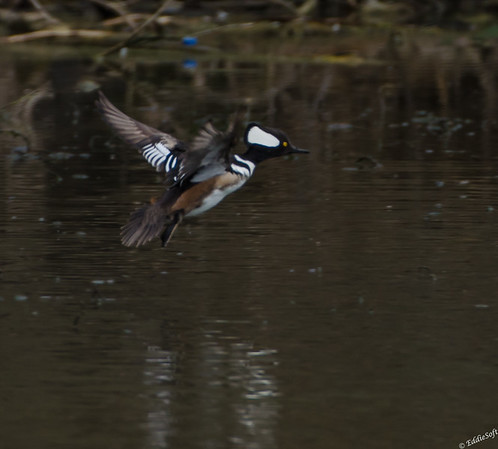 As soon as we stepped out of the truck, Mr. Hoodie became anxious and started paddling away.  By the time I got The Beast on target it was drifting into dark waters thanks to a heavy tree line at the bank and the gray sky overhead (yes, another cold damp April weekend).  Guessing we were being thwarted by heavy heat thermals coming off the water because neither Ron or I could get our Nikons to focus properly.  All our shots were coming out soft even when pushing the manual settings to try and compensate for the grey environment.  About 5 shots is all I could tin before the Hoodie took off for more private waters at the other end of the pond.  A quick walk towards that area proved fruitless beyond the heavy gathering of Shovelers, a couple of Ring-Necks and a few Gadwells hanging out at that end.  The drab coloring on those last two species making for difficult shots with the dreary day.

We ended up driving further up the road to see if that happened to hold better spoils.  Nope!  Lucked out again on our way back.     Another Hooded Merganser couple were spotted directly across the road where we spotted the other one.  Much like the first one, our presence was met with some concern and they slowly started paddling further away from the shore.  At least I was able to get a few shots of the female to go along with the male.  This particular male went a little heavy on the hair gel that morning keeping that distinctive crest slicked back.  The female did have her’s puffed up – definitely not as colorful.  After racking up a pretty good count on the shutter, we headed off to the Four Rivers Environment Education Center in Channahon, IL  There we spotted our THIRD sighting of Hooded Mergansers that day.  Clearly someone was making up for denying us the Ross – ha.

This couple was hanging out a good distance from the river bank.  Didn’t really think there would be any worthwhile shots – if it was a struggle to get decent shots in the tin when they were closer, doubling that distance in choppy water wasn’t going to go well either.  For the most part that was an accurate assessment at least for the floating shots.  The female eventually decided the mall was closing soon and high tailed it down the river with the male close behind.  That brought them on nearer trajectory allowing for a quick burst of final shots.

The flight posture also brought a full shot of the hood. Almost looks like a Ying and Yang symbol from this angle (or Yang and the Um from all those years I spent in the Korean arts) .  Ironic since that perfectly reflected the day – the good of the first Hoodie sightings with the bad of the poor shooting conditions.  I haven’t seen Ron’s shots yet.  Hoping he did better than I did although I can’t complain too much – they are at least good enough to tell the distinguishing marks and thus sufficient for me to get the official check

Since this is a new bird to the blog, how about we take a quick look for some interesting facts to share.  Ugh, turns out these uniquely feathered ducks practice brood parasitism – the act of laying their eggs in the nest of others.  Just like those damn Cowbirds who are on my top ten disliked birds for the very same reason.  Wow, did not know Wood Ducks do the very same thing – bad ducks, veerrrry badddddd ducks.  Unlike the Cowbirds, the Hoodies lay their eggs in the nests of other Hoodies so at least the victims don’t need to spend the rest of their marriage trying to explain why their offspring look like the UPS man.   Another new tidbit is the Hoodie actually hunt underwater by sight.  They have the ability to use eye refraction to improve their vision under the water and possess a nictitating membrane – a transparent extra eyelid that acts as a pair of water goggles.

Like the Hoodies above, time to make my exit.  Hope you enjoyed reading about my latest addition to the birding checklist.  Wait, I just remembered another theme from last post – this was another bird that Ron had and I didn’t hehehehe.

Stay warm everyone and remember in those immortal words of N.W.A – The boyz in the hood are always hard… to get in the tin