Just got back from a photography seminar by Ian Plant (link here). For the last three years, Linda and I have been going to the Peoria Camera Club featured photography speakers. The first two had speakers we were very familiar with, however, Ian was new to us and we did not know what to expect. There was some hesitation this year due to the fact that the $75/person fee is a pretty steep if you are unsure if you are going to get any takeaways for the investment. We checked out his site and his work was very interesting – he also ranged from landscape to wildlife which covered both our interests. Being that it was our little thing we do together, we took a chance. We definitely didn’t expect the 9+ inches of snow accumulation that started late last night and has continued throughout the day. This kept a lot of planned attendees home – living in the country we are accustomed to the slippery driving conditions and made it there without incident (can’t say the same for all the trucks and cars we passed in the ditches on our way there). Turned out we had a great time and have new ideas to try out next time we are in the field. Also had a chance to mingle with some of the Peoria Camera Club members which was fun as well.

Having been inspired by Ian today, thought I’d go ahead and put out another post. 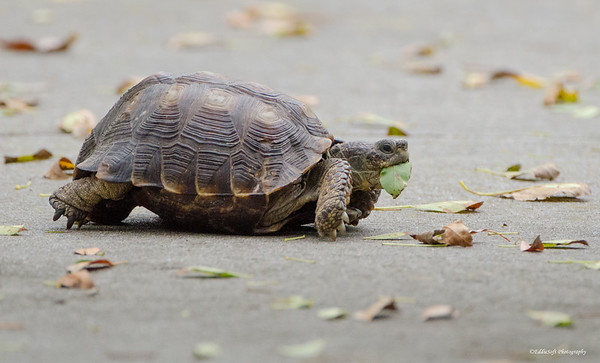 Nope, that isn’t a bird for a change! Based on the multitude of hate mail sacks that hit our front door, it was apparent that you wanted a break from the birds. After a quick look through my queue, I found this prehistoric throwback and thought it would fit the bill. Granted, I did come upon this slow moving creature in the midst of birding Laguna Atascosa National Wildlife Refuge on our Texas birding trip back in January 2017. This would have been our first visit to the Sticky Mud Lagoon (in case you were wondering what Atascosa means), quickly making its way into my top 10 birding locations. Just be sure and keep a close eye on the road into that place or plan a visit to your favorite tire alignment technician. Actually, let’s call it a giant pothole that leads into the park that happens to have some high gravel parts in it. 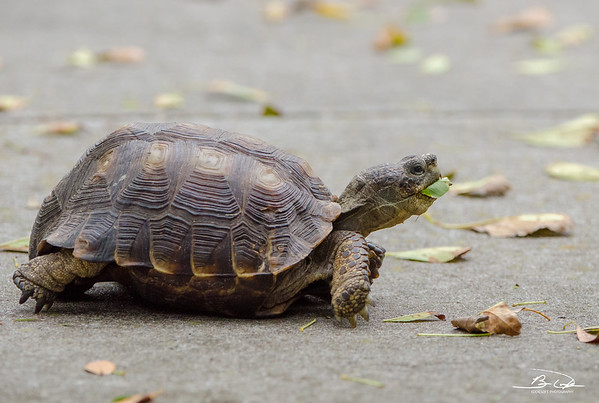 Hit the jump to read more about this featured creature!

Now, beyond birds, Laguna is probably best known for their sightings of Ocelots. Their website claims there are 50 Ocelots that hang out in the US and a breeding population resides in the refuge. Needless to say, I was uber excited to be able to get one of these small leopards into the tin. I should have read up on them a bit more. First of all, they are nocturnal and based on what I can tell from the rangers and other material in the visitor center – they haven’t been seen in a while. They did have a field cam shot of one in the center, but it didn’t seem to have a date on it. Oh well, I still kept an eye out for one just in case one had problem sleeping and went out for a daycap. 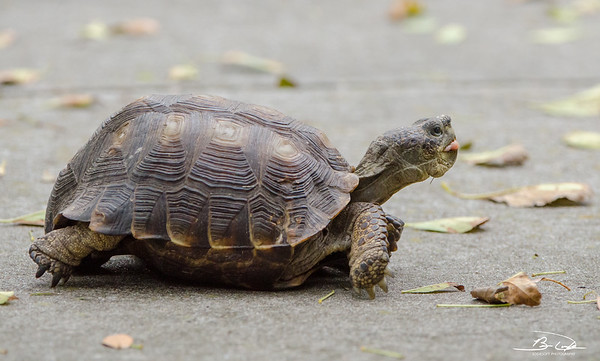 Although not a fur covered animal, this Texas Tortoise was a cool find. Since it is resting on pavement, an elaborate story about tracking it through the underbrush for hours isn’t going to fly. Even the Tortoise stuck his tongue out at that idea (see above). Reality is this epitome of a “life less hectic” was standing in the middle of the walkways slowly chomping on leaves. It didn’t even care there were others in his vicinity – even one carrying large glass! It would chomp away at a leaf, eventually finish it off and move the few inches it took to get to the next leaf. Chomp chomp, nom nom, crawl crawl repeat. At one point considered picking it up and moving it off the highly trafficked walkway. Then it showed me its choppers – second thought, no reason to risk losing fingers a SECOND time (link here).

Good thing I didn’t touch it – when reading up on this post, learned that these are protected species in Texas. Hands off these creatures! Oddly enough, Wikipedia has it listed as Least Concern. That might be as a whole, but Texas has it listed as Threatened. Tough to find many details about this hard shelled animal. They do not have webbed feet and they are apparently pretty bad at digging burrows. They will simply scratch at the ground with their claws to make an impression in the dirt on which to lay their eggs – typically in the 2-3 clutch size range. Their shell tends to grow to 8-81/2 inch range making this one near the full mature size.

That pretty much sums it up. When we returned later in the visit, it was no longer on the path and wasn’t spotted in the brush alongside the concrete. The undergrowth is thick there lending little likelihood to spot it once it made it past the cutback. Definitely enjoyed our brief time together. Hope you enjoyed the break from feathers (don’t get too used to it, there are plenty of those on their way ha).