Greetings everyone. My apologies for lack of productivity as of late. Wait, I should clarify that a bit .. for my lack of productivity in getting posts out. Thanks to an upcoming commitment, my post counts were significantly elevated in support of that endeavor. Unfortunately, my fairly ample runway of time was gobbled up by some form of rift in the space time continuum. There is no other explanation – one minute there’s like 3 months to go, then there was a small but finely tuned wind storm that ripped the pages right off my calendar. This forced a transition from prep phase to the produce phase and now pretty much in the polish phases. Can’t wait to find out how all this turns out, but you will assuredly be reading about it here…soon. Rather than leave everyone hanging a little over a week, thought I’d treat you to some finds on our recent trip to the Texas Gulf Coast. 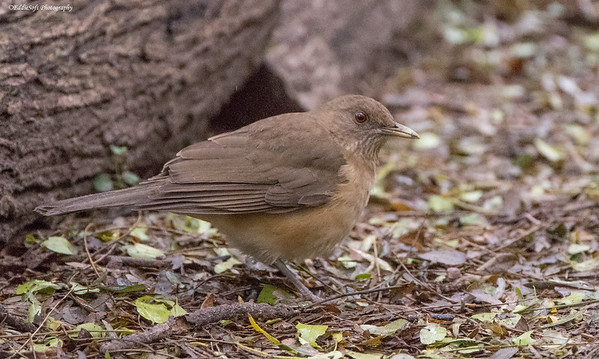 If there is one thing that is prevalent when birding the Gulf Coast and southern most tip regions of Texas its colorful birds. So stunning that many even passed Linda’s high “pretty” threshold that has to be met before she will even bother taking a picture of a bird. This rather drab looking specimen before you doesn’t come close to those other coastal finds (like here and here). That doesn’t mean it isn’t something I’m super excited to now have on my birding list! 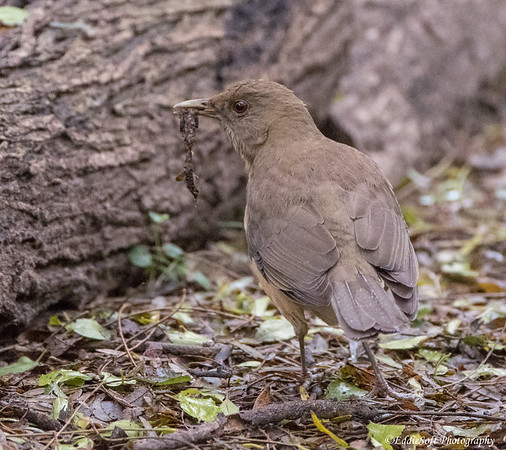 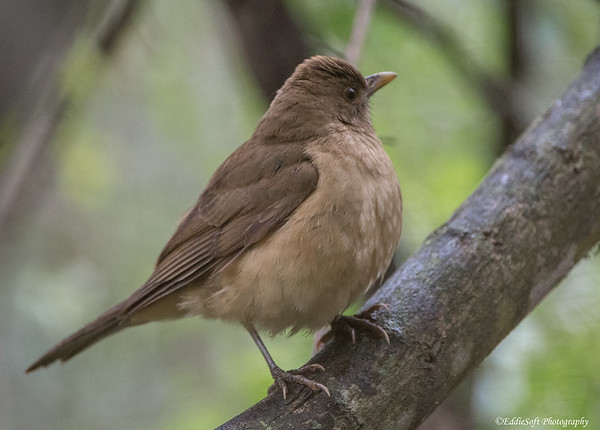 Just got a call from my fact checking department. It seems Yigüirro is NOT named after a Japanese anime series, but rather this is the name given to this bird by the residents of Costa Rica.. Yigüirro was named the national bird of Costa Rica in January of 1977 in recognition of its commonality in the region and the locals being impressed with its very melodic song. If you made the assumption that if it is common in Costa Rica, it might not be that common in the US, then you deserve to go to the head of the class. This Thrush only comes up to the southern tip of Texas. When researching the possible targets for our latest trip, this particular bird was one of my top 10 bird targets. Admittedly, I was not aware of how small this bird roamed at the time. Best part … not one Ron is going to be able to drive up to and add to his list allowing me to cut the gap a bit (Note, Ron continues to question whether these southern tip birds should really be countable under the argument they are really just visitors from South American and not truly “North” American birds. – nice try, but the policy board has flatly dismissed this position – sorry). 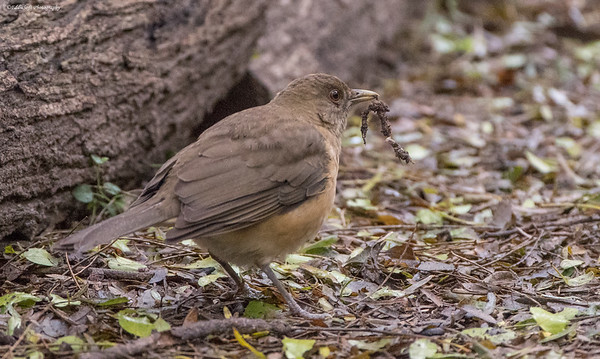 Might be wondering where I found this family member of the Robin. Thanks to a very nice book – Birding Trails Texas Gulf Coast by Jim Foster – we found this strangely tucked away gem called The Valley Nature Birding Center. This site sits in Weslaco Texas right in the middle of town. We were not even sure we were at the right place since it looked like a neighborhood park. Linda opted to stay in the RV while I went to check it out. Probably close to 1.5 to 2 hours later I came out with a big smile on my face. I’ll provide more details on this center in the future while introducing other finds from there. 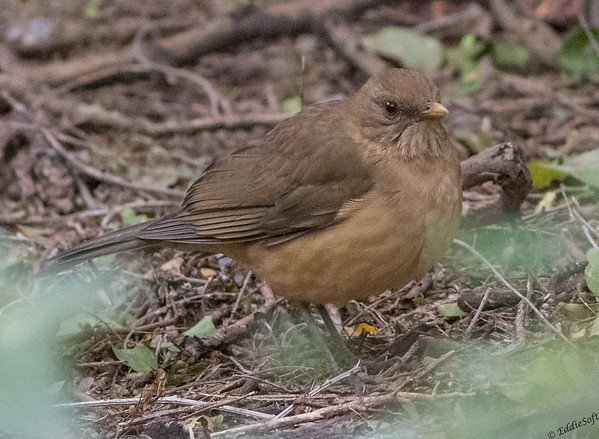 I opted to keep this picture in even though the leaves in the foreground came into play too much. The reason I left it was this angle shows the yellow bill characteristic. This was a bit lost in the other pictures because they had to be pulled out some very dark exposures. This specimen refused to come out from under the dark undercover – true to the Thrush family. One interesting fact is these birds will find Army Ant columns and prey on anything stirred up as a result of their march. That must suck, escape a horde of Ants only to be eaten by a Bird.

Need to put a wrap on this post. Hope you enjoyed reading about my latest +1 to the list. Also might be one of the quickest trip to tin to post cycles in a while. Thought I was spoiling you with the recent posts that were only a year old, ha!

3 thoughts on “Yigüirro in Weslaco”