Had a bit of a scare last night. I had just started into a training run on the treadmill – weather has not been conducive to outside runs as of late either due to a deluge of the fluffy stuff or dangerous single to subzero temps. Trust me, if I could run outside, I would, rather that subject myself to the modern day torture machine my fellow runners and I refer to as the killmill. Less than 2 tenths into the planned 7 mile run a sharp stab hit me just below the ankle nearly throwing me off the deck. Managed to stick an ugly landing that brought me to my knees. Tried rubbing and stretching it, but the foot was locked up and wouldn’t hold weight. Had to call it for the night and thinking it might be a stress fracture. Found out from the chiro today, likely not a fracture but had dislocated a bone in the area – that was snapped back into place (that was near equal to the pain of when it happened). Foot moving now – gonna wait for a couple of days before pushing it again. Thought I would get a quick post out there before applying some ice.

Today’s featured feathered species is one I had to go all the way to the southern tip of Texas to get. 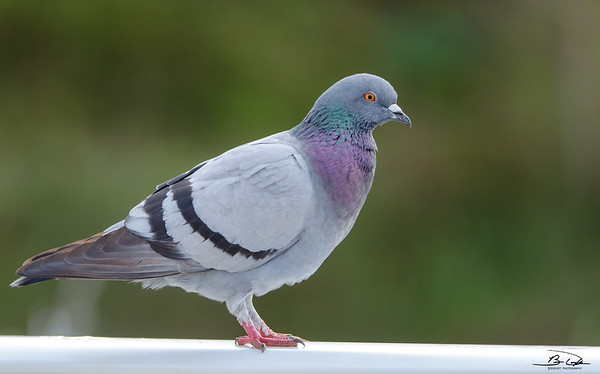 On second thought, I guess technically I didn’t need to go all the way to Texas for this one. Nope, I could have simply walked a quarter mile down our road and snapped one hanging out on some nearby power lines. You know what I say, why do something in the cold when you can simply drive for two days and do the exact same thing, but in warmer weather. The region map for this species looks like someone grabbed a can of purple paint and just threw it on the US and let it drain all the way down to the tip of South America. It also includes a line up to Alaska so our isolated friends to the northwest get to experience them as well. Problem is, they are not really a prized bird, unless you are historically bad at Roshambo and need a confidence builder – these birds absolutely suck at it opting to pick Rock nearly 100% of the time. (in a rare move, they’ll through a Spock out thinking they’re playing the expanded game developed by Sheldon). It is actually their stubbornness in always throwing rock that has given this species their name – Rock Pigeon (you can even the one below this about to clinch those talons and do it again – never ever learn – Paper .. you lose). 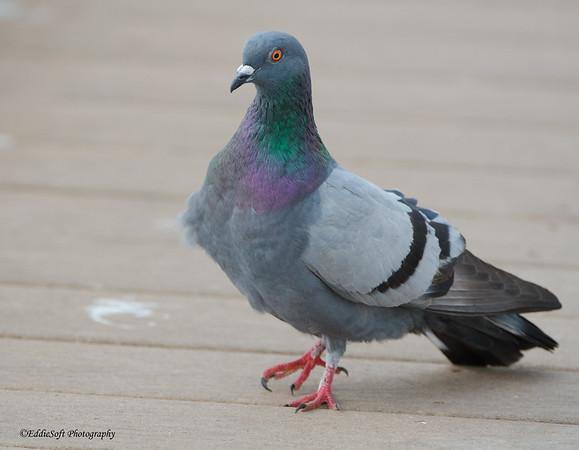 This particular Rock Pigeon was spotted at the South Padre Island Bird Viewing and Nature Center. “Spotted” in this context being it walked down the railing toward me until it was less than a foot away promptly challenging me to a game of claw wits. It couldn’t match my $10 bet so I declined – not going to take the risk of humiliating myself to a Pigeon without some skin in the game. I did take the opportunity to create some distance between us in order to get a picture. I had The Beast out there and that was waaaaaay to close for me to focus. Laughing at how long it has taken to get this fairly common bird in the tin, grabbed a few shots before it headed off to find a more willing challenger. 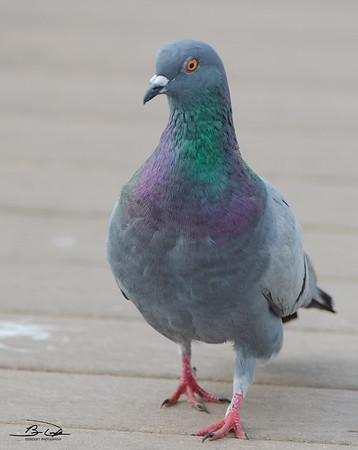 As far as facts go, Pigeons are well known for the ability to find their homes – some say through magnetic fields along with senses and sun positioning. Must be a handy talent after a night of drinking at the local bar. Cornell mentions these Rock Pigeons carried messages during the first and second World Wars. I was not aware that the various variations of their coloring are given names – the blueish-gray version with the two black bars shown here is referred to as the blue-bar variety – will have to keep a look out for the other patterns (one is rusty red, some have spots, others solid and then there are splotched, mostly red and mostly white etc.). I was always under the impression these birds carried some pretty nasty diseases, but unable to confirm that on the Cornell’s site. Wikipedia did have a blurb about them harboring a diverse parasite fauna (which they started to name causing me to quickly go for the back button before getting the crawlies.

That’s all I have for you tonight. Definitely not a rare bird by any means, but happy to finally be able to officially add the +1 to my list.

One thought on “Pigeon Paper Scissors”