I received an email from my brother Ron yesterday regarding an email highlighting a Harris’s Sparrow that was spotted at the Crabtree Nature Center.  It was recommended by the originator of the email to avoid scaring it away by standing INSIDE the WARM nature center and looking at the FEEDERS through window (my emphasis).  This, of course was met with great joy and in fact it was actually referred to as “Perfect” by Ron. This brought a big sigh from me when I read it.  I think we need a collective vote on this.  Should we add a new birding rule that disqualifies birds taken through a window at a nature center!?!  Please leave your votes in the comments and I’ll tally them up and make an official ruling.  In stark contrast, today’s post is featuring a bird that required me to drive out in the middle of the tundra, get out in single digit, wind howling weather and risk frostbite on the shutter finger to add this fine specimen to my North American Bird Life List. 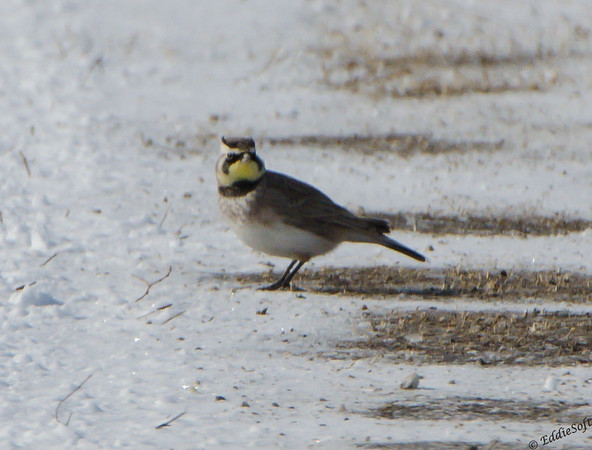 Well, it might not have been the Tundra, but it was a single digit temperature day in the snowy countryside north of Galesburg, IL.  Oh, and I might not have been driving and I might have shot the bird from the car, but the window was down and it was still damn cold.  Ron’s email actually reminded me I could bird from the warmth of my house too – I have such a backlog of shoots I simply went back to February, 2014 and went virtually birding through my queue.  Linda and I were out that particular day hunting down a Snowy Owl (link here).  That was one awesome Valentine’s gift from my wife!  I wonder if Ron has a Snowy Owl yet… guessing not since that would require going out in the cold (ha).  I had already processed the Owl pictures, but remembered taking a few shots of a group of birds hanging out in the country roads.  It was  overlooked at the time due to the excitement of the Snowy.  During my formal pass through the pictures (yes, I’m finally up to February of 2014) the unique horns and coloring of those birds caught my attention.  Those feather horns make for an easy identification – I had a Horned Lark in the tin!   Sorry, let me restate – I had a +1 Horned Lark already in the tin!  How cool is that!?! 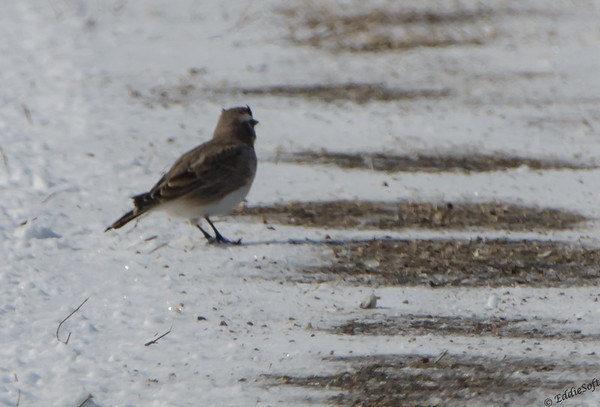 Admittedly, these are not the crispiest shot in my collection.  This is likely due to already having frostbite on my shutter finger from tracking that Snowy in 2.5 feet of snow.  The first shot is clearly the best of the three, but I included the shot from the back (above) and the shot from the side (below).  I like to give my readers a good perspective of the featured bird to provide people a better feel for each bird’s characteristics and help in the ID process.  Due to the very unique horn like features of this specimen the ID was a no brainer. 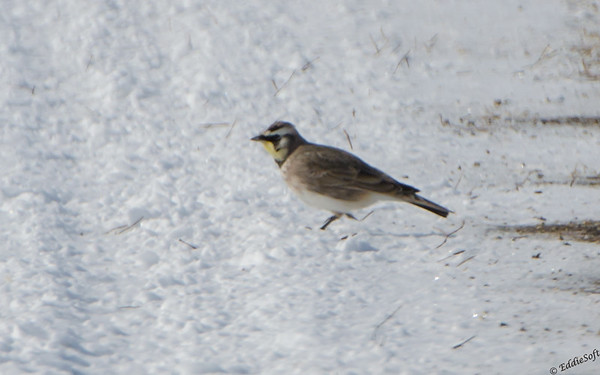 Unfortunately, I did not get a lot of pictures of this bird.  Linda was driving which meant every bird on the road was in danger for its life.  You can almost see the horror this specimen was experiencing in the expression in the first picture.  I haven’t seen that much fear on a bird’s face since that Snowy Owl was slaughtered on Linda’s Jeep window… and that Goose that got a feather shave from Linda’s fairway wood – seeing a theme here.  No fears this trip, no birds were harmed in the taking of these shots, promise. Better get to some facts.  First of all, they cover almost all of the US during the winter (odd since I never saw them before and haven’t really seen them very much since).  During courtship the female simulates a dust bath to win over a potential mate – apparently males get horny for dirty females.  If you thought I was going to pass up that joke you do not know me very well hehehehe,  The only other interesting tidbit is the gathers up pebbles, and such to place beside their nests.  This arrangement resembles a paved walkway … but Cornell notes they really don’t use it as such.  Cornell’s hypothesis is that it could be used to hold nesting materials in place during the construction phase.

All I got for you today – hoped you enjoyed this new bird to my list.  Wonder if Ron is noticing my bird count is in overdrive as of late?