Greetings everyone!  I now have a new bittersweet birding experience as of two days ago.  Birding to me is about the hunt as much as it is about the execution of the photo capture (which determines whether it can be counted our not based on the highly technical and strict Doerfler Birding Rules – link here).  Linda and I have traveled far and wide hoping to track down a specific bird or to just explore new habitats to see what we can find.  Every once in a while this cycle reverses in that a bird comes to me.  This is exactly what happened to me last Wednesday night.  I was working on surveying part of my lot just past dusk when all of a sudden a fluttering was heard over my right shoulder.  Startled, I looked back to notice a large object moving my way.  First thought was a bat but it looked too big and bulky for such a creature.  When it narrowly avoided hitting a tree it was obvious that it wasn’t a bat.  It did manage to land about 20 feet from me in a small clearing.  For at least a minute I stared at it… trying desperately to make out what it was.  The darkness had set in and only a small amount of ambient light was available.  The coloring on the back camouflaged it perfectly in the woodsy setting making it impossible for me to get a sharp image.  Then it hit me I could take a picture with my phone!  The second my hand made it to the phone the chicken like shape bugged out in a large semicircle up and out of view.    After a quick call to my brother, we determined it was an American Woodcock.  Dammit Dammit Dammit.  A few seconds of patience from the bird could have added a +1 to my list.  Never have I seen a Woodcock in the wild or in a zoo.  It was sweet to see such a cool bird.. but the bitter taste of missing the shot will be with me until I finally get it in the tin.

So instead of a Woodcock post, I bring you this… 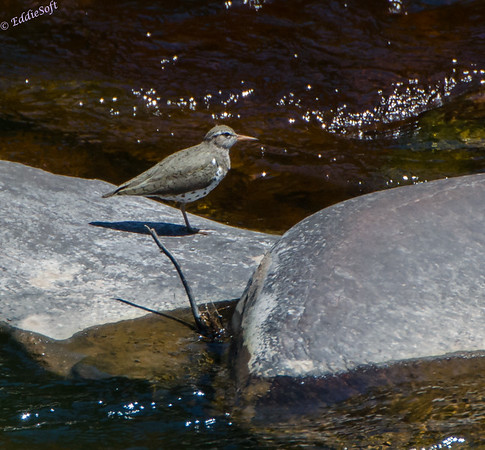 Do you recognize that bird?  Turns out I had these better shots of the Spotted Sandpiper originally featured during the Yellowstone series (link here).  Surprisingly, these shots were actually taken BEFORE the Yellowstone shoot which was in May 2013.  These were shot in July of 2012 – wow, I am waaaaay behind on my processing. 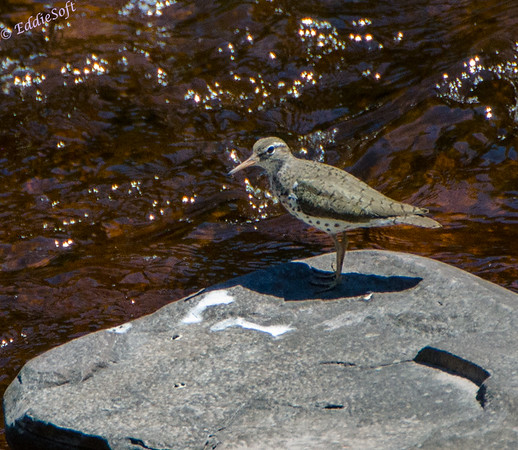 I chuckled while at a Rick Sammon seminar last weekend when the professional photographer gave advice to all of us aspiring shutterbugs to sort through all of our shots of the day and pick out the best ones before we go to bed that night.  The reason… otherwise you will get too backlogged and never get caught up – truer words have never been spoken. 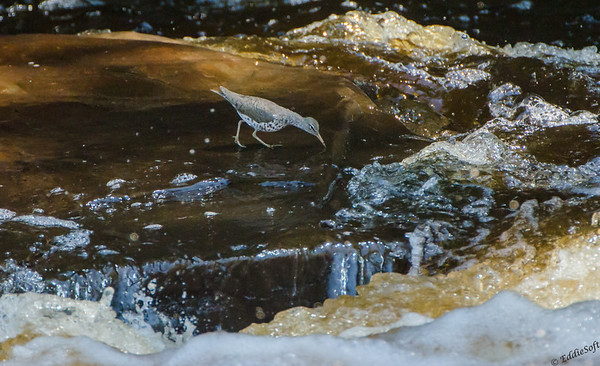 The bad news is I cannot exactly tell you where these shots were taken beyond they were somewhere between Wisconsin and Michigan – more likely the Porcupine Mountains in Michigan.  The caramel water does make me think of Wisconsin Dell area, but this was near a waterfall and that doesn’t ring a bell with our Wisconsin shoot areas.  I do remember it was during some harsh noon light so apologies for the impact that had on these images.  Based on the shadow alignment one would guess around straight up noon – in my world, the presence of a bird subject is more important than the available lighting.

This next shot cracked me up – it was either having a bad feather day, molting or just a juvi. 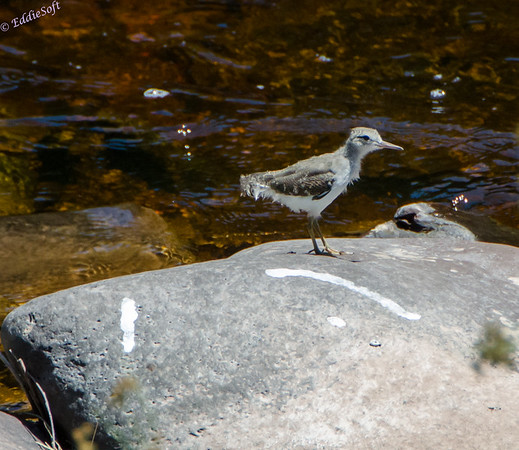 Note, the lack of spots indicates it is either a juvi or a non-breeding adult.  I was shocked how widespread this Sandpiper is – you would think that I would have come across this bird more than twice since 2012 based on basically covering the entire US and Canada territories during the breeding seasons (Summer).  It carries the Least Concern Conservation Status (yeah), so it isn’t like it is rare or anything like that. 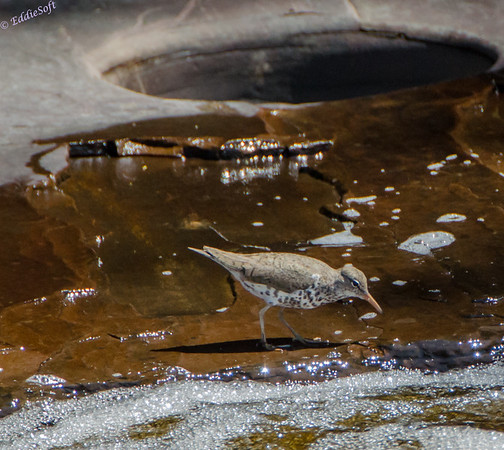 It does have an environment submerging color palette so that is one excuse I can use hehehe.  Oh well, one thing for sure, I can update my NA Bird List with a much better picture now – those previous Yellowstone pictures were a bit embarrassing.  Hope you enjoyed revisiting the Spotted Sandpiper.  Now only have 4 years of backlog to go – ugh.