Greetings from the snowy Midwest.  We are getting our first real dump of the year and it is a heavy one.  This is somewhat fitting being that this week has been heavy on the heart.  We lost our little buddy Kerby this week and it has left a mighty hole – he was a champion in the agility ring and more importantly in our lives.  I’ll never forget our time together.  Keeping busy always helps me through tough times so no better way than generating new +1’s for the birding checklist.  Today’s feature once again comes from our last September trip to Colorado. 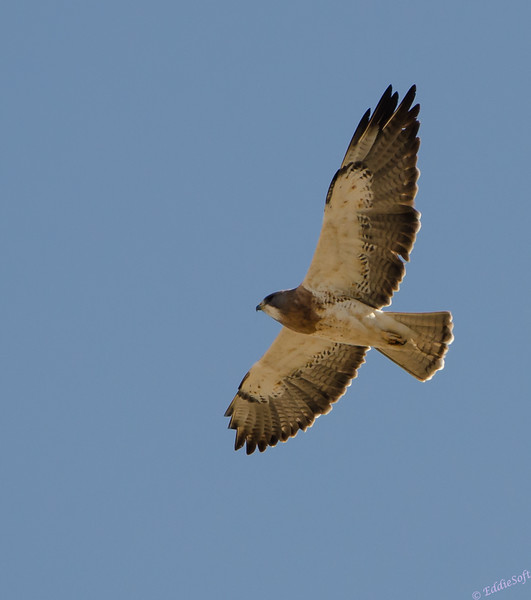 That, my friends, is a fine specimen of Swainson’s Hawk.  Normally Hawk identification is a herculean effort just short of trying to distinguish juvenile Sparrows.  It is fairly easy to figure out the easy ones like Red-Tails, but the rest bunch up in their characteristics to the point we end up having to flip a coin.  This was the case here where I really wasn’t sure what this one was until my brother Ron came to the rescue.  He has a really nice reference book to aid in Hawk IDs (sorry, can’t remember the name at the moment) and had recently found/joined a Facebook page specific to assisting in the ID process.  You will not find a better resource than a community devoted to a specific type of bird.  Ron offered to give it a try on a set of fuzzy pictures we had taken by the side of a road on the Colorado plains.  I’ll get to those pictures at the end – opted to go with a better set at the start for the bulk of the post.

The pictures you are seeing here came from another observation at a filling station outside of Denver.  We had pulled in for a quick stop to give the dogs a break and top the tank off.  As we pulled into the pump area this  bird caught my eye.  It was literally hovering over a construction site between the station and the highway.  The fact it was just staying in one spot gave me an early impression it was a Harrier.  This changed once the Beast was on point and could make out the more distinctive features of the bird.  Turns out there was a healthy headwind it was leveraging to keep focus on a particular area alongside the construction.  After about a minute it dropped the daggers and dove for the ground. 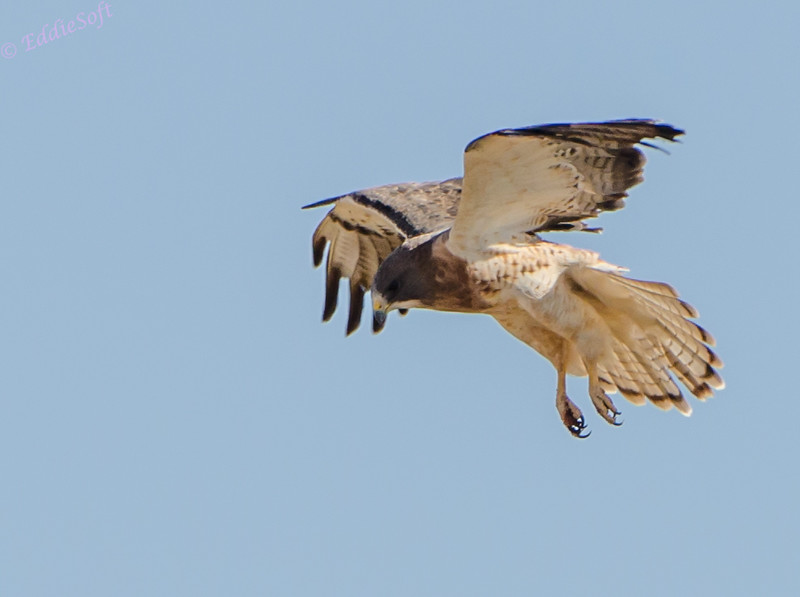 Hit the jump to read a bit more about this Hawk and view a few more shots.

Those hunting shots did not come out as nice due to a fence and construction equipment grabbing some of the focus.  The dive did not result in dinner.  Bad for the Hawk but good for whatever creature was stirred from its hiding place due to the construction site activities.  Likely disappointed it broadened out its wings and took to the skies for another look. 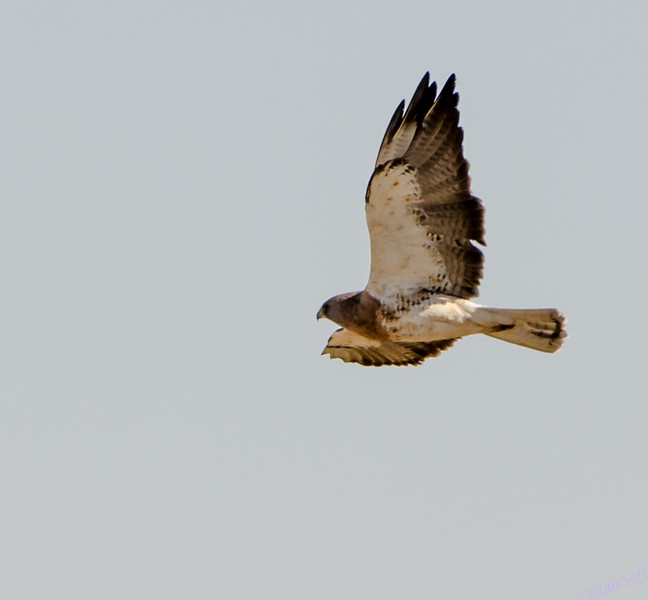 A few more minutes of circling netted little interest resulting in the Swainson cutting back to an off-ramp perch.  This gave the perfect opportunity to get the back view.  You learn real quick in the birding arena the number of viewing angles you can capture is inversely proportional to the amount of time required staring at reference books and web mining.  Notice the white markings at the base of the tail feathers and the thin highlighting on the tips.

Once landed I could get a little better shot of the facial features.  It also gave an opportunity for the Hawk to locate me … or more accurately spot the huge black glass pointed at it.  By then I had all the shots I wanted so put the glass down and just watched it a bit.  Those feet appear to be very versatile.  They are clearly tuned for killing, but equally adaptable to hold onto super thin perches. 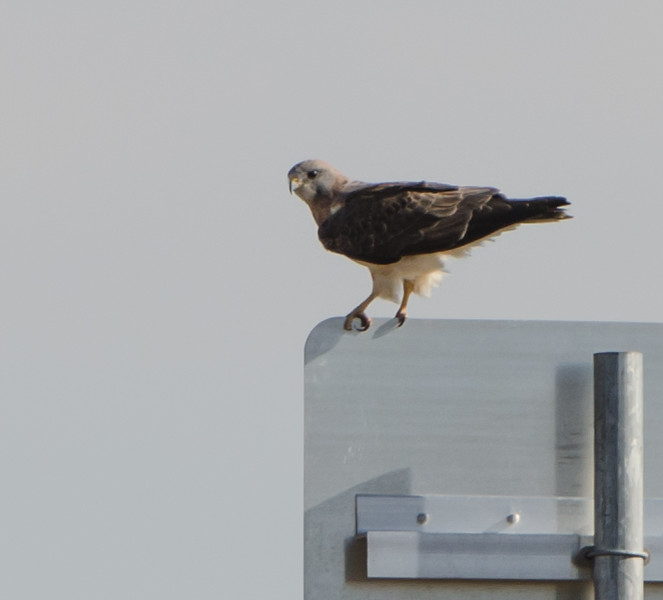 Per the comment earlier, we were able to utilize the Facebook Hawk community to help us identify this species.  The original shots were nowhere close to the crispiness above.  Truthfully, I thought ..err hoping  it was a different Hawk from the filling station sighting.  It did not take long at all for the community to zero in on the ID (even from the less than stellar pictures).  Based on their identification hints Ron and I were able to deduce that the station sighting was the same specifies – bummer!  That knocked out a potential +1 but did confirm that this was a new Hawk for the check list.  By the way, those pictures from the plains were from a looooong way off.  So much that the heat vapors from the grasslands were distorting the shots.  These final two shots were the best I could pull out of about a hundred that were taken.  Distance and conditions were playing havoc on those shots, so pleased I took the time to get the gas station observation in the tin.

So, how about we check out some interesting facts about this bird of prey. They spend their Summers in the Western half of the US ranging up to Alaska and down into the upper Central Mexico area.  For the Winter months they all pack up and migrate down to Argentina (the longest migration of the American Raptors – talk about fair weather birds!)    It is named after the original discoverer, William Swainson although it was originally confused with a European Hawk but corrected in 1832 – five years after Swainson had illustrated it.  Lastly, I might get to add a new word to your vocabulary.  A flock of migrating Swainson’s are referred to as kettles.  Thank me the next time you score in Trivia Crack when that question comes up.  It was pointed out by our friends in Cornell that these kettles can range in the tens of thousands – quite the birder’s spectacle. 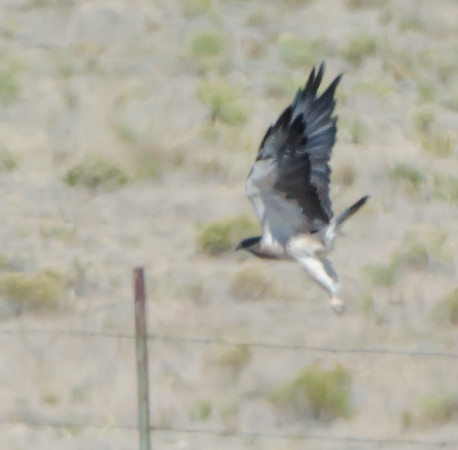 That’s all I have for you on this Western Hawk.  All that is left to do is put the check on the list!  Stay warm and safe everyone.

2 thoughts on “A Swainson’s Doubletake”