FINALLY! It has been like forever since I’ve posted. That is primarily due to a whole bunch of birding so far this month. So much that my queue has overflown. I still have to make my way through the Yellowstone pictures from like 3 years ago. Oh well, when the weather turns bad I’ll still have content to make my quota. The bad news is I probably will not remember a thing about the details surrounding the post event. Every once in awhile I get to jump ahead a tackle a topic more recent on the queue. Today is one of those time for I bring you this new entry on my North American Birding List! 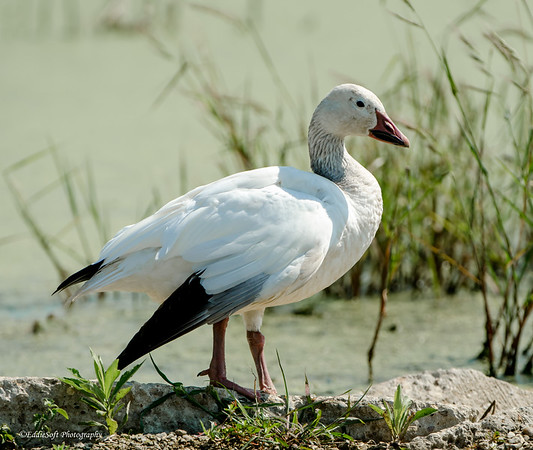 Pretty cool eh? This fine looking creature is a Snow Goose. I actually came upon this particular set of birds twice while birding at one of my favorite birding spots in Havana IL, Emiquon National Wildlife National Refuge. The first time came while I was alone trying to track down some shorebirds that fellow birders were reporting on a newsgroup. The bad news is it was a big fat blanking on the shorebirds, but spotting the Snow Goose ended up saving the trip. 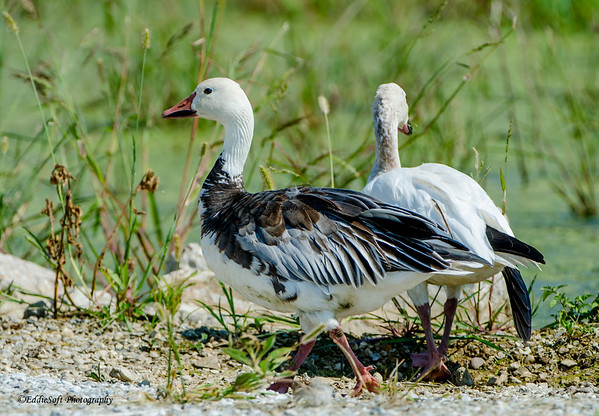 Hit the jump to see a few more shots of these Snow Geese!

The second encounter was with my Brother who had come down to try his luck with the shorebirds. We took a lap around the main Emiquon Observatory when we first got there. That produced some Wood Ducks and Pied-Billed Grebes.. but no Sora’s or Snow Geese which were targets for the day. Ron wanted to improve his Sora pictures and didn’t have the Snows in the tin yet. This disappointment was quickly turned around thanks to hitting the lottery on shorebirds – foreshadowing, there will be plenty of posts heading your way from all those +1’s. Having exhausted the puddle birds we made a quick trek back through the Observatory. There we located both the Sora and these three Snow Goose putting a perfect bow on the day (and a number of new entries in Ron’s list as well as mine.

One interesting aspect of these specimens was how docile they were.  Both times they would slowly walk away from us.  Keeping one eye on the grass they were feeding on and another just keeping track of our whereabouts.  This is in stark contrast to every other bird at Emiquon that was basically freaking out at a distant sighting of our approach.  Didn’t really make any sounds or even show any visible fear with wing flaps or head bobs.  As you can tell there is some distinction in the three.  The two mostly white ones are fairly standard, but the darker body one might be a Blue Goose/Blue Morph variety.  Typically those are more solid brown, but there seems to be a wide variety on the web. 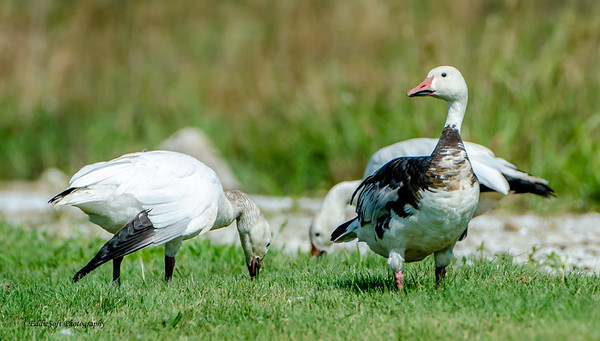 Yikes, out of shots.  Better get to some interesting facts stat.  They sport a grinning patch on their bill.  This was a key feature that helped verify our ID.  If you look close at the side of the bill, you will see what looks like a black gap where the bill halves meet.  They apparently like to travel in large flocks contrary to what we witnessed since these were the only three in the area.  Looks like Emiquon is right on the edge of their Southern migration to their Wintering home.   Hunting was stopped in 1916 but reintroduced in 1975 with their population increasing.  They do carry the Least Concern Conservation Status – yeah!  Beyond that, not much to really mention from our friends at Cornell.

Time to call it a night.  Take care everyone and happy birding!

4 thoughts on “Snow at Emiquon”