With that cleared up, let’s get to the latest addition to Bri’s birding list. You are looking at a Western Tanager. All joking aside, I do think she is pretty and quite distinctive with her yellow wing barrette. It is that particular feature spotted in the digital darkroom that got me running for the reference books. Initially wrote it off as a female Oriole in the field. 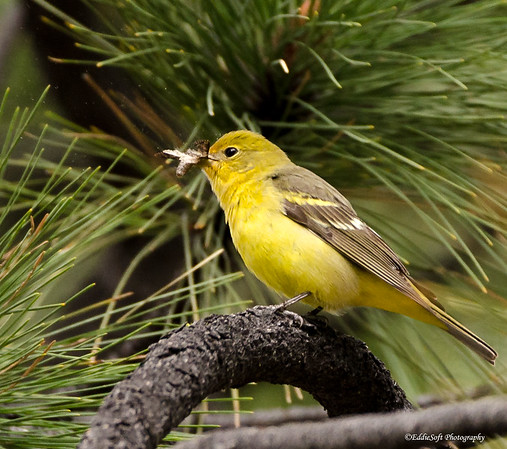 While gathering some interesting tidbits to share, noticed this on Cornell’s site, “They also scan for insects, perching motionless except for side-to-side movements of the head before sallying out flycatcher-fashion to nab prey on the wing”. I can say definitively that behavior is dead on. I watched this specimen doing the exact same thing – moving its head up, down, side to side (see shot two above). Then it blasted out before returning with its prize. 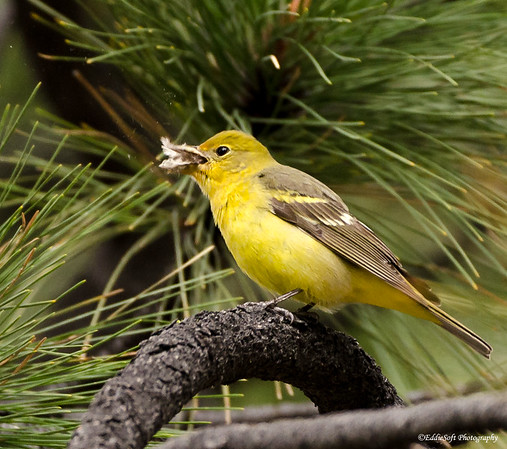 She sat there a bit showing off her “skilz” to the rest of the birds in the area (think Ferris Bueller when he caught the foul ball) before proceeding to gobble it whole. How many licks does it take to get to the center of a Tootsie Roll lollipop, lick, lick, lick, chomp.. THREE. 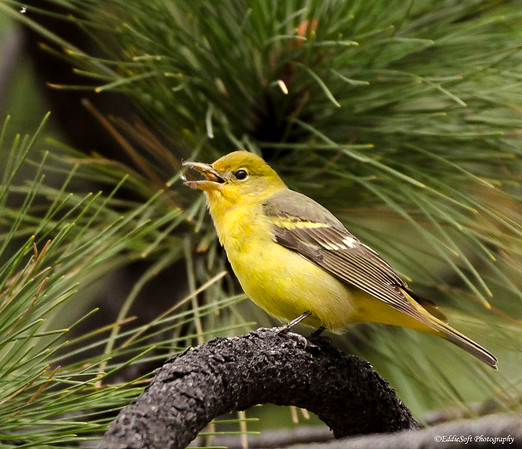 I guess what she lacks in grace she makes up for in beauty. Our pretty lady comes to us from Reno, Nevada. We used Reno as our hub on our way to Lake Tahoe back in May 2019. Our nephew was getting married out there and thought we would check out supposed little Vegas while we were nearby. Must say, Reno was a huge disappointment, but the rest of the trip was fantastic. There are more +1’s on their way from this bird trip/wedding combo.

With the weak casinos, we used the extra time to explore some birding locations recommended by the local nature group. The place where we found Miss Tanager was in an urban park setting around a pretty good sized pond – sorry, cannot locate the exact name of that park, however, it had a nice walking path around it with various sculptures scattered about. If I find it, I’ll update the post. 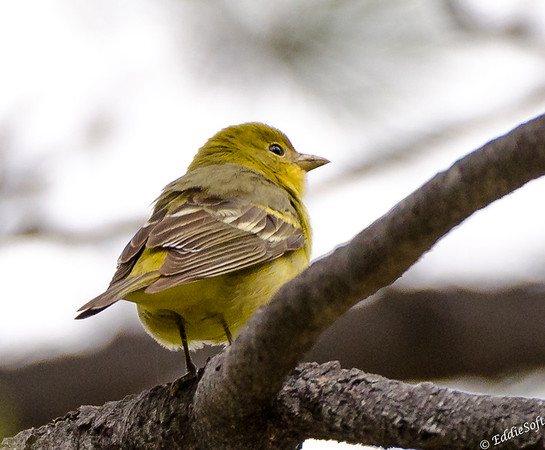 Finishing up the spotlight on the female, here’s the back perspective (above). She keeps the dull yellow body color pretty much 360 with the darker wing shade as a complement. That yellow bar is a good indicator for the field. 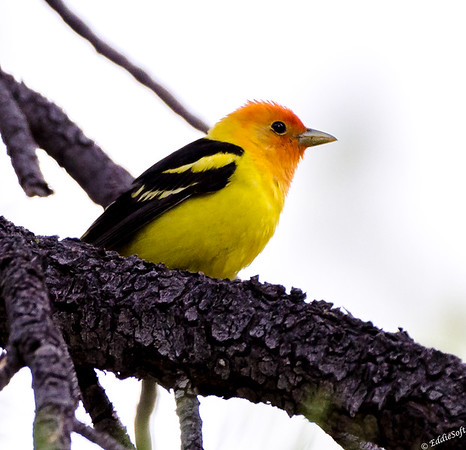 Unfortunately, struggled to get the settings right for this series of shots. I’d get it dialed in for horribly backlit poses milliseconds before it decided the dark spaces between the evergreens was a better place to hunt. Get The Beast on point to cut through the needles and damn if that ass wouldn’t head back out into the sun. Extremely frustrating and the shots showed it. Had to pull these first two shots out of the blackness.

On the bright side, I was at least able to tin the male. This species was clearly at the beginning of the line when colors were being handed out. Absolutely stunning and hard to miss when they flash by against the green tones in the forest. It will help if you stand back about 4 feet from the screen for this next shot… might even squint a bit to try and make this soft shot a little sharper. 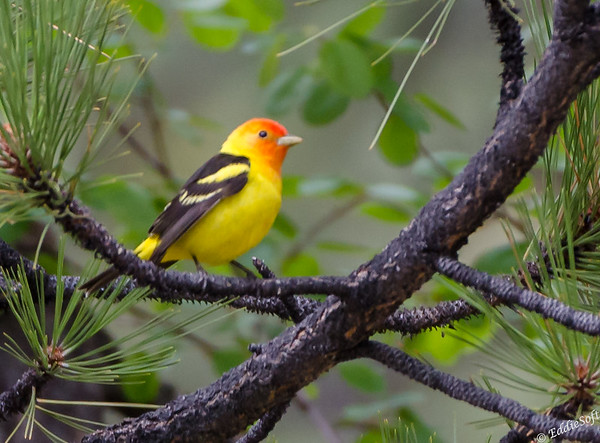 Would have been a beautiful shot .. woulda, shoulda, coulda…ugh. Anyway, you at least get the feel for the coloring. We found the male Davis Creek Regional Park in Washoe County, NV. This is tops on my list to improve on the next time we are out that way. True to its name, the Western only hangs out in the region spanning about 1/3rd off the Pacific coast. One thing to note is the larger yellow bar on the wing, however, you should have no problem IDing this dude in the field by its other distinctive markings. The females can be more deceptive with their subdued feathering. 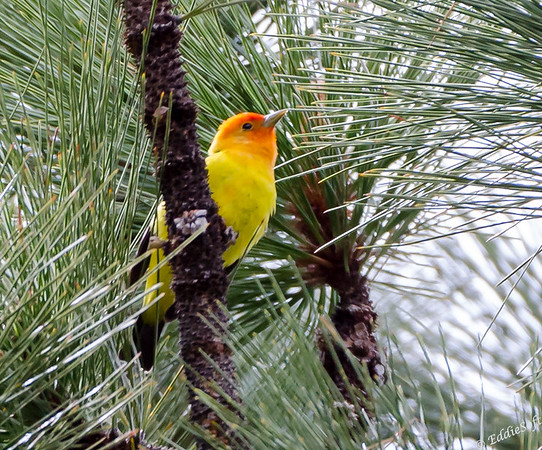 Looks like I am out of images for the Western Tanager sightings. Linda and I were actually there to get a new Woodpecker, so this was a surprise for the trip. A good add while we were out west. As an interesting tidbit for spending your time on my musing, the male gets its scarlet head coloring from a pigment called rhodoxanthin. Devoid of it in their own bodies, Cornell indicated it likely comes from their food source – as in insects. Doesn’t really explain why the females lack that coloring assuming the same bird species would have similar tastes. What say you Cornell?

With the Scarlet (link here), the Summer (link here) and now the Western, time for me to set my sites on the remaining Hepatic. That will require a trip down to the southwest and a good excuse to go pack the RV!