Greetings all! Just sitting here waiting for the deluge of rain to pass through so I can get to a ridiculously long training run. Was supposed to get back on the trails, but by the looks of it, going to be too muddy – no reason to risk an injury less than a month from the first race of the season. While I wait out the weather blahs, thought I would put a little NCAA tournament on and bang on the keyboard a bit. May not get it completed before heading out, so apologies if this gets posted later in the day.

Okay, let’s discuss this half Pelican, half Vulture, half Heron looking creature. 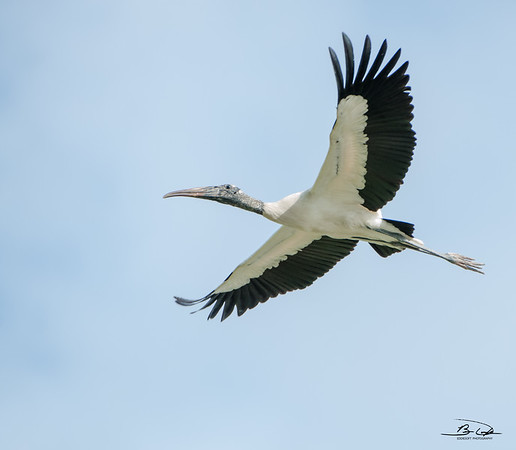 A bit creepy if you ask me. As I’ve stated during my bird lecture intros, Linda and I are destination wildlife/nature photographers. We essentially travel to our subjects – most of our vacations are specifically planned to get a particular bird or waterfall in the tin. Grab some research books, travel brochures, cross-reference with the birding check list, check the research books again to confirm (to the best of our ability) there is a good chance of finding it, pack up the RV and hope for the best. Sometimes it results in complete failure like the Arkansas trip we took last year (although I did manage to get a couple of unexpected +1’s and a Tarantula Hawk (link here) – Linda totally struck out).

Hit the jump to read more about the Georgia trip target bird.

Our trip to the Georgia swamps in May of 2015 was a quest for two specific birds … and a few waterfalls. We had read about the opportunity to get the Wood Stork at Harris Neck National Wildlife Refuge outside of Savannah Georgia. From the brochures and some searches on the web it appeared there was sufficient reason to subject ourselves to the hellspawn Ceratopogonidae, not to mention the Gators you’ve already read about (link here). Well, in the proverbial shooting fish in a barrel I give you…

There was PLENTY of opportunity to get the Wood Stork in the tin. I was basically in awe with the numbers of birds in that particular refuge. Every single tree in that swamp was full of birds – not talking about the little ones like Starlings and Sparrows – nope, those trees were absolutely bursting with the big boys. Snowy Egrets, Anhingas (link here), Great Egrets, Ibises and the prize for the day, the Storks. If you still need any of those birds checked off your list, recommend some travel time straight to Harris Neck NWR.

Today, we are going to focus in on the ugly duckling of the group. Compared to the majesty of the Great Egret, the fluffy cuteness of the Snowy and the intriguing Anhinga, the Wood Stork is closer to the Vulture level of cuteness – as in not likely one you bring home to mother. I am pretty sure the other birds would bully it and make fun of it if it wasn’t for how huge this bird is – Cornell used the word massive and I would have to agree that is spot on. The measure in length in the 40 inch range and hitting the scale between 4 and 6 pounds all packed into a 3 foot frame. You need significant lift to get that body off the ground and its wingspan of 60 to 70 inches is just the trick. 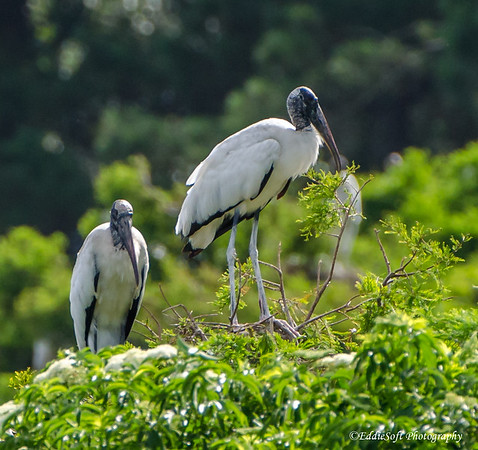 They are predominately white with black edging on the wings and tail. That palette by itself is shared by the Pelicans and Snow Geese and would be an overall pleasing sight if it wasn’t paired with one of the ugliest head appearances you could imagine. My apologies to the mothers of Vultures, but the scaly, featherless heads are not going to win any bird pageants. Now the Vultures have an excuse as their food preference requires them to stick their heads into pretty unfavorable situations – feathers would just trap the bacteria. From what I can tell, Wood Storks don’t tend to walk around sticking their heads into decomposing carcasses. Even if they did, their bill is so long and stout they wouldn’t really have to get that messy. 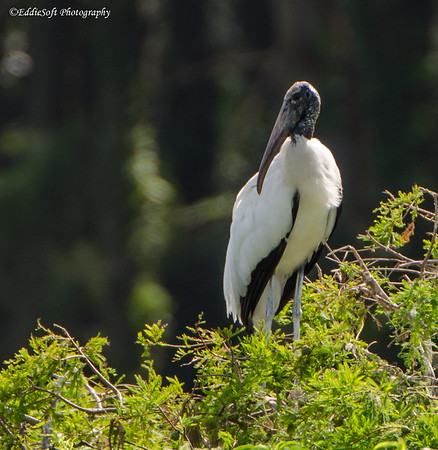 Their overall appearance is a bit lanky as well. They have large legs typical of wading birds primarily grey/black with a hint of pinkish on the feet. That would allow them to tower over the other “prettier” birds, if it wasn’t for their preferred resting position to have their necks and bills tucked giving a Quasimodo appearance. 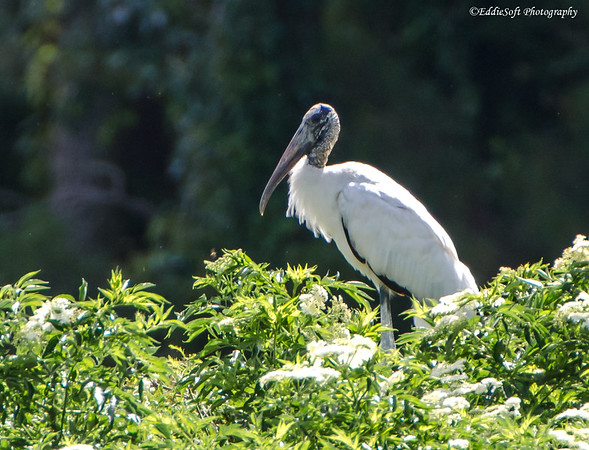 If you are wondering, both the females and the male adults look similar and thus unable to distinguish in the shots. Based purely on personal observations and some reference shots found on the web, it seems these Storks are rather docile and amiable to other birds in their region. Unlike the Peacock Butterfly I just learned about over at Butterflies to Dragsters (link here), they do not mind other birds intruding on their territory.

That includes even near their nests. It was amazing to see so many juveniles of different species intermixed in the trees without one instance of anyone getting overly concerned or hostile to their neighbors. Maybe it was due to the mixing of giants each with their own ability to defend themselves or simply knowing coexistence in the trees was better than risking death hanging out too long in the Gator infested waters below.

Here you can see two Stork offspring enjoying the sun and view on top of the trees with a Great Egret a mere feet from their nest. Granted, it looks like one of those Stork juvis weigh as much as that Great Egret, but still, just a well-mannered group of birds even with their precious babies out on display. In the picture below, I distinctly remember uttering a “wow” when one of the juvis decided to stretch out the wings – just imagined that Egret going “holy shit, get that kid signed up for our basketball team!”. You will also notice the juvis have a paler bill and white fluffy feathers on their head. The bill turns black as they age and thanks to not having Rogaine that much more appealing head dress falls out.

Might as well point out the juvi Great Egret towards the bottom of that shot as well – All the different birds had offspring in those trees. Now back to those huge wings! 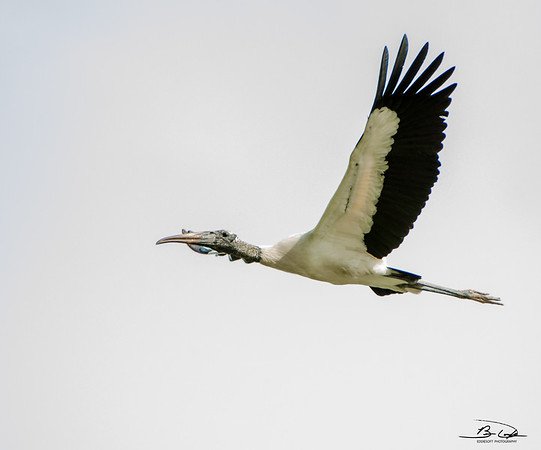 If the Anhinga’s look like flying crosses in the air, the Wood Storks look more like flying plus signs with their length more balanced to their wings. Rather effortless in their flight likely due to the wind they are able to gather up under their large wings and their ability to leverage the thermals. I ended up leaving a few shots out as they flew just over my head due to a) being poorly executed thanks to trying to keep a bead on them with the Beast while they passed over and b) they are typically constrained to just feet, a wing or a bit of the bill being way to large and close for the 400mm (even pulled back to 200mm). 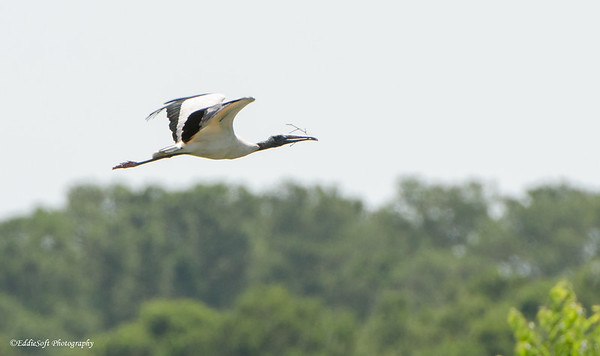 Luckily a number of them were taking flight patterns further out allowing me to get more complete shots. This one happened to bring back some home improvement materials – “Hey Stork, with those wings you could bring back some bigger 2x4s.”

They may look graceful while soaring, but they look downright clumsy on their approaches. Their landing gear will drop a significant distance from their target and then it becomes a controlled bit of chaos to keep the body steady enough to land on the desired platform. To their credit, it may have looked like a crash waiting to happen, however, I did not witness a single failed landing. 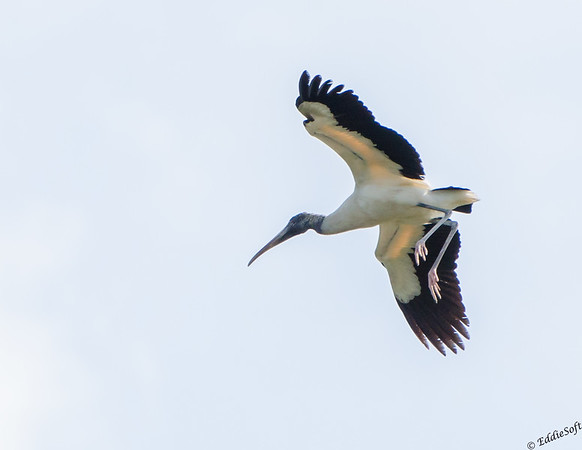 Ugh, Iowa just lost in overtime and I need to hit the pavement or it’s going to be dark for the last miles.

Okay, back. Sorry about that, the rain let up and I needed to get my 15 mile run in. Now where was I – oh, yeah, the Wood Stork. So this monstrosity of a bird prefers to hang out along the coasts of Florida, the Keys and then around the edges of Central America. As you know now, they head up along the Georgia coast to breed. Apparently these swamps are good for raising their offspring on crustaceans and fish. The adult Storks are generally pretty quiet, but the offspring can be extremely loud. We did not really witness it that much, but every once in a while you will hear a loud “braying” coming from the nests. Demanding little buggers. 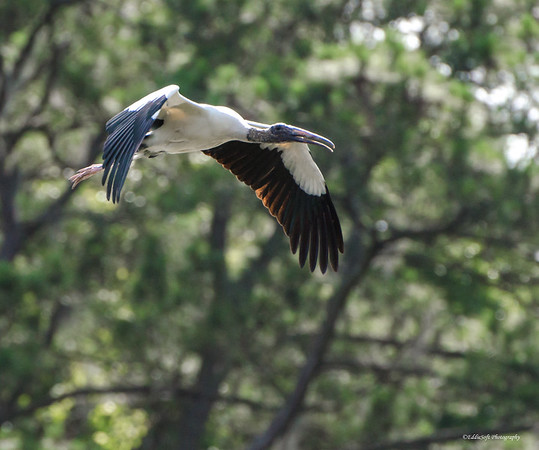 Okay, the last little tidbit is a bit disgusting so I am giving ample warning to keep your pipe clear of food and drink – especially if you are reading this while drinking your morning coffee (that’s you TCJ ha). All ready… okay, here we go. In order to keep their babies cool in the hot Georgia sun, the adults will regurgitate water over them. And now we know the real reason they lose their head feathers – yuck. Okay, you can go back to your coffee program now. In closing, an attack shot to help Ron recognize them in the field. 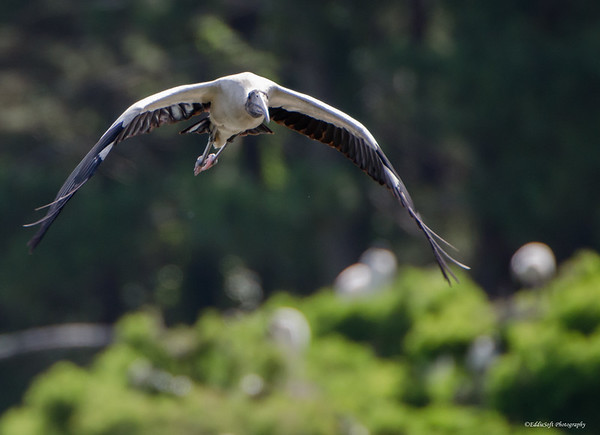 If one of these light into you, you are going to have a bad day. This has been a long post and thus will leave it at that. Thanks for dropping by. See you again real soon now, but right now the legs want some frozen pea treatments… and Ron, just an FYI, Raven had the first tick of the year tonight so they are officially out.

13 thoughts on “The Stork Delivers”