Let’s go ahead and continue with the Georgia birding trip theme for another March post. From what I can tell from a quick count that excursion to the swamps to the east resulted in at least a +5. Yep, 5 count increments that have simply been sitting in bit purgatory since May 2015 waiting for someone to give them a bit of love and in some cases a dose of processing to get them in decent enough shape to show the world. Suspect there’s probably less than 800 images left to comb through to finish out the haul from the trip – one good effort over the weekend should put a bow on Georgia processing. That just leaves the easy part, smacking the keyboard in hopes of delivering a post worthy my reader’s time. To that end I bring you the second +1 from the trip. 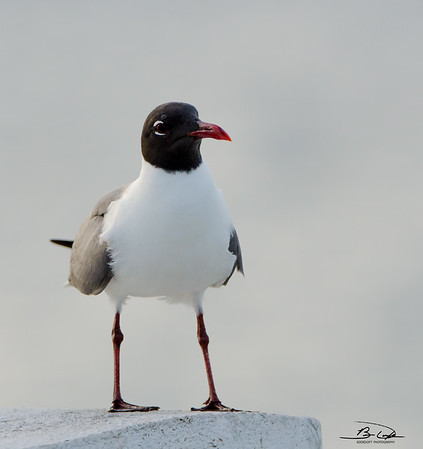 For starters, in case you haven’t noticed, I do not feature a lot of Gulls on the blog. There are two main reasons for this. One is the fact that they can be damn hard to ID unless you are lucky enough to find the ones that are regionally constrained or have some unique element that makes them stand out from the horde. I have taken 10’s of thousands of shots of Gulls in my adventures in the field and very few of them fall into the easy to ID category. Many are juveniles or females which have about an equal chance of getting correctly labeled as a juvenile Sparrow. Thus, those shots lay nestled on their digital platters patiently waiting for me to dig in and devote the time and energy to properly check them off the list. Knowing the Gulls are pretty much untapped gives me a bit of comfort when it comes to my relatively low bird count and something to fall back to on a rainy day. 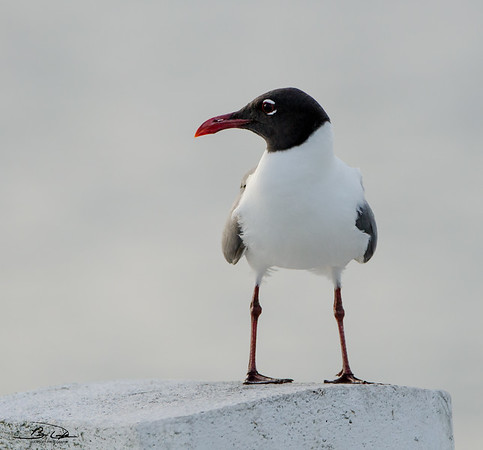 Hit the jump to find out more about this hooded bandit.

The other reason I am not in a huge hurry to bring out the Gulls is the fact there are people out there that absolutely hate these creatures. I’ve noted previously, I’ve been accosted by locals out in the field that were downright offended because I had the audacity to stop and take a picture of one of these scavengers. You would have thought I called their mother a disparaging word and all I did was snap a few shots for a rainy day long into the future. Whenever I bring this hostility up to Ron he counters with my absolute hatred for Moles that refuse to stay in the acres of forest sanctuary I’ve allotted them … okay, maybe I can relate to the Gull angst out there. 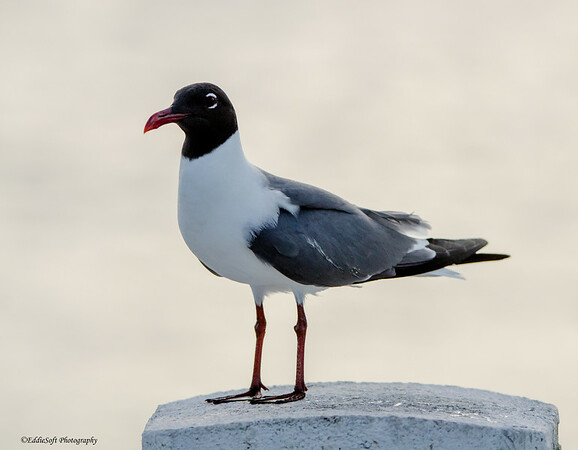 I have bothered to bring you two Gulls to this point. One was the Ring-Billed (link here), which is pretty common in the area and has the distinguishing bill mark. The Franklin (link here), found in Davenport was pretty easy to ID with the black hood. Even featured a Herring that Linda snapped behind my back (link here) when she was supposed to be shooting waterfalls. Today’s Laughing Gull officially makes the 4th Gull to make it to Intrigued and therefore the 3rd Gull to officially get checked off the list. 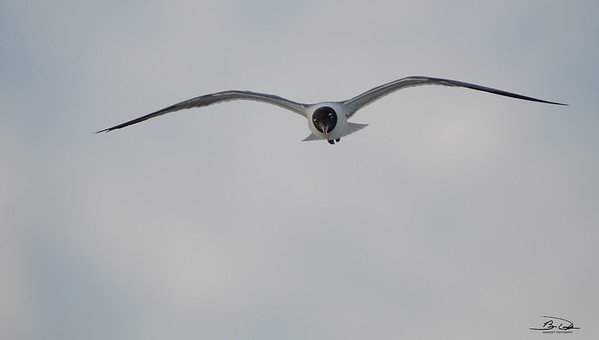 The Laughing breeding male definitely has a very distinguishable hood that puts it into a small species grouping. As with the Franklin, the black hood makes it look like it was dipped in a paint can and then detailed with a broken white eye ring and given a dark orange/red bill. Distinguishing it from the Franklin is the fact the hood is more of a full dip on the Laughing where the Franklin’s hood comes up a bit on the back of the head. Frankie also has a wider white eye ring and there is a white band near the wingtips where the Laugher has solid gray that transitions directly to black. Note, I purposely left the shot above in to help Ron ID it in the future since this is the angle he usually sees of birds as they continually attack him in the field – no joke, something about him keeps causing rather docile birds to go into full medieval mode on him. Normally I’d be concerned, but it is hard to effectively help when you are rolling on the ground laughing. 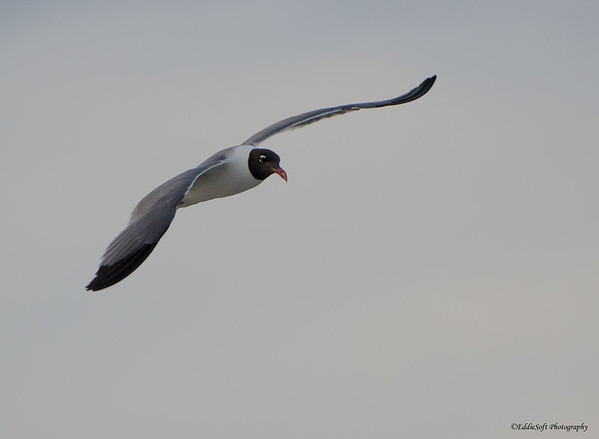 Bringing you all the angles I can today. The shot above shows the upper wing color pattern which confirmed the absence of the white line. It also shows the even dip of the hood quickly leading to the Laughing Gull confirmation. Below is the full shot of the belly in flight. Basically solid white with the legs neatly tucked away. 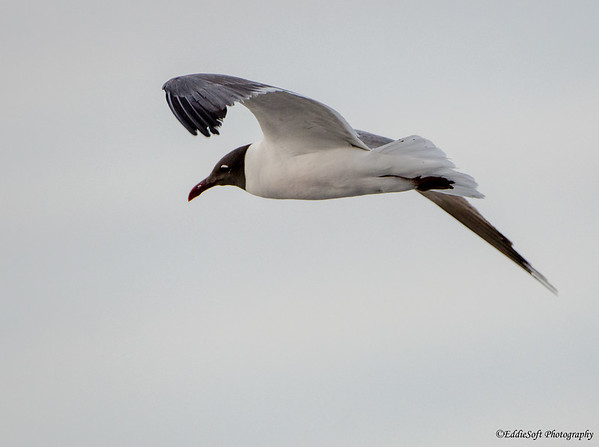 Okay, now to the difficult specimens, the non-breeding adults or first through second winter juvs. If the ones featured here were not directly hanging out with the breeding adults above, it is likely I would not have been able to make the connection without some serious reference time. The smudges at the back and side of the head along with the thick dark bill provides some help. 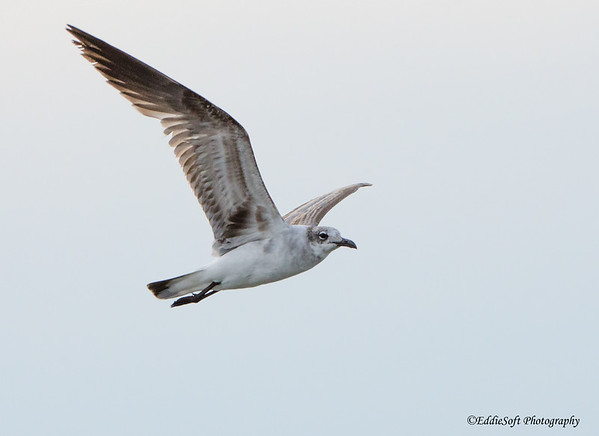 Should probably mention these shots were taken while on the fishing bridge at Tybee Island. Pretty nice walking bridge, but absolutely full of people fishing off the sides. One of my phobias is getting hooked with a lure while someone is executing a deep cast. Not sure why, I spent a good part of my early years fishing with my father and brothers so it isn’t like I’m afraid of the gear and it hasn’t ever happened to me, just a constant vision whenever I’m walking past rows of fishermen – guess by definition it is irrational unlike my fear of clowns which is COMPLETELY justified and ABSOLUTELY rational. Happen to like the shot below as it hints at the breeding adult while featuring the more obscure non-breeding specimen. 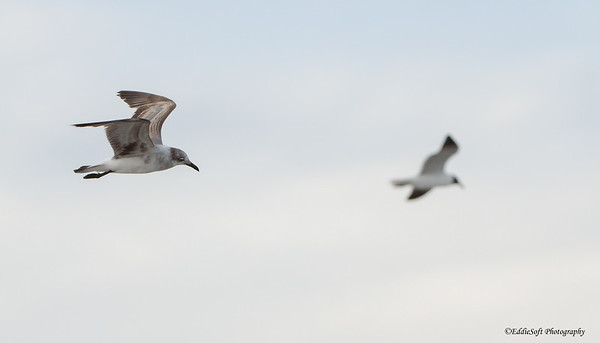 Wow, thought I had provided plenty of shots and next thing I know I’m to the end and still have not brought you the interesting tidbits – sorry for the rambling in this post – blame the clowns. The Laughing Gull pretty much hangs out along the coastline on the east, through the Gulf of Mexico and then along Central America’s coastline. They will colony up in the ballpark of 25,000 pairs. They eat just about everything and admittedly can make quite a nuisance of themselves. They are an example of what happens when fashion threatens wildlife being that the Laughing Gull was decimated in the late nineteenth century for the hat trade. They have since recovered to over 500,000 breeding birds in North America. Oh, and in case it isn’t obvious, they were named in tribute to their propensity to laugh at photographers who fall into the water while trying to capture in flight shots and of course those idiots who manage to get a lure lodged in their face. 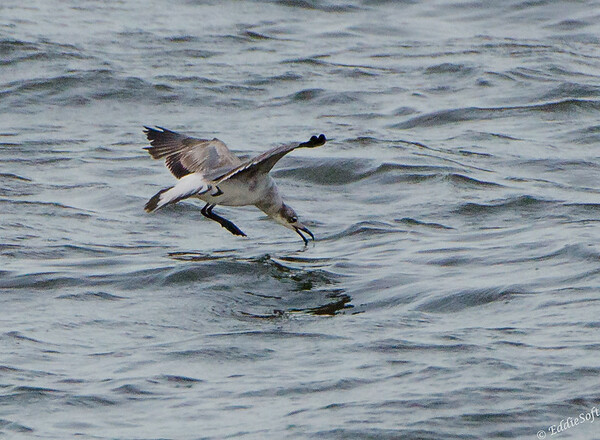 Going to call it post, have a serious to-do list to tackle tomorrow and should probably get some shut eye and let the body rest of bit from tonight’s intense core workout. Unfortunately, now I can’t get evil clowns out of my mind so suspect it will not be a restful slumber.

6 thoughts on “Have a Laugh on Me”