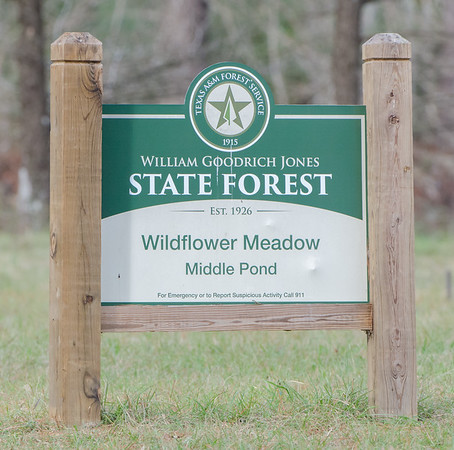 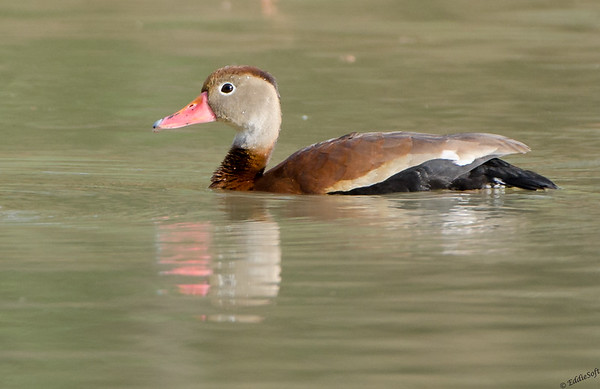 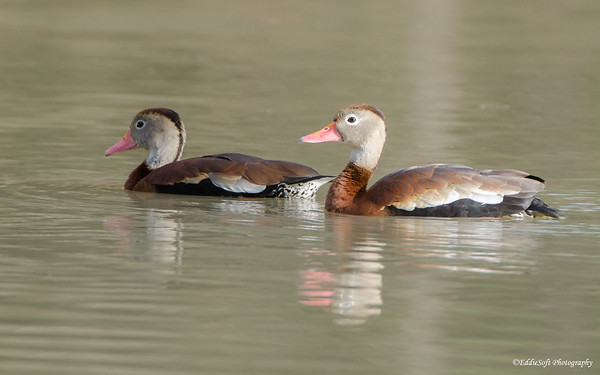 Not wanting to startle whatever new creature this might be, I slowly turned and faced the pond. Ummm, that definitely isn’t a Merganser. I had seen a few references in passing on the Whistling Duck – obviously not enough to make it into my sort algorithm. A quick check of my Audubon app confirmed the specimens on that pond were Black-Bellied Whistling-Ducks. Amazing, less than two minutes into the forest and I already had a new bird! 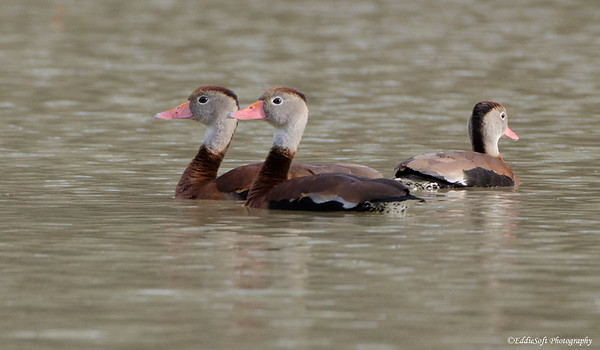 They were everywhere on that little pond, paddling in multiple groups of 6 or so – sometimes in complete chaos and other times getting in final practice for their new marching band routines for the weekend’s duck games. Apparently, there was no need to be stealthy on my approach – these birds couldn’t care less.

Unfortunately, I did come away with a bit of disappointment. These were Black-Bellied Whistling-Ducks. Surely they were named for their incredible ability to .. well..umm.. whistle. I was eager to hear their rendition of Patience by GNR or for my hipper audience, a little Death Valley by LP. Figured I’d have a little whistle along because it is physically impossible to NOT join in when you hear those songs

Alas, there was nothing. These birds would make a mime proud. Even when they were startled by incoming visitors they fluttered a bit to avoid being trampled and went about their exploration. Yes, the thought I was once again taking pictures of decoys came to mind for a brief moment – I would deny this has ever happened to me, but sure enough, Linda has had the opportunity to have quite the hardy laugh at my expense more than once. I like to give credit to the carver in those situations, hang my head and move on to the next birding location. 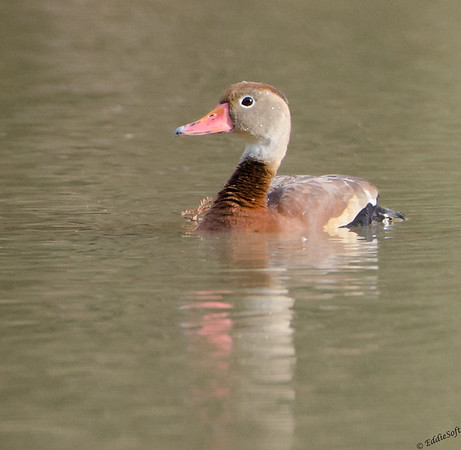 Based on the regional maps, looks like these rather docile ducks tend to hang out in the Southern tips of the US coastline and then down into the Central and South America region. Apparently really like the Brazil area for some reason. Will have to do some checking on their preferred sports – it could be that they just really enjoy good soccer and sand volleyball games. All things considered, this species comes the closest to Illinois of all the Texas birds that have been featured here as of late. Still have to head down to the Arkansas/Louisiana region during summer, but still in range if you want a quick check (… hint Ron). 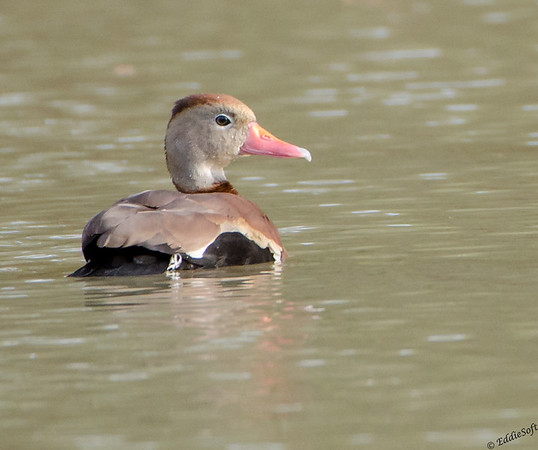 Like the Wood Duck (link here), these Whistlers are tree perchers. Unlike most ducks, they also have a lack of dimorphism – or lack of distinction between the sexes. You crossword puzzle maniacs out there can thank me later for that addition to your word set. This was a relief to learn – was beginning to think these ducks were high society snobs that didn’t allow females into their social ponds. 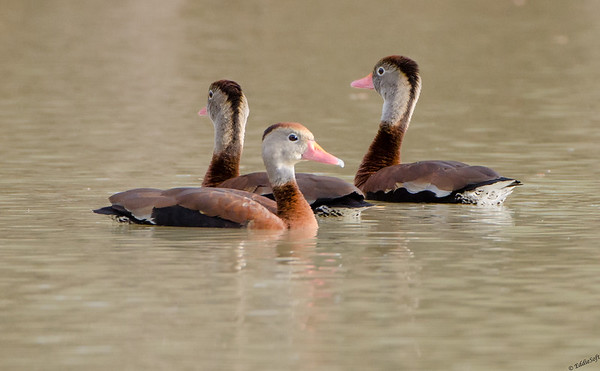 Whistling Ducks do not build nests. Instead they simply seek out cavities in trees walk up, pop 9 to 18 eggs out on the spot and head back to their card games. Oh, and here is a new one for me, they are also partake in egg-dumping. As if choosing to dismiss with the chore involved in actually building a nest wasn’t lazy enough, some females will simply walk up and drop their load of eggs in with another female’s eggs. Note, Cornell didn’t really explain how this transpires. I envision the male starts a romantic whistle tune enticing the current owner of the nest to take a quick look at who might have come calling – meanwhile the mistress sneaks in, adds a bunch more eggs and high-tails it out of there. Cowbirds are already on my list of bad birds for doing this – at least all the children will look alike – can’t imagine the amount of explaining that happens when a victimized mother bird has to explain the birth of a Cowbird baby to the husband. 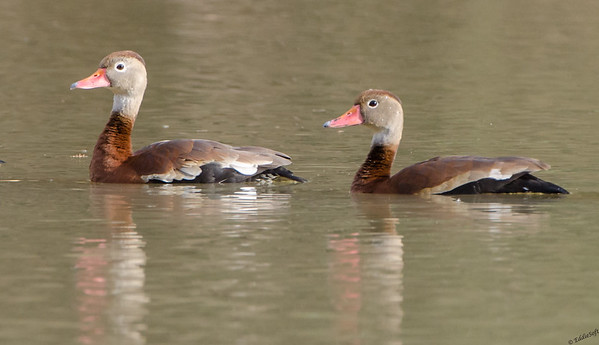 Whistling Ducks can be easily distinguished in flight from the large white bars on their wings. You can just make out this coloring on the edges of their folded wings. I wasted a lot of digital card storage trying to get a decent shot of them in flight. The digital darkroom floor was littered with failed attempts. I thought the following shot came out fairly decent. 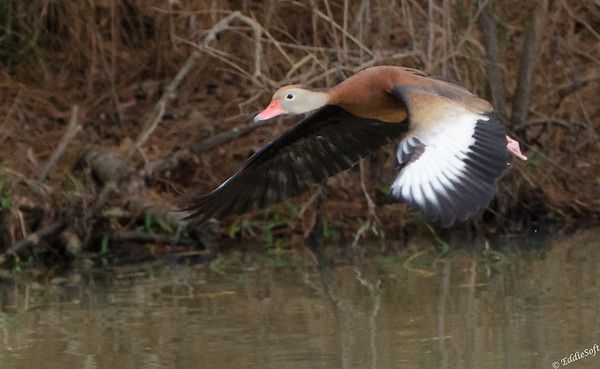 Would have liked to have reduced some of the white and foot blowout on the next shot. You can tell the range of light I was trying to fight through. The lighter coloring of the pond allowed me to push the shutter speed up with the help of some panning to compensate. If they raised up to far, I was shooting against near blackness from the distant trees and bank thicket totally screwing up my settings. 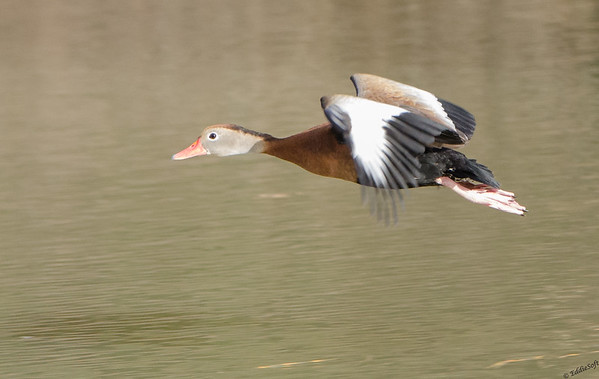 I did much better on the landing shots. There was a small hesitation when they put their landing gear down and engaged the flaps to slow acceleration. That gave me the perfect chance to get a decent shot – and by decent, I mean a terrifying shot of a headless duck hanging hauntingly over the pond. 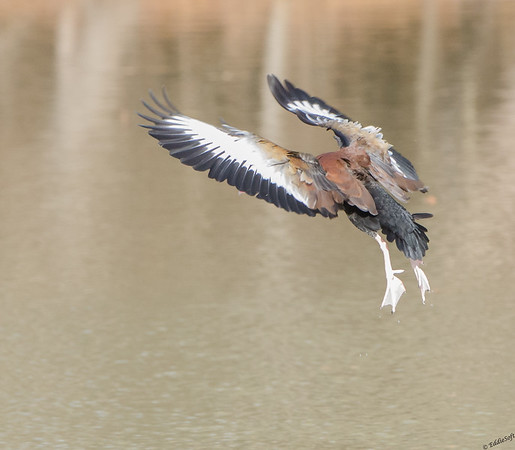 I would have been putting my running skills to the test if I had seen it carrying a flaming pumpkin in its webbed feet. 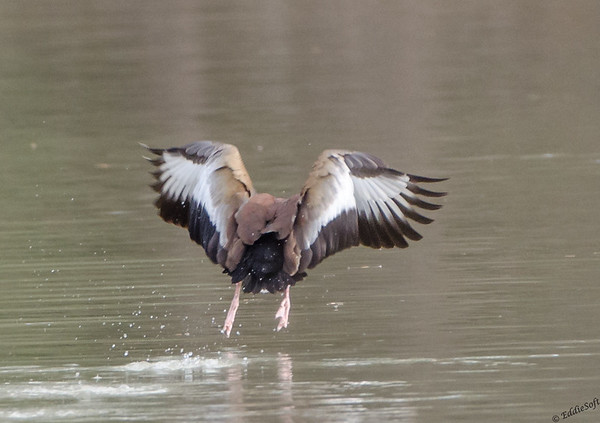 Thought I would close with two shots that totally cracked me up. In every raft of ducks there is always at least one comedian in the bunch. You know, the one that spends its days tormenting the other ducks on the playground and takes great pleasure at the discomfort of others. It didn’t take long to spot the joker in this bunch. 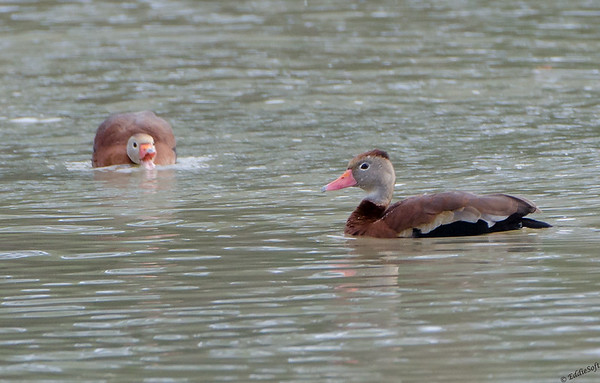 The jester would get low to the water imitating a deadly shark and start blasting the Jaws theme song on its iPhone. It would hunt out an unsuspecting duck and head straight for it. .. Closer.. Closer, Closer and then raise out of the water before crashing down and splashing his victim.

“Haha, I made you snort out your bill… classic!” Telling you, one in every bunch.

Put you through enough pictures tonight – time to call it. Hope you enjoyed reading about the new addition to my list. Admit it now, you started whistling a song sometime during this post …. admit it … hehehehe.

5 thoughts on “Whistle While You Waddle”