If you haven’t noticed yet, Linda and I have a few days off from work to enjoy the holidays.  What better way to celebrate extra free time than cranking out posts!  This month I was able to bring you little birds, big birds, big squirrels and bigger squirrels.  Now it is time to step up the weight a bit and bring you some of the larger shoots from the Yellowstone National Park trip back in May 2015. 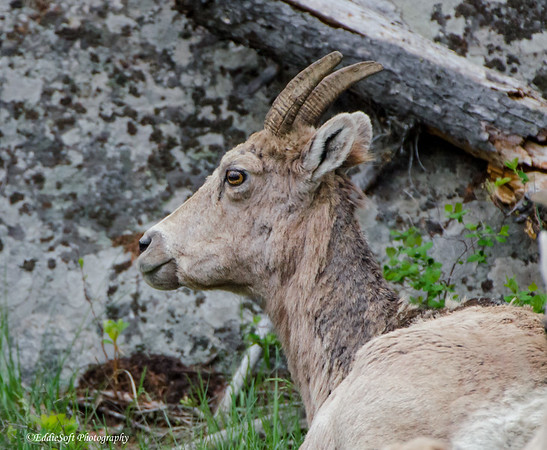 Today we feature Big Horn Sheep.  I did some quick reading up on them to see if I could accurately tell you whether these were all rams are ewes seeing as none of the subjects I opted to use in this post have the more telltale feature of the full curved horns.  The females also possess horns but as stated by our friends over at Wikipedia, they are not as prominent and only slightly curved compared to their adult male counterparts. 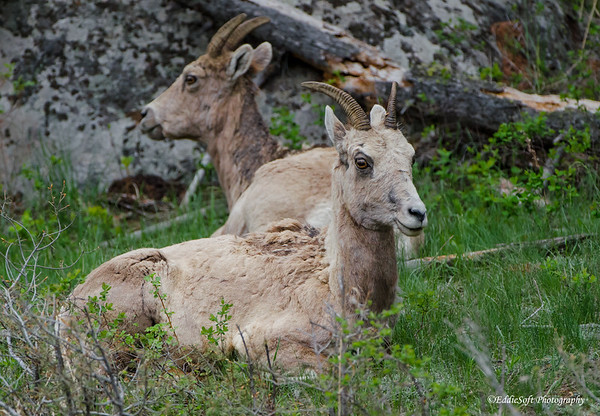 Hit the jump to see a lot more pictures of the Big Horn Sheep from Yellowstone!

These shots definitely show a small, less curved horn structure on these specimens so guessing they are likely females.  The only question was whether they could be male juvis or not.  Two more references didn’t yield any better clarifications beyond some pictures showing juvis that looked really young and easily discernible.  Sorry folks, I’m going to have to punt on that one. 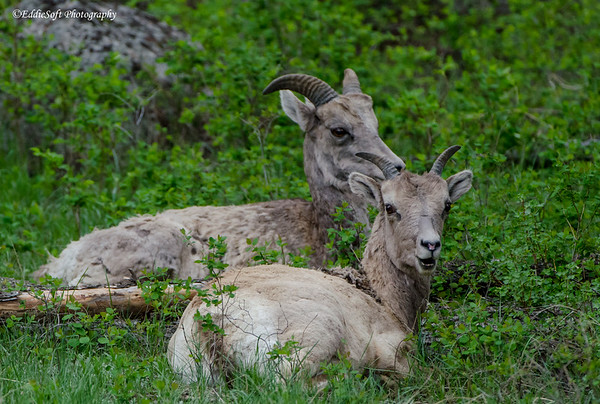 For the most part, these Big Horn Sheep are fairly docile outside of their pre-rut and rut season when the males take it upon themselves to show off for the chickies.  I’ve never experienced it in the wild, but seen a few documentaries on their male on male clashes.  These violent contacts result from two rams separating themselves by a distance before sprinting at each at around 40mph and cracking horns. 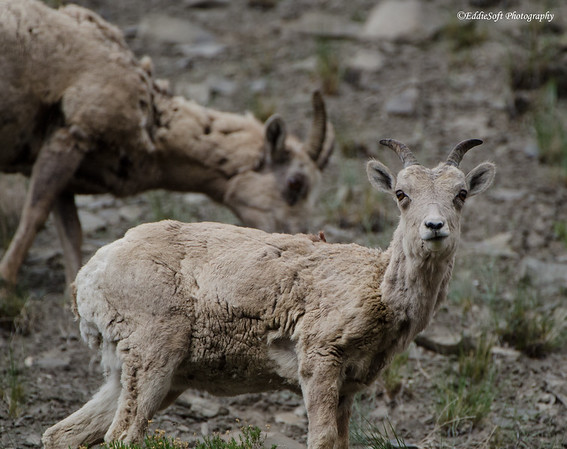 Apparently this clash of horns can be heard from a mile away.  This doesn’t surprise me seeing as how those ram horns can grow up to 3ft long with a base circumference of a foot.  The aggressive mating ritual limits the mating of young males until they reach 6 or 7 years old.  Obviously these young males can quickly determine what level of brutality their young noggin can withstand. 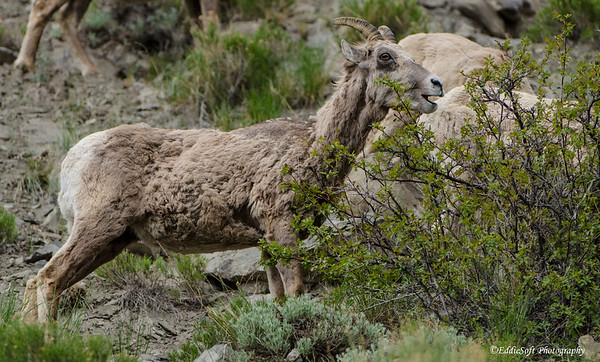 Per Wikipedia, the males have structural compensations in the head like large horn cores, enlarged cornual and frontal sinuses, and internal bony septa in order to withstand this testosterone display.  They didn’t go into detail on how the brain itself is protected seeing as how our fluid suspended brain would be sloshing around for days after a 40mph hit like that.  You would also think their neck muscles are extremely strong as well – if nothing else, to help hold up 35 pounds of horns. 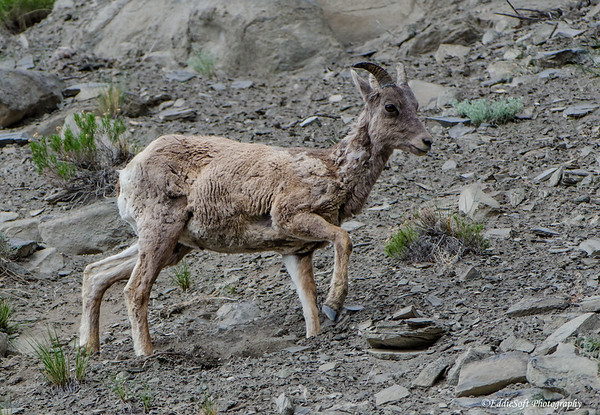 These shots came from two different sightings of these animals while at Yellowstone.  Dave and Giselle get credit for the sightings on the side of the hill.  Now that they are residents of Montana, they have the luxury of visiting the park whenever they want.  They had spotted Big Horn at this particular spot on a previous trip and sure enough they reappeared at the same location on our trip. 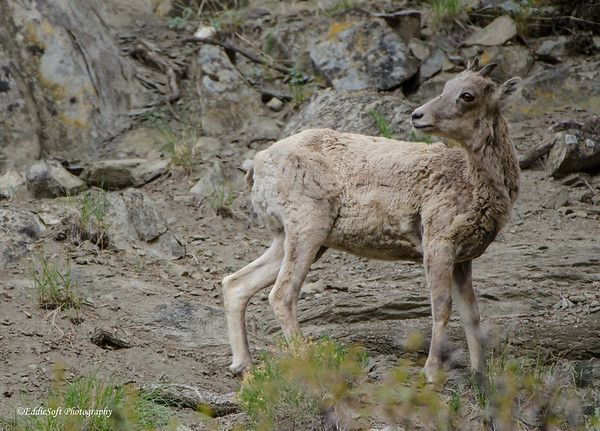 The herd that was moving through at the time didn’t pay us much notice.  They just went about their slow continuous walk consuming any time of shrubbery or ground morsels they encountered in their path.  Per another reference site I found, this is typical of the females who pretty much stay on the move most of their active times.  This provides them some protection from their predators which appear to be Bears, Wolves and Cougars.  Would guess those predators would need to be pretty hungry before taking the risk of running into a ram while hunting females and juvis – a blast from those horns would lead them licking their wounds for months. 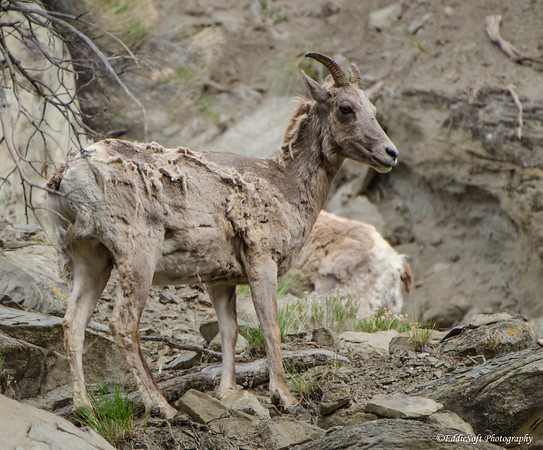 Lacking any interesting details surrounding the picture taking I’m flooding you with some facts about these interesting creatures.  They are quite nimble in rocky cliff settings thanks to their highly specialized hoof structure.  They have outer hooves that act as modified toenails allowing them to catch small protrusions and inner pads that are able to mold to uneven surfaces.  These features carry the male’s 130-310+ and the female’s 75-190 frames easily through the rocky cliffs of their preferred habitat. 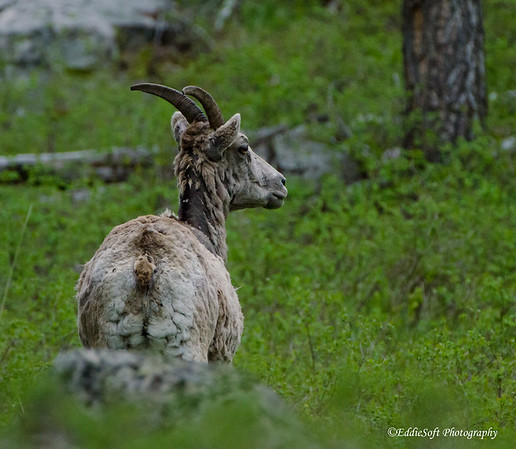 Well, I’m out of pictures for you, but hope you enjoyed a larger mammal for a change.  This happens to be one of my favorite sets of shots from the Yellowstone trip thanks to the compositions and various expressions that were captured.  Definite candidates for the fair season!

2 thoughts on “They Grow ’em Big Out There”