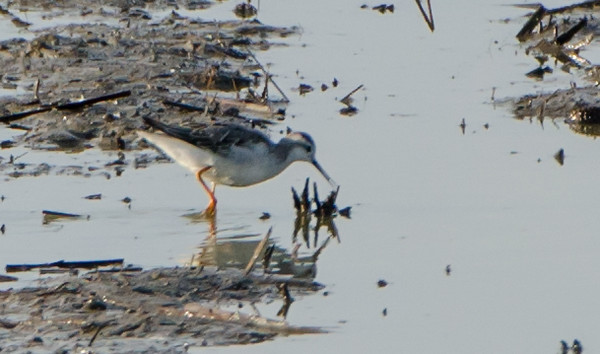 Eventually we located one hanging out in a distant part of the flooded field.  Our disappointment over going -2 for the day was all for not.  It may be a late find, but a +1 in the tin is a +1 on the list.  Within a 2 hour time frame on our bird outing we already had the two birds we spent all afternoon hiking for in Chautauqua National Wildlife Refuge.  Not a total waste since my brother got to experience Goofy Ridge.

Okay, out of pictures so better get to some meat.  This is a Red-Necked Phalarope, not to be confused with the much rarer Red Phalarope.  The latter happens to be on Ron’s Birding Life List – as I turn green with envy typing that.  He even got to have his name associated with the actual rare bird sighting this year.  He was photographing what he thought was a Red-Necked Phalarope.  Also there was a fellow birder (and apparently very knowledgeable) that was skeptical it was a Red-Necked as opposed to the Red Phalarope.  Ron said some calls were made to others to come confirm the sighting – long story short, it turned out to be the Red and they used Ron’s picture to aid in the identification.  How cool is that!?!  I’m still stoked to get the Red-Necked.  Not the best shots as you can tell, but good enough to get the call.  Sorry, but that is about all I can add to this bird – It doesn’t even get its own page on the Cornell site – just a few notes about how to distinguish it from the Wilson’s – which for the record is much easier in breeding plumage.

Okay, now for some help – I could use some confirmation if the first show is really a Red-Necked and not a Wilson’s.  After looking at it a bunch while writing this post I am beginning t think the lining on the back of the eye through the neck is more similar to the Wilson’s where the other shots have a more isolated line.  Let me know what you think and I’ll correct if necessary.

Based on the limited days remaining, look for some more posts very soon.

5 thoughts on “Another Find in the Flooded Flats”